The BugLady had some good luck stalking dragonflies in the summer of 2014, even the elusive Common Green Darner sat still for her (finally). She was also able to tiptoe up on some mosaic darners, and now she’s waiting for her identification skills to catch up. Darners are a group of large dragonflies 2 ¾ to 3+ inches long) in the family Aeshnidae, within which the mosaic darners, aka “blue darners,” are in the genus Aeshna. Why “mosaic?” Because their abdomens are decorated with a mosaic of blue/green/gray spots (a mosaic is a picture or pattern produced by arranging together small colored pieces of hard material, such as stone, tile, or glass). Lots of birders get interested in dragonflies—they’re another good reason to be out in the field—and the BugLady figures that mosaic darners might appeal to the kind of birder who loves identifying sparrows or shorebirds. Or gulls.

There are 20 or so Aeshna darners in North America, and identification can depend on colors and patterns that vary within a species, and on a good look at what Monty Python called the dragonfly’s “naughty-bits.” 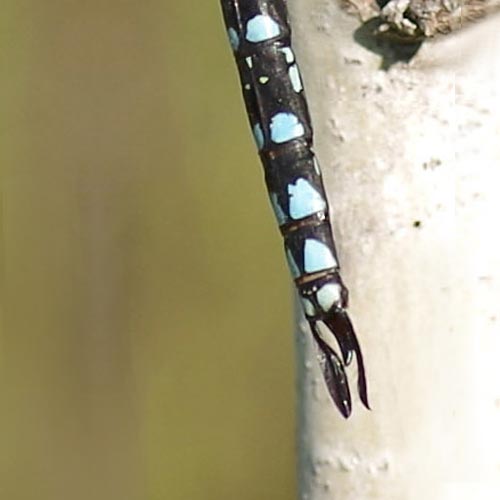 Let’s demystify those naughty-bits a little. The final (10th) segment of the abdomen of both male and female dragonflies bears a pair of structures called cerci (singular—cercus). The male has an additional structure called the epiproct below/between the cerci; the female has an ovipositor or egg-laying pore, but it’s located on the underside of the eighth segment. The female’s cerci, whose function(s) is/are not well understood, may be small or may, especially in the darners, look similar to a male’s. The male uses his cerci to clasp the female at the back of her head and his epiproct to grasp the top of her head, sometimes injuring her eyes in the process (the joined male and female are “in tandem”), then the female bends the tip of her abdomen up to his abdomen, near the base of the thorax, where he has placed some of his bodily fluids (they are now in a “mating wheel”). The BugLady wouldn’t have to be coy about this, but internet filters of certain BugFans who get BOTW at work have been known to reject episodes that use the Queen’s plain English. In some species, the cerci seem more brittle and are known for breaking off. Anyway, the cerci and epiprocts are shaped slightly differently in the various species of mosaic darners, and so is the first stripe on the side of the thorax (lateral thoracic stripe) (not the one on the top of the thorax, directly behind the eyes).

Is it straight (Lance-tipped darner) or notched? Deeply notched (Canadian darner) or shallowly (Green stripped)? Is the stripe all the same color or does it blend from blue to green? And what about those color patterns? Females of some species, like the Lance-tipped darner (so-named because the male has a spine on the end of each cercus) may have yellow, blue, or green stripes on a brown thorax, while the background color of the thorax of others, like the Canada darner, may be almost black or light caramel brown (both species were mentioned in a previous BOTW episode Not Green Darners (family Aeshnidae). A not-universally-embraced method of identifying a few mosaic species depends on the shape of the pale markings on the top of the second abdominal segment. And, oh yes—darners tend to have darker coloration on cooler days than on warmer ones. 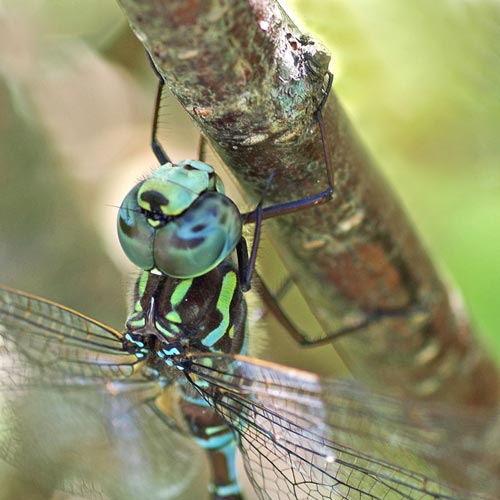 The Green-striped Darner (Aeshna verticalis) is a Northeastern darner, found from Minnesota/northern Iowa/southern Canada to Nova Scotia to New Jersey; it is rarely found south of Ohio. Its life story is similar to that of other mosaics. Green-striped Darners may feed until dusk on small, flying insects that they are able to eat while on the wing; like other dragonflies, it can be found in feeding swarms far from water. Kurt Mead, in Dragonflies of the North Woods, says that they have the “reputation of repeatedly hovering over the same area.” In Dragonflies of Wisconsin, Legler notes that they “may be found resting on tree trunks or hanging from branches,” which is exactly where the BugLady found them, toward the end of the day.

The breeding habitat is marshy, sedgy wetlands, including ponds and sometimes slow streams. Males patrol along the vegetation at the wetland’s edge, chasing other males away. Females lay eggs in the stems of aquatic vegetation, just above the water line, using their impressive-looking spiny ovipositors to make slits (thanks to BugFan Freda for the shot of the mosaic ovipositor). Young mosaic darners (naiads) prey on their aquatic neighbors from perches on aquatic plants and will even eat a tiny fish if they can catch one. They overwinter under water and emerge in early summer of the next year. 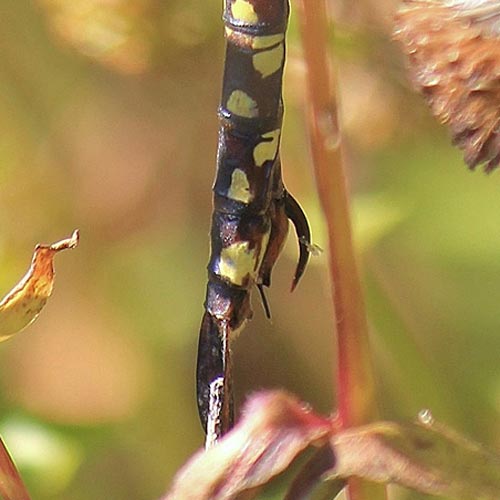 Sources agree that its bright colors and an all-green thoracic stripe that is notched shallowly/obtusely are diagnostic for this green-faced dragonfly (the second, or posterior, lateral thoracic stripe blends from green to blue). A North Carolina site claims that this dragonfly can be “called” in flight at 100 feet using binoculars, but the BugLady’s not there yet. Sources add that it is similar to the “duller” Canada and Lance-tipped darners and that all three species have similar, paddle-shaped cerci.

Besides Mead’s and Legler’s books, the BugLady recommends the Beginner’s Guide to Dragonflies by Nikula, Sones, Stokes and Stokes for your thorny dragonfly ID problems. On-line, try the Wisconsin Odonata Survey, the Wisconsin Dragonfly Society and, for an overview, Odes for Beginners website. Thanks to BugFan Ryan for identifying one of the Green-striped dragonflies; as always, any misidentifications belong to the BugLady.