What’s the difference between a grasshopper and a locust, anyway?

It is not, as various reputable (not “fringe”), on-line Q&A sites would have you believe:

The family Acrididae, the Short-horned (short-antennaed) grasshoppers, contains some of our most familiar grasshoppers and “locusts.” It has seven subfamilies, each containing a mixture of insects called grasshoppers and insects called locusts. You say there’s a Carolina grasshopper crepitating over the dusty road; the BugLady calls it a Carolina locust;—it’s all good. In short, the labels seem to be bestowed capriciously; like mushrooms and “toadstools,” there are no anatomical features that separate the two. “What’s in a name?”

The whole “swarming” thing is pretty interesting, though, and some people do base their definition of locust on whether it’s a species that occasionally gets a yen to congregate and develops a swarm phase. A signal from their environment (unusually high rainfall that results in lots of vegetation/food) flips a switch in some species of Acridids, causing them to drop their solitary habits, change to a darker color, and adopt a more gregarious worldview. One theory is that in response to a great eating year, grasshoppers produce many more little grasshoppers, and they get crowded. In crowded situations, grasshoppers bump into each other more, which they don’t like. Their response to all the extra touching, (the back legs are said to be especially sensitive) is to produce serotonin, which causes them to mellow out and become more sociable—and to breed more and eat more (they may practice a little cannibalism in this phase).

Whether flightless or blessed with flight, these masses of grasshoppers/locusts can cover a whole lot of ground and eat masses of vegetation. Swarming is not considered to be a kind of migration, but a movement away from a high population density toward a less crowded one. It’s estimated that a swarm of the now-extinct Rocky Mountain locusts (Melanoplus spretus) in the 19th century covered an area of 198,000 square miles and that the grasshoppers weighed 27.5 million tons. The people who measure these things tell us that one ton of locusts (a unit that the BugLady has trouble picturing) can eat as much as 250 people can—or as 10 elephants can.

Speaking of names, the infamous, three-inch-long, flightless Mormon cricket is actually a shield-backed katydid, and don’t even get the BugLady started on cicadas, those totally unrelated insects who have also been tagged with the name “17 year locust.”

But we digress. What does this have to do with our insect du jour? Although it seems not to participate in swarming behavior, the Green-Legged Grasshopper (Melanoplus viridipes) (viridipes means “green foot”) is in the same genus, Melanoplus, as the Rocky Mountain locust and some other notorious swarmers. It has two aliases —Hebard’s Green-legged locust and Green-legged Spur throat grasshopper (within the family Acrididae, it’s in the Spur-throated grasshopper subfamily Melanoplinae). The GLG is one species in a complex of about a dozen, very similar species. 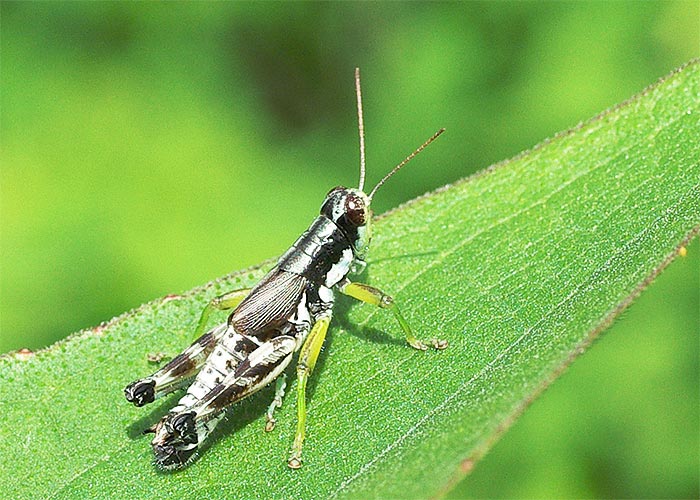 According to Wikipedia, a species complex is

…a group of closely related species, where the exact demarcation between species is often unclear or cryptic owing to their recent and as yet, usually, incomplete reproductive isolation. Such groups of species with a complex-type relationship between species may occur in a line—undergoing rapid speciation—or where such speciaton has recently occurred, meaning species separation mechanisms or traits which distinguish species have yet to develop in full.

In other words, these are very similar-looking species that do not interbreed, and they may be, as bugguide.net says, “really just regional variants (replacing each other geographically) of one species, but perhaps not.” The insects may be evolving in front of our eyes, and, with DNA analysis, our ability to separate them correctly is also evolving.

Bugguide.net describes the range of the GLG complex of species as “eastern Minnesota through Wisconsin, Michigan, and southern Ontario to Vermont and western Massachusetts, south to northern Georgia and Arkansas, west to eastern Nebraska,” and its range map extends north toward Hudson’s Bay. The Upper Mississippi River valley is considered the stronghold of the species Melanoplus viridipes; it’s found in one county in Michigan and is considered rare in Indiana. It likes grasslands, shrubby fields, and woods edges.

The BugLady might have named this the Black and White grasshopper, except that it also comes in brown (with green legs, of course, its first two pairs of legs are green, and the rear legs are green and black). Interestingly, of the pictures at bugguide.net, the majority of the brown GLGs are females, and the majority of black and white GLGs are males, but the descriptions don’t mention this sexual dimorphism. Usually, a grasshopper with short wing pads is a young one (a nymph), but the GLG is a short-winged grasshopper, with wings that are sometimes only half the length of its abdomen; and some of the forest-dwelling species in the complex are wingless.

GLGs overwinter as eggs (it’s suspected that some members of the complex may overwinter as late-stage nymphs), and when spring comes, they hit the ground running. They feed on a variety of greenery, develop rapidly, and are adults by summer. They are one of a succession of grasshopper species that bluebirds feed to their nestlings.

This is, by the BugLady’s count, the 300th episode in the series (The BugLady’s count differs a bit from that of the awesome BugFan Homer, who, with his talented crew, maintain the series archive on the UWM Field Station website. The BugLady would doff her hat to Homer, if she wore one. Thank you.). Little did she know, on that sunny August day in 2007, that it would come to this. In the meantime, she photographed a seriously cool bug recently, and can hardly wait to write about it.