Common names tell us about the appearance, toxicity, odor, folklore, uses, habitats and other aspects of organisms as they are observed by us, out here in the field where the rubber hits the road. But common names do not tell us who’s related to whom—for that, we turn to scientific names and official classification. For example, when we here in God’s Country hear the words “June Bug,” we picture the rusty, shiny, chunky beetle that emerges from the soil in late May and spends the next month buzzing against and clinging on the screens at night, only to disappear underground by sunrise (that’s why those hard wing covers—elytra—were invented, to protect the soft, flying wings from wear and tear).

In the Southeastern quadrant of the U.S., the June Bug du jour is the day-flying Green June Beetle (Cotinis/Cotinus nitida), in the scarab family Scarabaeidae; our rusty pal is called the May beetle there. The GJB’s range extends from New York (and sometimes even farther north) west to Kansas, just nicking the edge of Wisconsin, and then it plunges south through the Gulf Coast. The BugLady saw a large, green beetle in escape-mode a few years ago that was probably a GJB, but this one was photographed in New Jersey. It’s also called the Fig-eater, a name it shares with a nearly identical scarab (C. mutabilis) that occupies the southwestern corner of the U.S. One source told of children in the South tying strings to GJBs and “flying” them on their “leashes.” 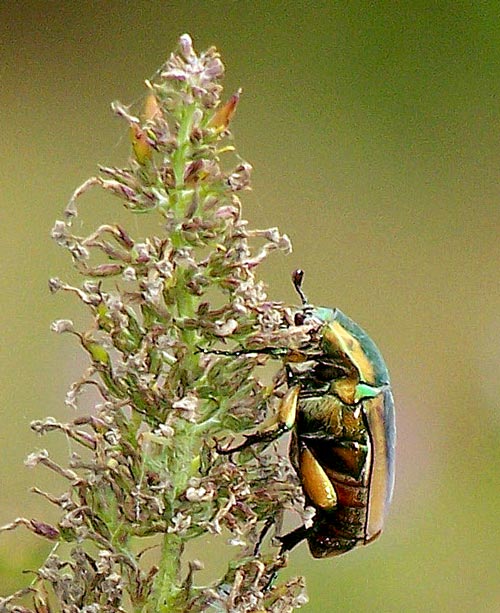 This is a beetle that Cooperative Extension folks and the various pest control companies love to hate, but the BugLady found amazingly contradictory information about it, both on-line and off (and she was looking at official documents, not the fringe sources).

Habitat? Look for it at the intersection of agriculture, grass-scapes and fruit trees. Following a pheromone-induced romance, Ms. GJB tunnels as deep as 8” underground. There she deposits up to 20 eggs at a time in a ball of soil she compacts and glues together. Eggs are laid under hay bales in the fields, under moist heaps of manure and compost and mulch, and beneath grass (including pastureland) that has been visited by a manure spreader (either 4-wheeled or 4-footed). The Scott’s Lawn Care folks say that large riding mowers and larger lawns have abetted the spread of GJBs.

Within these sheltered, organic spots, the white, C-shaped larvae feed at night, coming to the surface and leaving a small mound of dirt to mark their passing. In winter, they dig down as far as 30” to overwinter as semi-mature larvae. The large 2” larvae look similar to the “white grubs” of our brown June Bugs (which are also scarabs). Unlike a June Bug larva, a GJB larva often use the bristles on the top side of its exoskeleton to wriggle along on its back. GJBs pupate briefly in the soil during late spring, in small cells that they fashion from dirt and a “sticky secretion.”

So, what are the grubs eating under there? Pick your answer, all from the literature:

Do they mellow out as adults? You decide, again from the literature:

In his 1922 monograph about GJBs, F. H. Chittendon recounts an anecdote from 1903 about GJBs that were trying to enter a honey bee hive and were being stung ineffectually by the bees that were guarding the hive (and that were being, he lamented, distracted from their honey-making duties). The slowly-moving beetles “appeared to be utterly unaware of their danger and as stupid as the Scarabaeidae are generally accredited with being, at least when not in flight.” A little judgmental there, Mr. C! About the Green June Beetle Chittendon also says that “ Opinion up to now is that it is an occasional pest, but that opinion is by people who haven’t studied it.” Ninety years later, it seems like some of the answers are still up for grabs.

The BugLady expects to get an earful from almost-BugFan Tom in the Deep South about what GJBs do to his produce (we’re covering the tomatoes tonight, Tom—frost advisory).