This has been a long, cold spring and the BugLady is seriously in need of a butterfly fix. It’s no coincidence that the earliest butterflies of spring are not nectar sippers—there are few flowers in sight in April. Our first butterflies are Anglewings and Mourning cloaks, which overwinter as adults and feed on sap, rotting fruit, carrion and dung. The tiny Spring Azures eat little, getting moisture and minerals from mud puddles.

During the Riveredge Nature Center’s annual Butterfly Count, the BugLady’s butterfly books fall open automatically to the fritillary pages because she has a terrible time telling them apart (or spelling them, for that matter). These are beautiful creatures (in the brushfoot family Nymphalidae) whose orange wings sport a checkerboard of black spots, bars and chevrons.

The Great Spangled Fritillary (Speyeria cybele) (GSF) is named for the silvery spots on the underside of its hind wing. With a wingspread of 2 ½ to 3 ½ inches, the GSF is the largest of the fritillary bunch, but there are a number of slightly-smaller-but-similarly-colored fritillaries in the area The helpful diagnostic tips in the butterfly books are best seen when a specimen is in the hand, not ten yards away, from the rear, saying “adios”. The GSF is also the most common species, which is surprising, since its reproductive strategy is kind of sketchy. 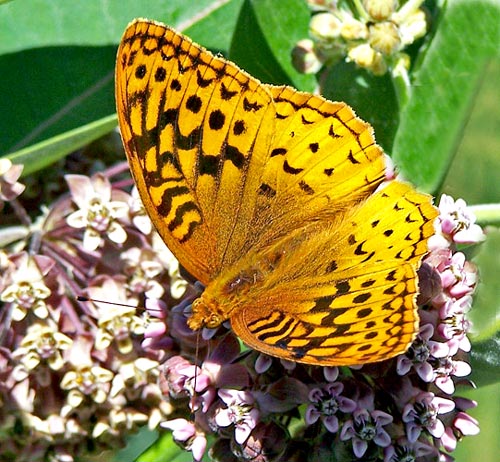 GSFs can be seen over a good chunk of North America. They like open spaces—woody clearings, gardens, wet and dry grasslands, and other open areas as long as there’s a woodland near-by. They are strong flyers and vigilant feeders (for “vigilant” read “camera averse.”).

Adult GSFs sip from a variety of sun-loving flowers, and males get additional nutrients from the moisture of mud puddles and from animal dung (one critter’s trash is another critter’s treasure). Caterpillars of many species of fritillaries, including the GSF, feed on violets. According to Wagner in Caterpillars of Eastern North America, “Fritillaries are secretive, nocturnal, ground-dwelling caterpillars; look for them by turning objects and inspecting brush in the vicinity of violet plants. Last instars are sizeable insects capable of consuming two or more grown violet plants.” Despite their impressive, branched spines, GSF caterpillars fall prey to insect, spider and bird predators. 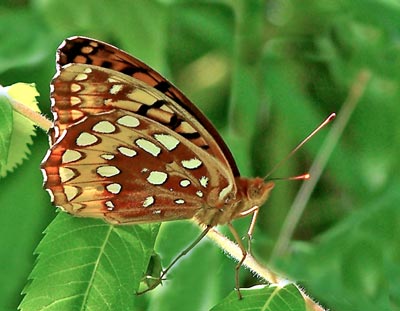 Male GSFs emerge in early June and start patrolling for females, though the females will not exit their chrysalises until about a month later. Females outlast the males, though, and lay their eggs in late summer. To make it until egg-laying time, females may aestivate briefly during high summer in the shelter of vegetation. Ms. GSF (and Mother Nature) seems to take this parenting thing a bit too casually. Wagner goes on to say that

The life cycle of our large fritillaries seems ill-conceived. Females lay the eggs in the fall, and only rarely bother to place the eggs on violet leaves. The first instars hatch two to three weeks later, and will drink water, but will not eat for seven to eight months. Few weather the winter. But nature is compensatory—fritillaries are our most fecund butterflies with some species laying over 2,000 eggs.

GSF numbers wax and wane. The butterfly watchers of a century ago wrote that agricultural plowing disturbed violet habitat more than grazing did, lowering GSF populations. When spring comes and they are roused from their aestivation, the young caterpillars must connect with the tender, new violet leaves. It’s hypothesized that global climate change may be problematic for fritillaries because they might miss the “violet connection” if either the flower or the butterfly appears on the landscape too early.

To see GSFs (and their doppelgangers) in the flesh, come out for the Riveredge Nature Center Butterfly Count on July 9 (8:30 AM to 3 PM; Come for all or part of the day. Bring a lunch. Beginners welcome.). This Count is one of the North American Butterfly Association’s “Fourth of July” counts. For information, contact Riveredge at 800-287-8098 or RiveredgeRiveredge Nature Center. The more eyes, the merrier. It’s called “The Patagonia Picnic Table Effect,” but don’t get the BugLady started on that!

P.S. In response to the BOTW on scuds, BugFan Don writes “Back in the good old days when I still went duck hunting, we would get ducks like bluebills and ring necks that had lots of scuds on their feet and leg feathers. They would still be alive when we got the ducks home. To suggest that these diving ducks carry scuds from pond to lake is not unreasonable.
Duck hunters called them shrimp. I’ve heard stories about seeing retrieving dogs covered with the things. These tend to be stories of the past though. No one seems to see scuds in such abundance any more.
The minnow sellers in western Minnesota have introduced fathead minnows into a lot of the big shallow lakes that were used by the divers that fed on the scuds. Bluebills leave Minnesota in worse shape than when they entered. It takes a really severe winter to kill the fatheads so they tend to persist and they decimate the scud populations. The divers responded by moving their migration and resting sites further west, into South Dakota. The minnow merchants prospered, in spite of laws that prohibit moving live fish from pond to pond.”
John Muir was right—everything is connected!
Butterflies

A Passel of Predators