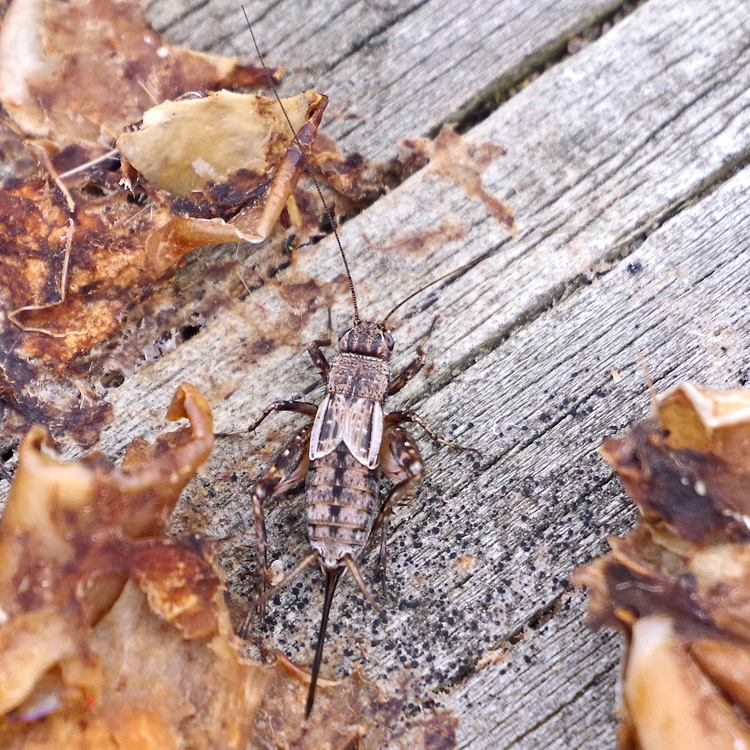 But, a few years ago the BugLady was browsing through The Songs of Insects by Elliot and Hershberger (it comes with a CD!), and she paused at the chapter about Ground crickets. They are common, said the book, and if you see something that looks like a small, immature Field cricket, it might just be a Ground cricket. And it turns out that she has seen what she took to be Field cricket nymphs, and she’s been trying to photograph them, but when they’re out in the open, they don’t dawdle. Ground crickets are generally found in woods or fields, but one species lives in sphagnum bogs, and another is listed as “marine/intertidal.” 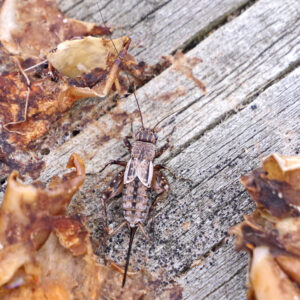 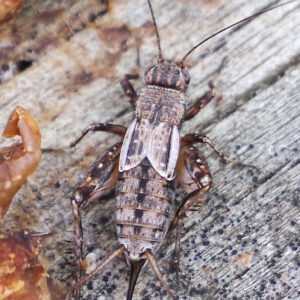 While Field crickets , are close to an inch long, with a massive head and face, Ground crickets are smaller and not as robust-looking. Ground crickets have a bristly thorax and abdomen, wings that are either long or short, spiny legs with spurs at the tips, and brown and black coloration that provides camouflage in the leaf litter. There can be a lot of variation within each species, and identification (even to genus) is not a slam-dunk. Both sound and habitat can be important clues. 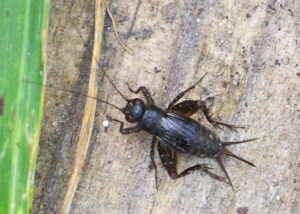 Gray Ground crickets are about 3/8” long (minus their two to three “tails” – the two cerci and the female’s ovipositor), and because of their fuzzy exterior, they look pale , except when they don’t .

They’re found across southern Canada and the northern US, and their preferred haunts are sandy or gravelly and sparsely vegetated – not surprising, then, that the BugLady found this one in the dunes (where someone had thoughtfully dropped some fruit onto the cord walk). In an interesting article titled “Landscape Ecology of Singing Insects 1: Glacial Influences ,” author Carl Strang ties the Gray Ground cricket strongly to “the beaches and dunes around the Lake Michigan edge.” John Himmelman, in a note on Gray Ground crickets in his Guide to Night-singing Insects, says “Few crickets in our area can take advantage of the dry habitats this species calls home. … The most noticeable feature of the Gray Ground Cricket is the long, bristly fur. My guess is that it is an adaptation to its habitat, which allows it to retain moisture.”

Ground crickets’ songs include both continuous trills and pulsating buzzes, and although the Gray Ground cricket is more active in the daytime, it sings both day and night. If your ears are younger than the BugLady’s, you may be able to hear its calls, which Himmelman describes as a “Soft, high-pitched, somewhat sputter trill.”

They are omnivores (as are many Orthopterans), feeding on a variety of low plants, organic debris, and decaying fruit.

Ground crickets may not be robust, but they’re hardy. They start calling by early summer and continue until the first frost. The BugLady has written about the nutritional rewards some male insects like Tree crickets provide for females (it’s called courtship feeding). Female Tree crickets hike themselves up onto the male’s back and sip fluid from a groove on the back of his thorax – while she’s up there, she’s easier for him to mate with, and the nutritious goo she imbibes increases her odds of producing healthy eggs. Standard stuff. So the BugLady was unprepared for the female Ground cricket’s somewhat more invasive approach to this concept. Himmelman tells us that “Some males within this subgroup have a gland that produces a special quaff for the female that has chosen him. To access the nutritious meal, the female chews off the tip of a spur on the male’s hind tibia. This ‘opens the cap’ and the fluid flows forth.” Most Ground crickets overwinter as eggs that are laid in damp soil.

A few days after she found her first Ground cricket in the dunes, the BugLady found a darker, shinier species of Ground cricket at the edge of a wetland at Riveredge Nature Center. Maybe a Striped Ground cricket, or a Spotted, or an Allard’s, or …. The BugLady loves finding something she’s never seen before!