Wild grape is taking over the universe. It used to be kept in check by the cold winters here in God’s Country (the BugLady does not use the term “God’s Country” lightly here. In 1886, after extensive Biblical study, the Reverend David Van Slyke concluded that the Garden of Eden had, indeed, been located in Wisconsin (near the present-day community of Galesville, just north of La Crosse). Today’s wimpy winters may not be enough to keep wild grape under control, but here are two little moths that can help. Grape arborists are a little less enthusiastic about that help.

The Grapevine Epimenis (Psychomorpha epimenis) is an Owlet moth (family Noctuidae). A number of sources (who apparently all read each other’s books) suggest that its scientific name means “has the soul of a butterfly.” The GE certainly looks like a small butterfly (wingspread about an inch), and it is a daytime flyer in woodlands and edges in the eastern half of the U.S. and into Ontario. Adults nectar on the flowers of a few early-blooming fruit trees like cherries and plums and on sumac, and they like redbud. Like butterflies, they “puddle”—getting minerals at the edge of mud puddles. The GE shows up in the accounts of a good many state butterfly association field trips (as in “We also saw a…”). An honorary butterfly. 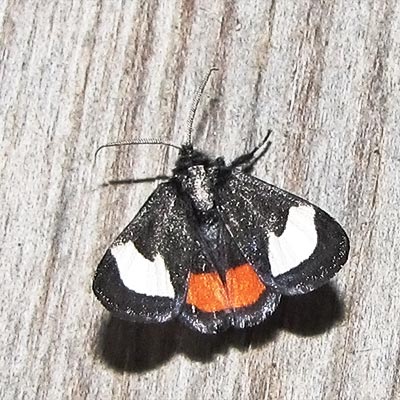 In his “Injurious insects of the orchard, vineyard, field, garden, conservatory, household, storehouse, domestic animals, etc., with remedies for their extermination” (1883) Matthew Cooke says “This caterpillar lives in a sort of nest formed by fastening several leaves together with silken threads.” The zebra-striped GE caterpillar feeds inside its characteristic grape-leaf structure, and it makes several shelters before pupating. In his worthy Moths and Caterpillars of the North Woods, Sogaard speculates that “the bright colors and bold markings of caterpillars and adults advertise chemical defense, especially at close quarters.”

Female GEs lay their eggs as the new grape foliage emerges, and by the beginning of summer the caterpillar has completed its growth and pupated in soft wood or other dense plant material. It enjoys a long rest, overwintering in its cocoon. 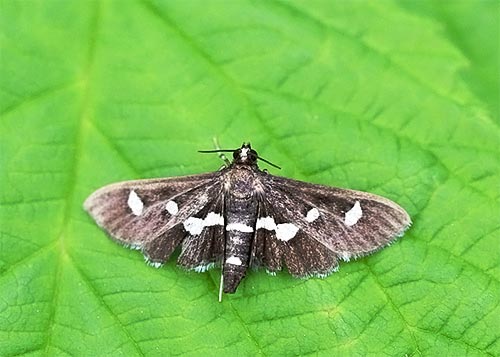 The Grape Leaf Folder (Desmia funeralis / Desmia maculalis) is a small (wingspread of about ¾”) member of the snout moth family Crambidae (but it’s a “minimally-snouted” snout moth). There are two species names listed because some sources say that Desmia funeralis (the grape leaf folder) is well-nigh indistinguishable from D. maculalis (the grape leaf folder) without examining one end or the other under high magnification. Others say that D. maculalis tends to have some white scales on the top of its head. They look so much alike that range information is sketchy. The BugLady will wait for the dust to settle, but in the meantime, her moths have the white spot.

GLFs get their name from the habit of their caterpillars of folding grape (and Virginia creeper, redbud, and some evening primrose) leaves and webbing them shut. Apparently, they start rolling/folding at the edge of the leaf and work inward, keeping the leaf’s top surface facing outward. The silk produced by the caterpillars shrinks as it dries, bending the leaf. As the BugLady understands it, each leaf requires at least 10 tethers, and there are 200 to 300 individual silken filaments in each “tether.” The caterpillar feeds on the leaf edge that’s pulled inside.

Folded leaves provide a spot for feeding and are used in later life stages, too. Adults emerge in spring, lay eggs on new grape leaves, and the caterpillars hatch out soon after. When they are small, a group of larvae collaborates to wrestle/tie a few leaves together and feeds as a group. Older caterpillars roll their own (they construct at least two shelters before pupating), and whether they roll or fold depends on the thickness of the leaves. There are several generations of GLFs a year (the second is more numerous than the first); females may lay their eggs in previously-folded leaves, GLFs pupate in an “envelope” made by cutting, folding and stitching a section of leaf, and the final generation of GLFs overwinter as pupae in folded leaves that have fallen off the vine. Adult GEs, day flyers that are also out and about at night, may take nectar. 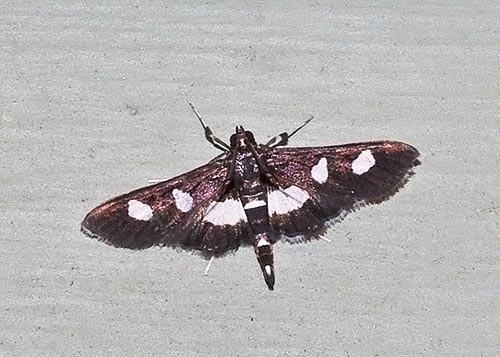 Female GLFs have two white spots on their hind wings, and males have one. The abdomen of the female pictured here is much thicker that the male’s. One on-line reference suggested that GLFs may be one/two of several small, diurnal, white-spotted black moths that may be wasp-mimics.

They can become pests in vineyards—high infestations (the GLF made a Parasite-of-the-Day website) damage leaves, which may lower production, damage fruits, and affect the next crop. 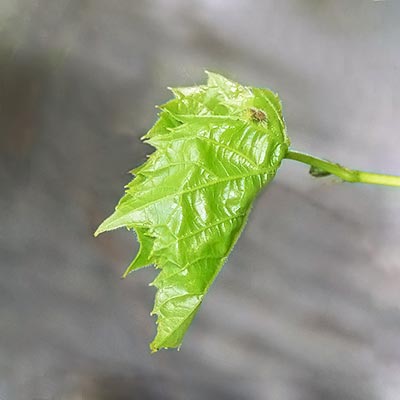 The BugLady is not guaranteeing that the folded leaf, pictured, was actually perpetrated by one of the two suspects here, but you get the idea.

The Porch at Night