The BugLady keeps hearing that the summer movie season produced no blockbusters, so she’s running a second blockbuster BOTW in a row.

The goldenrods in the BugLady’s field are exuberant, with new, brilliant yellow flowers opening daily. Goldenrod blooms late, produces a bonanza of pollen (there’s not much nectar there), and is the embodiment of the insect enthusiast’s credo—“Looking for insects? Check the flowers.” Insects—especially flies, bees and wasps—are so excited about it that they’re bouncing off of each other in an effort to reach the flowers (there seems to be a rock-paper-scissors hierarchy to who bumps whom from a flower. Hint: stingers rule). The BugLady wrote about goldenrod’s insect community in 2010; to see who starred in Act I, check Bug o’the Week – Goldenrod Watch.

Visitors come to goldenrod for the pollen, to leave eggs, to ambush their prey, and sometimes just to sit a spell. The BugLady stands in the goldenrod patch looking for new additions to her goldenrod list and being thankful, once again, that she has no close neighbors to notify her family that she’s finally lost it.

A photography note—the BugLady’s workhorse Pentax has, alas, never met a yellow it didn’t embrace (especially when the sun is out), and stripping the excess from the pictures has been only moderately successful (lots of yellow on the cutting room floor). At least BugFans won’t have to grope around for their eclipse glasses.


What might you see if you take yourself out to a goldenrod patch? 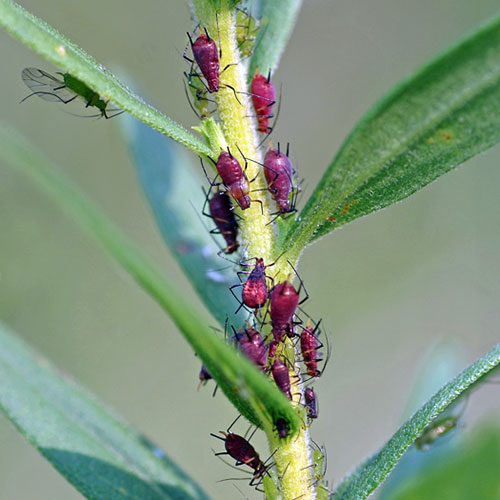 BALD-FACED HORNETS (Vespula maculata) looking for nectar—and possibly for tiny insects to masticate and feed to the larvae that wait in one of those football sized/shaped colonial nests. 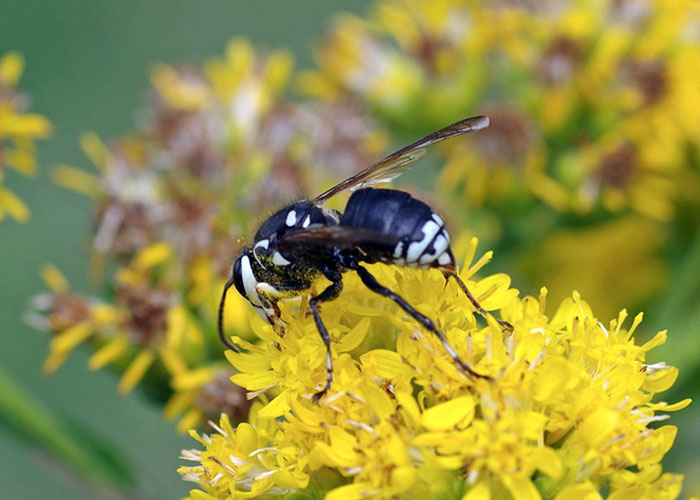 BEE FLIES (family Bombyliidae) that sometimes hover over the flowers as they extract pollen and nectar with a long proboscis. 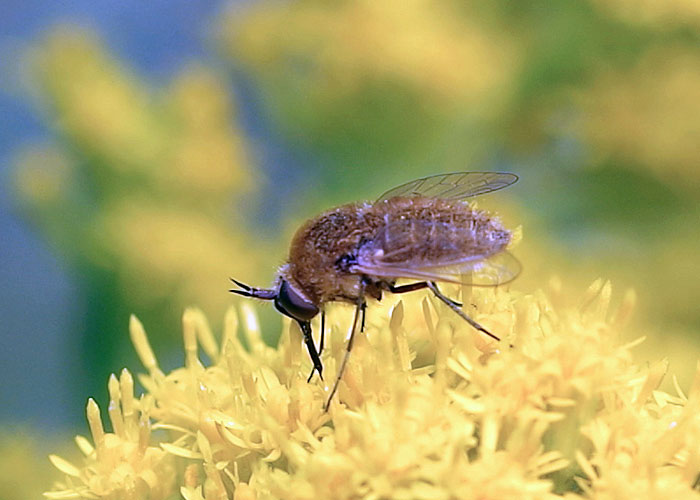 A CRAB SPIDER (family Thomisidae), all tucked in, business end up. 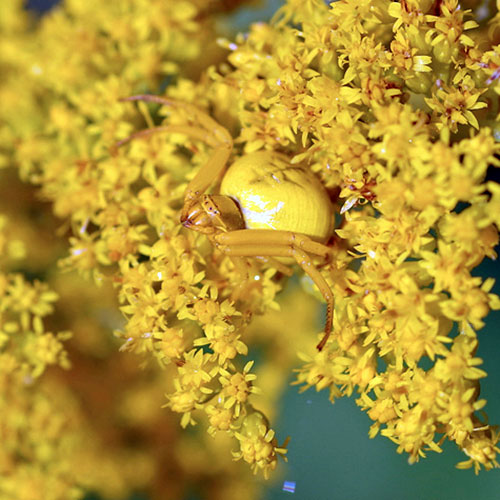 DADDY LONGLEGS (family Phalangiidae)—not true spiders, but spider relatives that stalk their prey on foot and do not spin webs. They also do not (NOT) bite people. One source describes them as “a Rice Krispies with legs.” 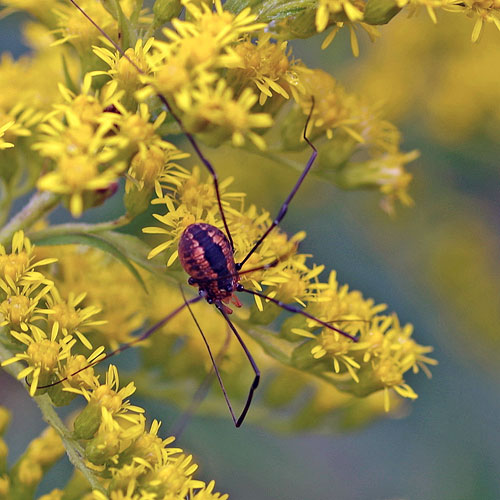 A FEATHER-LEGGED FLY (Trichopoda sp.) walking across the spray of goldenrod, dipping the tip of her abdomen to touch the flowers. The eggs she deposits will hatch into larvae that will jump aboard the next stinkbug, seed bug, or squash bug that comes along and will parasitize them. 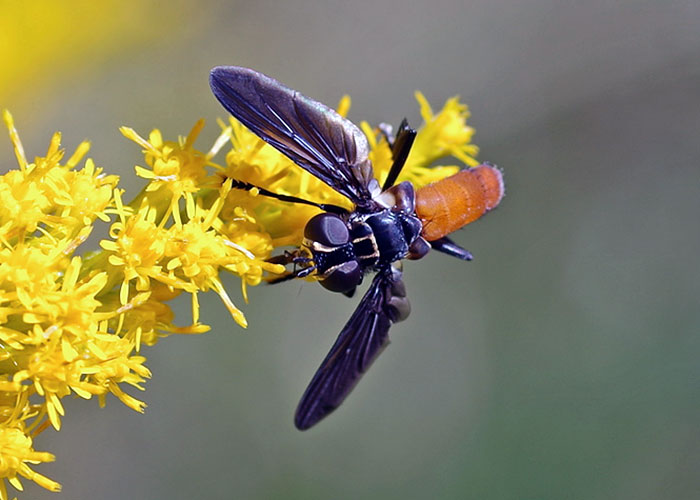 GREENBOTTLE FLIES (Lucilia sericata) that, despite the unsavory reputation of their larvae in service of the CSI folks and the medical profession, keep their feet clean (mostly), feeding on nectar and pollinating flowers (when they’re not laying eggs on something dead). 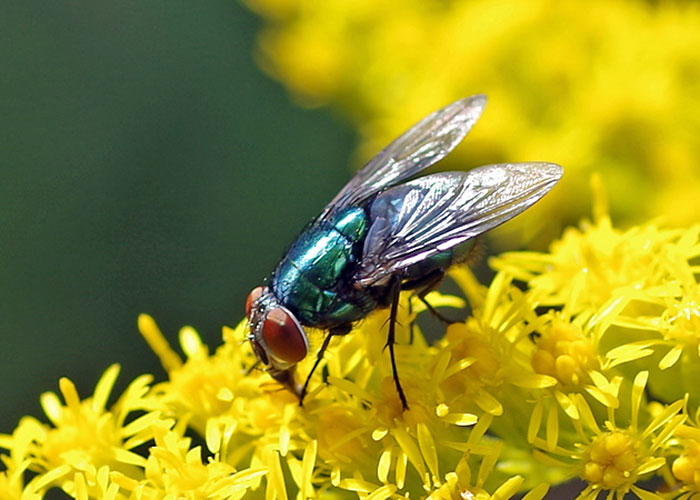 JAPANESE BEETLES (Popillia japonica), which include goldenrod on the list of more-than-300 plants that they will eat. 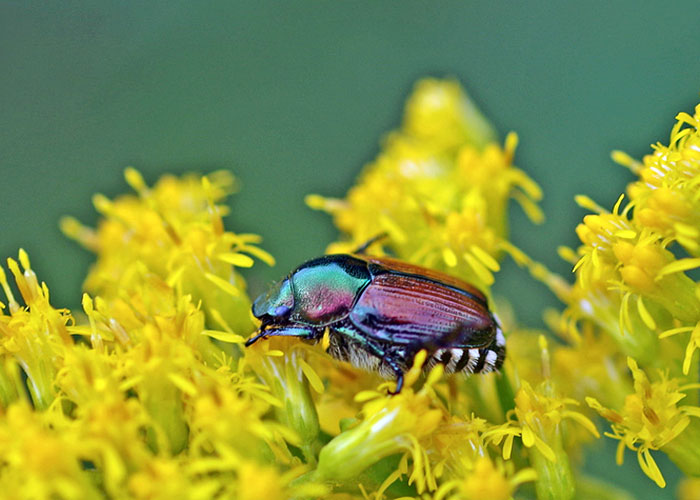 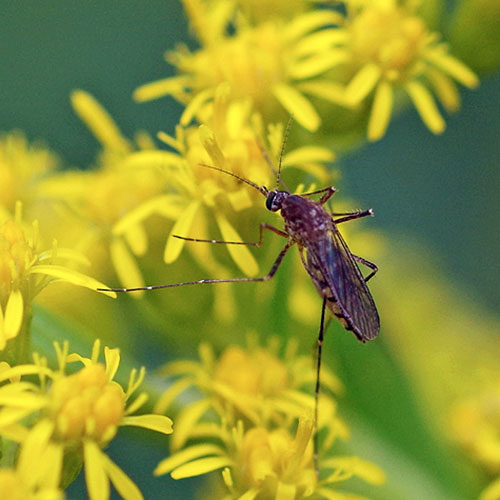 A NORTHERN CORN ROOT WORM (Diabrotica barberi). The corn in the field next door, close to nine feet tall, may be the origin of this beetle. Or it may not, since they also eat other grasses, and also members of the squash, bean, and aster families. 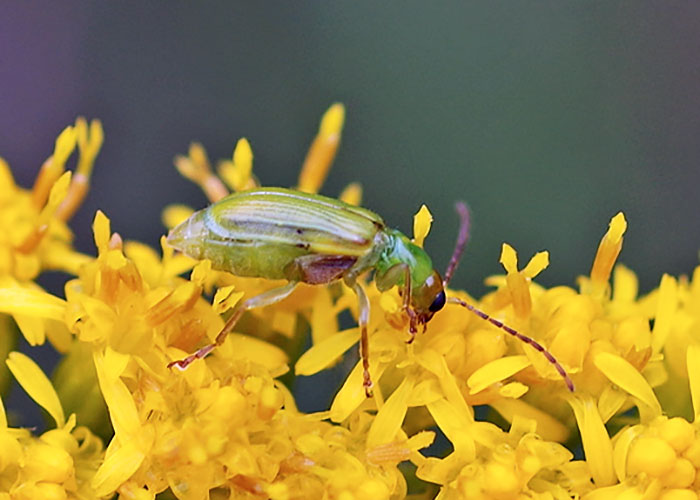 An ORANGE/YELLOW-COLLARED SCAPE MOTH (Cisseps fulvicollis), which graces the flowers both day and night. Smaller than the similar-looking, earlier-flying Virginia Ctenucha (the “C” is silent like the “R” in “fish.”), the adults are nectar feeders, and the caterpillars eat grasses, rushes and lichens. 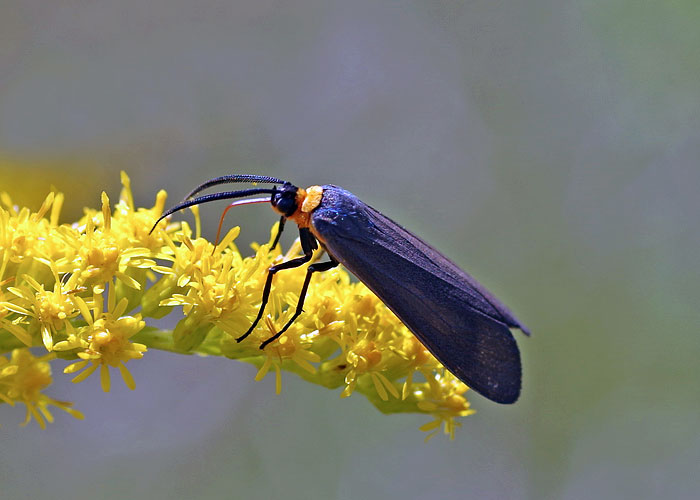 SWEAT BEES – Some insects dine-in, and others come for carry-out (usually because they need pollen to provision nest chambers for their eggs). Special sacs on the legs are one way to transport pollen; other kinds of bees may carry it in bristles on their legs or abdomens. 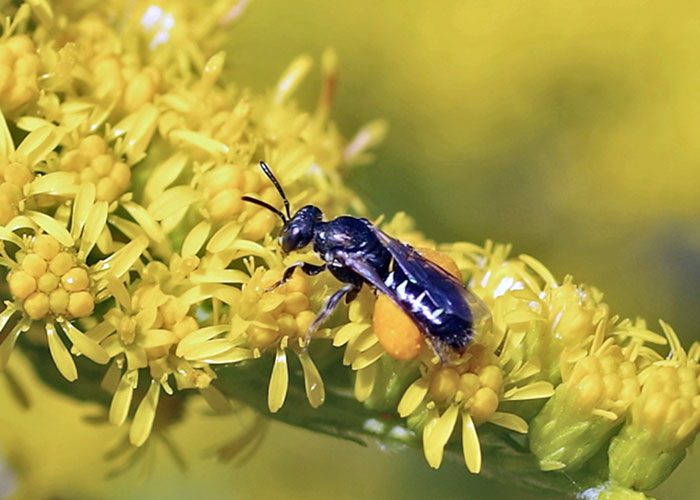 A PINE TREE CRICKET (Oecanthus pini), here hiding in a clump of flowers on a chilly afternoon, part of the delicious chorus of tree crickets and katydids and field crickets that sings in the BugLady’s field day and night. Hear it at songsofinsects.com. 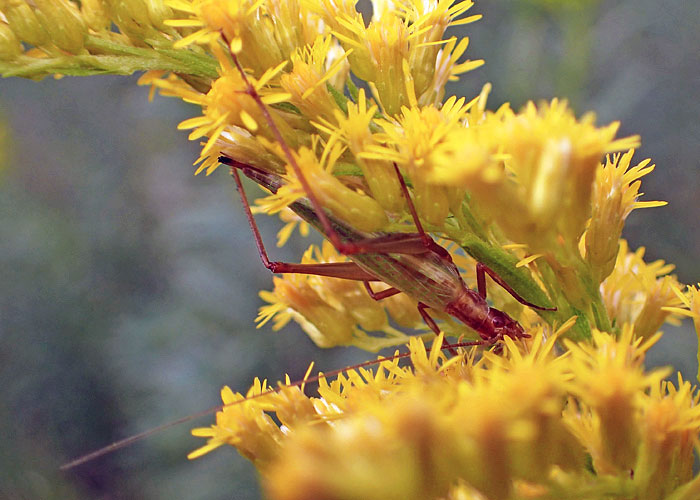 You know the drill by now – Go Outside – find some goldenrods!