The unassuming Goldenrod Leaf Miner (Microrhopala vittata) is listed as “common” over most of the U.S. and into southern Canada (the BugLady has apparently been overlooking it all this time). It’s in the Leaf beetle family Chrysomelidae. The genus name comes from the Greek micro, which means micro, and rhopal, which means club and refers to its clubbed antennae; and as BugFans undoubtedly recall from the recent episode on “buttercup beetles,” the species name vittata means striped. The GLM is a small, rugged-looking beetle with pitted thorax and elytra (the hard front wings that protect the membranous flying wings) and flashy red-orange racing stripes. There can be lots of variation within the species, which has occasionally resulted in different GLM models being designated as separate species. It’s a small beetle with an interesting role in its community.

GLMs are, not surprisingly, found on goldenrods, often nestled in the dense vegetation of the goldenrod bunch galls at the top of the stem, and they especially like the Tall Goldenrod, Solidago altissima. Members of the genus Microrhopala tend to gravitate to members of the Aster/Composite family, and GLMs are almost exclusively goldenrod feeders. The “miner” in the GLM appellation is not the adult, but the larva, which feeds and tunnels (mines) within the leaf. Mining surrounds the larva with food, and it also offers protection from predators. Adults chew on goldenrod leaves from the outside, excavating dots and dashes in the surface of the leaf.

GLM eggs are laid in bunches on the underside of leaves—Mom deposits up to eight heaps of eggs per leaf, each pile with about three eggs in it, and she covers them with a smear of her feces to discourage predators and parasites. The larvae hatch and are gregarious, and a single leaf may host as many as nine of them. It’s a trade-off—a big gang of larvae do a better job of initiating a mine, but they also finish off the edibles within the leaf faster; then they must leave their leafy shelter and move to another spot (there’s danger out there in the open). Afflicted leaves look fried and may shrivel.

Having eaten away the tender tissue between the top and bottom surfaces of the leaf (they leave the tougher veins), the larvae proceed to pupate in the now-empty space.

So far, so good. A typical life story of a typical leaf beetle, yes? Yes, but the humble GLMs are movers and shakers in their community, and the GLMs’ ripples extend far beyond their goldenrods. Like many insects, they have outbreak years, but a GLM population boom may be the vital domino to topple in the conversion of field to woodland (a semi-orderly process called plant succession ). 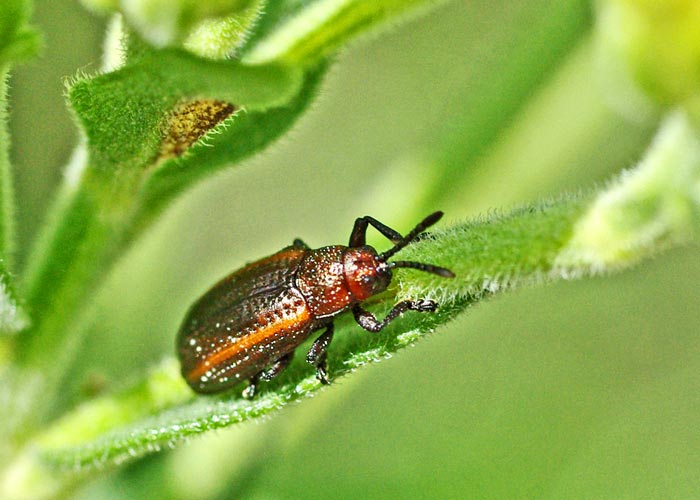 The GLM is a “keystone species,” a species whose effect on its community is out of proportion to its physical presence in the community. It likes goldenrods, and goldenrods like grasslands, sometimes dominating them. Research by Carson and Root demonstrated that large populations of Tall Goldenrods suppressed the other plants in grasslands, and that if a beetle boom defoliated the Tall Goldenrod, competing plants could gain a foothold and increase diversity. The impact lasted for several years. Because GLM feeding damages the leaves, which are shade-producers, the beetles inadvertently manipulate light levels closer to the ground. Some of the species that take advantage of the extra sunlight are pioneer woody plants—shade intolerant shrubs and trees. GLMs become a factor in plant succession, moving a grassy old field community toward a brushy field and ultimately toward a woodland.

The BugLady has noted previously that she believes that both the photographer and the photograph-ee should walk away from the experience unscathed. She was tempted to tilt the leaf in the spider-beetle picture, but didn’t want to interrupt the natural order of things. BugFans will have to use their imaginations.