This is National Moth Week – find a celebration near you.

July is turning out to be Beetle Month, and here’s a beauty. It’s a Rove beetle, family Staphylinidae, a beetle family that rivals the weevils (and the Ichneumonid wasps) for the title of largest animal family (and scientists are still discovering new species). It will lose its place if a proposal to divide the Staphylinidae into four families gains traction.

Anyway – the Rove beetle family is varied in size, color, diet, and habitat. In general they are mostly drab beetles with truncated elytra that nevertheless shelter a pair of flying wings folded together like a tiny work of Origami. Most are carnivores or scavengers, and most carry on their lives out of sight. Over the past 200,000 millennia, various Rove beetle species have adapted to live on tidal beaches and wetland edges, and in moist microclimates under rocks and loose bark, in fungi, manure, caves, burrows, and leaf litter, as inquilines (borders) in the nests of ants and termites, and as pest controls (eating flea and fly larvae) in the nests of some tortoises, birds, and mammals. And more. Some are dramatically chemically defended (and some of the inquiline beetles deploy “appeasement” chemicals). 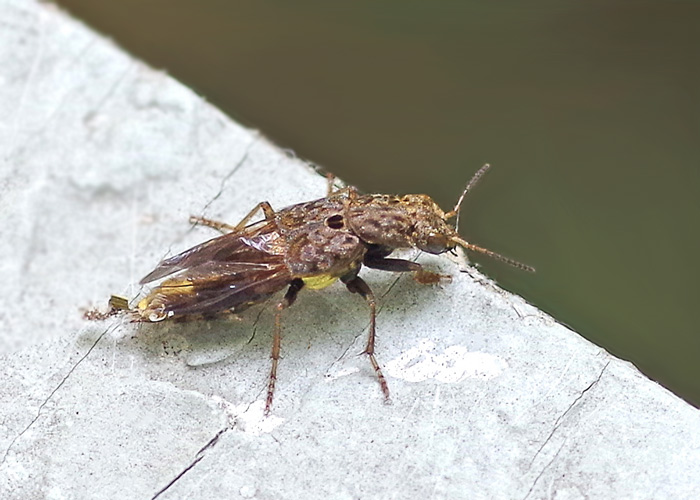 See http://entnemdept.ufl.edu/creatures/misc/beetles/rove_beetles.htm for a good general biography of Rove beetles.

Scenic Side Trip: The University of Florida article mentions that among the places that rove beetles may cohabit are “communal nests of butterflies in Central America.” (Entomological) Social butterflies? Yes – caterpillars of the Madrone/Mexican butterfly (Eucheira socialis) in the family Pieridae (Whites and Sulphurs) are gregarious. And (a little lagniappe) according to the very readable and prolific Gilbert Waldbauer in Fireflies, Honey and Silk,

The silken walls of a tent, a communal nest, constructed by one hundred or more cooperating Mexican butterfly caterpillars (Eucheira socialis) have served as a unique writing surface in both prehistoric and historic times. Eucheira is one of an extremely small number of gregarious nest-building butterflies, but there are many such gregarious species among the closely-related moths… ‘The Aztecs,’ notes Richard Peigler, ‘called [this] insect xiquipilchiuhpapalotla, which means butterfly that makes a pouch.’ He describes the walls of the tent as resembling parchment paper in texture and color and being so tightly woven and tough that they could only be cut with a sharp knife. These silken sheets were used as writing paper in Mexico at the time of the Spanish conquest.

We have visited rove beetles before in the form of the Hairy rove beetle, the rusty-tailed Platydracus and the amazing Shoreline rove beetle.

According to bugguide.net, there are at least 30 described species in the genus Ontholestes, only two of which live in North America, and only one of which is native. The name comes from the Greek onthos (“dung”) and lestes (“robber” or “pirate”). The Gold and Brown Rove Beetle (Ontholestes cingulatus) is native, and it can be found in the northwestern and eastern US and across Canada, often associated with fungi, decaying organic material, and dung piles, but it’s also found in grasslands and is considered an indicator of undisturbed forests. 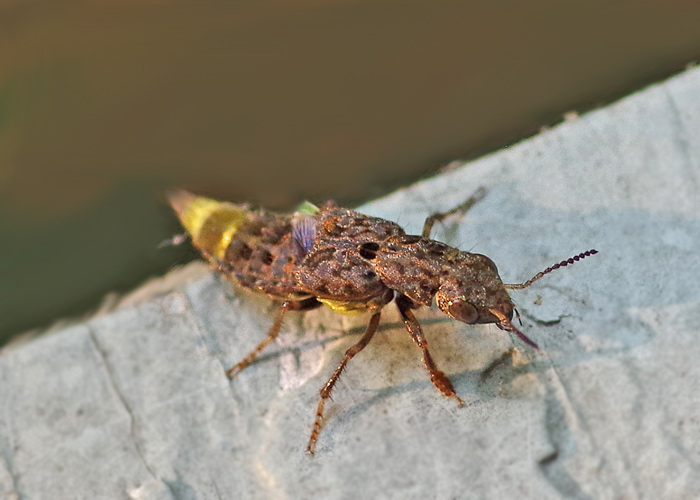 At first glance, GaBRBs might be mistaken for fireflies because of the iridescent yellow hairs (setae) on the thorax and abdomen, but it’s not bioluminescent – it doesn’t have the equipment. The “glow” depends on the angle you view it from, and one author suggests that it warns predators about the beetle’s potential for chemical warfare. Here’s a much better picture than the BugLady’s – https://bugguide.net/node/view/188718/bgimage, and the BugLady rarely sends BugFans to commercial photo sites, but these are beautiful pictures: http://www.cirrusimage.com/beetles_rove_o_cingulatus.htm. In one of the BugLady’s pictures of the GaBRB, the wings are fully extended along the abdomen, and in the other, they are almost completely concealed.

The adult is about 3/4” long, and the larva is about an inch – on the large side for Rove beetles – with impressive mandibles https://bugguide.net/node/view/199498/bgimage. When alarmed, adults run around with the tip of their abdomen raised in a threatening fashion, like a scorpion.

After mating, GaBRB males guard females as they oviposit near fungi or carrion or other decomposing organic material. Guarding takes the form of, at least, blocking a rival’s advance, but the encounter may escalate to frantic circling of the female by the two males and, at worst, to wrestling/biting. Females are relatively scarce, and interloper males will take advantage of the fact that she may still be receptive, and the fact is, the majority of the offspring are likely to be sired by the most recent male. The larvae feed on carrion or fungi, and the adults eat the inevitable flies, maggots, and larvae of other beetles that are found those habitats. The larvae pupate in chambers in whatever substrate they’re in.

(it’s happened again – Spellcheck has informed the BugLady that her 113 page working document of partially-researched upcoming BOTWs has too many misspelled words and grammar errors, the result of much cutting and pasting and lots of scientific and author names. Consequently, all spell-checking will cease until she fixes the whole document. Apparently, it’s the boss of her.)