Not long ago, an email correspondent reported seeing a giant water bug in a parking lot, so the BugLady decided to refresh a BOTW episode from 2009 with some new content and lots of cool links. 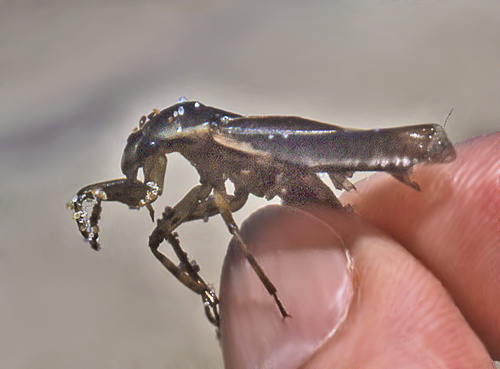 Giant Water Bugs are “true bugs” in the Order Hemiptera and the family Belostomatidae. It’s not a huge family – about 160 species worldwide, 19 of them in North America. They are large, brownish, flat, oval insects with impressive front legs (yes, there is a superficial resemblance to those other “water bugs” – the cockroaches, but they are not related). GWBs come in several size groups; the BugLady originally learned them as the “Smaller GWBs” (genus Abedus), about 1 ½”, and the “Giant GWBs” (genus Lethocerus and Benecus) which, at 2 ½+”, dwarf their smaller cousins – and many other insects.

In her venerable book The New Field Book of Freshwater Life, Elsie B. Klots reports that a hand-held GWB (more about that “hand-held” idea later) may squeak a little and may smell like apples. Another source said that they often smell fishy. 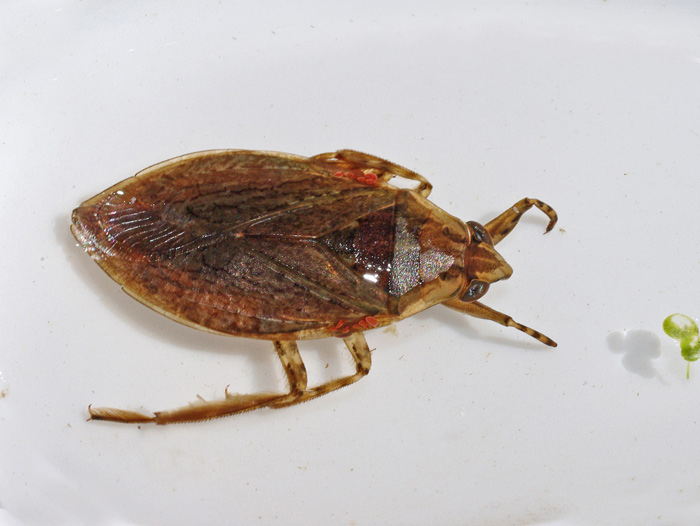 GWBs are “climber-swimmers” that live in shallow waters, both still and slowly moving, with plenty of vegetation. They hang head down on aquatic plants, close enough to the surface to reach it with the short, retractable breathing tubes that protrude from the tip of their abdomen (it’s not a stinger). They use the tubes to pull atmospheric air into their tracheal system, but additional air, for use on longer dives, is stored in a space under their wings. They use their front pair of legs to capture their prey, and the second and third pairs are adapted for swimming – flattened and fringed with hairs that effectively increase their surface area. 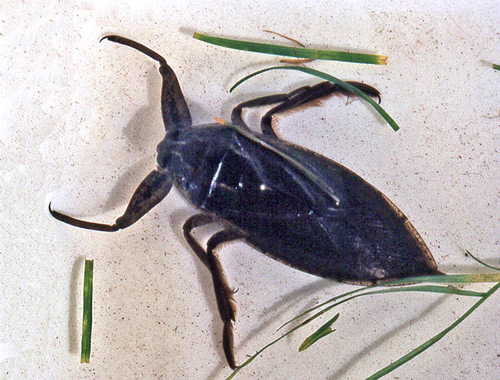 Like most other aquatic true bugs, GWBs are classified, niche-wise, as “piercer-predators,” which means that they grab their prey, stab it with a short, sharp beak, inject poisonous enzymes (produced in salivary glands near the beak) to immobilize it and liquefy its innards, and then slurp the softened tissue out. They may grab their prey as it swims past, or they may pursue it actively. The largest of the GWBs will go after an astonishing range of prey, including other aquatic insects, small frogs, tadpoles, fish, small snakes, and even little fuzzy ducklings.

Stories of their voraciousness are legend:

They also dabble in cannibalism. 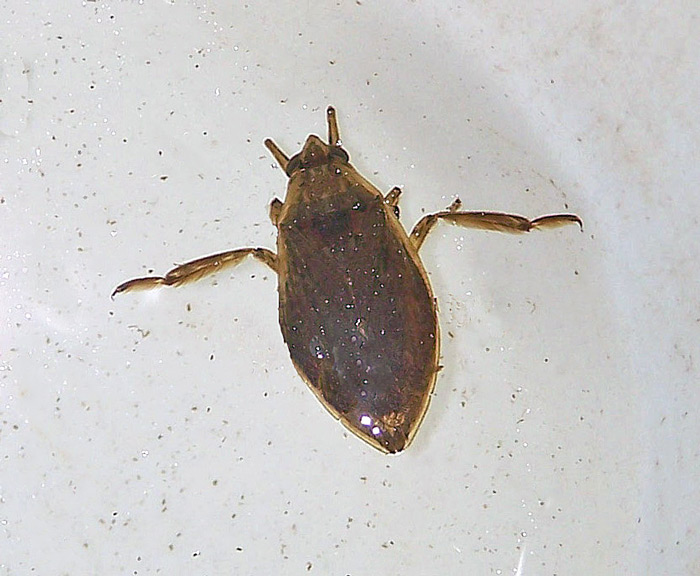 Ducks and herons eat GWBs, and the BugLady saw a program on PBS which showed people in Asia dipping them in batter and deep frying them – a batter-fried bug with six batter-fried legs hanging down (the BugLady can provide a picture if needed). Entomophagy.

“Giant GWBs” of the genus Lethocerus lay their eggs on vegetation just above the water line and then Dad sticks around to guard them (“ferociously,” says one source), climbing up the plant stem to shield them from predators and bringing water to keep them moist. A female may lay 150 eggs in her lifetime, but predation and cannibalism will account for most of them.

For males of the two genera of “Smaller GWBs,” eggs come as “carry-out” – a female will glue as many as 100 of them to his back and then cruise off to find another partner with less “baggage.” Mr. Mom spends the next week or two protecting the eggs, exposing them alternately to water and air, and stroking them with his hind legs. This stroking may be a way to keep water circulating over them, but an alternate explanation is that he is scraping them gently to clean off a fungus that is lethal to the eggs. 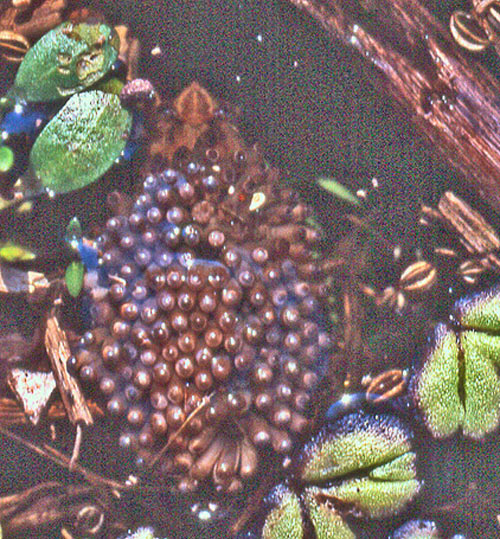 How did this behavior come about? Robert L. Smith studied the Belostomatidae and wrote about them in a chapter of The Evolution of Social Behavior in Insects and Arachnids (1997). He tells us that paternal care in insects is rare (found in only about 150 of the approximately one million species) and that most of the examples come from the family Belostomatidae. And that the practice isn’t optional – most unattended eggs die. He theorizes that as the small, ancestral GWBs grew large enough to tackle vertebrate prey and adapted to fill that niche, their eggs increased in size, too. It was hard for large aquatic eggs to absorb enough oxygen from the water, but they lacked the protection against desiccation that terrestrial insect eggs have. Ovipositing above the water surface solves the oxygen exchange problem, but adult supervision is required to moisten the eggs (and guard against predation). 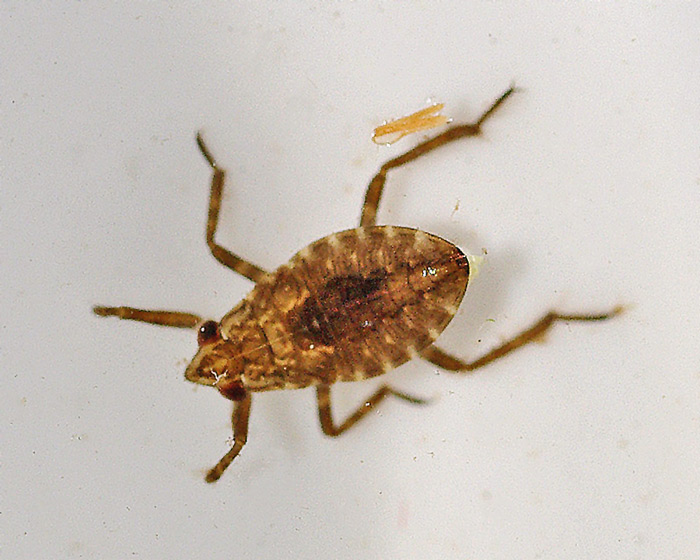 Writing in the journal Psyche in 1925, H. B. Hungerford describes how the eggs hatch,

“The hatching process is very interesting. I was fortunate enough to be watching an egg through the binocular when the cap at the cephalic end of the egg popped loose and the nymph began its emergence. The cap was forced up by a bubble confined by a delicate transparent membrane. After the cap was raised by the bubble-like device the head of the bug slowly advanced into the space delimited by the membrane of the bubble which then burst and rumpled up about the opening of the egg shell. This was not the post-natal molt, for when the bug was nearly out of the shell it was still enshrouded by a delicate garment that embraced each limb separately and was shed as the last rite in the hatching process.”

(Now watch this video of eggs hatching from YouTube) (thanks, BugFan Chris).

The nickname “Toe-biter” suggests the nature of their relationship with humans. While GWBs (generally) are not “attack-insects,” they don’t back down from a confrontation, either. If mishandled, they will stab their handler. Excruciatingly. When the BugLady explains this to kids with whom she is scooping for aquatic critters, some kid always asks if the enzyme would dissolve your thumb (like you would hang onto it that long). A naturalist friend told the BugLady that once, after she explained these facts of life to a school class she was leading, all of the kids “got it,” but one of their chaperones just couldn’t resist. An ice pack was required.

Another nickname is “Electric light bug.” These are strong, nocturnal fliers that are attracted to lights. To rescue one, adopt the “snapping turtle protocol” – pick it up by the end of the abdomen or around the middle, put it in a container, and transport it to water. Beware: they may play possum when handled and later revive to surprise their over-confident captor.

Nice pictures, as always, at the wonderful “Backyard Arthropod Project,” http://somethingscrawlinginmyhair.com/2015/03/18/predatory-water-bug-nymph-with-water-mites/, “A Field Guide to the North Side of Old Mill Hill, Atlantic Mine, MI.”

Just when you thought it was safe to go back in the water!