The BugLady can testify that Giant swallowtails rarely sit still.

The Giant Swallowtail is an impressive butterfly of the southern U.S. that that wanders quite widely in late summer. It strays into and sometimes breeds in Wisconsin. This guy/gal (the sexes are similar) is about the same size (up to about 5 ½ inches) as female tiger swallowtails. The upper surface of the wing is black with a dramatic, yellow stripe, and the underwing is yellow, which gives it a confusing appearance in flight.

When Giant Swallowtails do breed here, the food plant of the caterpillar is Prickly ash, which is the northern-most member of the citrus family. After seeing Giants throughout the county in the summer of 2007, especially in her back yard, the BugLady finally checked out the nearest patch of prickly ash, and there she found these caterpillars. The caterpillar, which is called the “Orange Dog” in the south because of its connection to the citrus family, is a big one, with two big, red horns it produces when it’s startled. 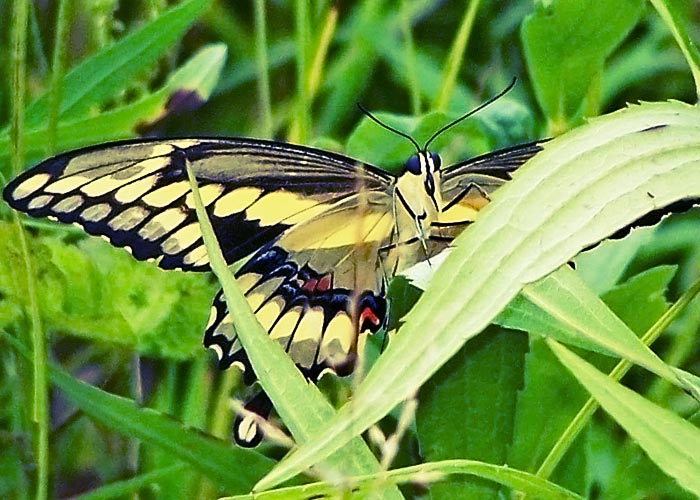 According to Butterflies of Wisconsin, the first or summer brood of Giant Swallowtails tends to be more successful than the second, which has to go through a northern winter as a pupa. The winter of ’07—’08 produced 100” of snow in the BugLady’s back yard, and she recorded 12” of rain in June. Neither was conducive to the survival of pupae, and butterfly sightings were down, both in species and in individuals. 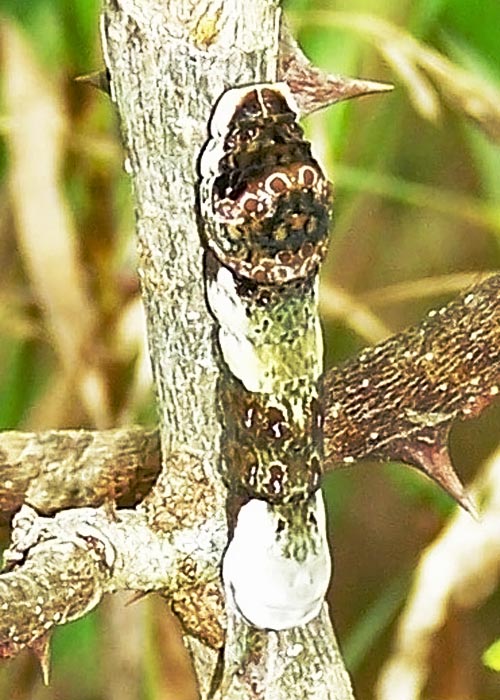 The BugLady spotted her first Giant Swallowtail of 2008 on June 5, and it looked newly minted and not like an individual that had flown here from southern Illinois. And, she did find caterpillars in the prickly ash again in the fall of 2008, and so the beat goes on.