Three years ago, the Giant Ichneumon Wasp (Megarhyssa sp.) was mentioned (as they say in Education these days) in a general BOTW about Ichneumon wasps. They are one of the BugLady’s favorite insects and are completely harmless to boot. A few days ago the BugLady found a bunch of these super-sized beauties laying eggs (they are about 5” long, including their filamentous ovipositors). There are two species pictured here—the males are the more dragonfly-looking critters. Two ingredients are necessary in order to attract GIWs. First, a dead tree. Second, a distant GIW relative, a primitive wasp called a pigeon horntail (Tremex columba). 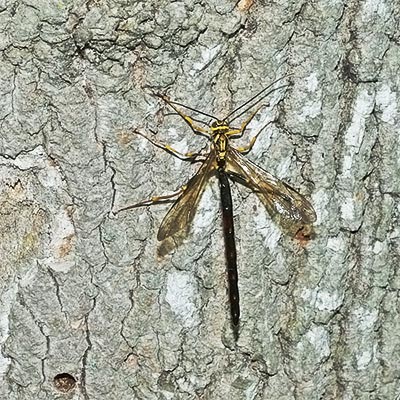 GIW larvae are parasitoids. They eat other insects, slowly, starting with non-essential structures and ending with essential organs, so that the host stays alive until the parasitoid is ready to pupate. No rotten meat for these babies! In this case, the unfortunate victim is the larva of the pigeon horntail (PH) that is developing in a chamber in the rotting wood. 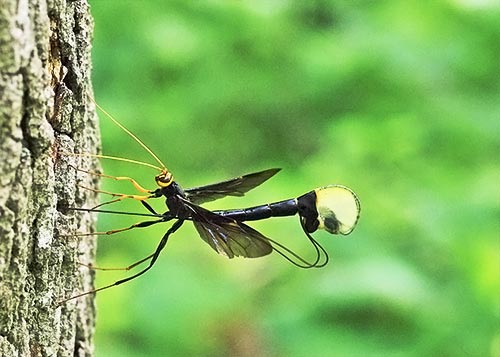 So, how do the two get together? The female GIW locates a PH larva already in the tree—the BugLady suspects that she picks up the vibrations of the PH, possibly using her antennae. Then she precision-drills into the tree (it may take 3 or 4 hours) and lays one very long, skinny egg on the PH larva, paralyzing it at the same time. When her young hatches out, dinner is served. It takes a number of weeks to finish the meal/larval stage. The GIW pupates in the only home it has ever known and chews its way out of the tree the next summer.

The BugLady is guessing that the white disc seen at the end of the abdomen is deployed to help “catch” the ovipositor and make it more rigid—it’s not present while she is laying eggs.

There’s competition for those choice PH larvae, even from related, non-drilling Ichneumons, which may lay their eggs in the GIW holes. Their young destroy the GIW eggs and then commandeer the meal.

According to one source, the concept of parasitoids inflicting a slow death was very unsettling to some 19th century naturalists and theologians. In 1860, Darwin wrote, “I cannot persuade myself that a beneficent and omnipotent God would have designedly created the Ichneumonidae with the express intention of their feeding within the living bodies of Caterpillars….”