Isn’t this an awesome insect? It’s got an inch-and-a-half long body, a three inch wingspread, and a four inch “leg-spread!” The BugLady looks forward to finding them in late summer, often on walls that they have fetched up against as the night ended, and where they will wait out the daylight.

In an early BOTW about crane flies, the BugLady treated them generically. They are, after all, a large bunch of exceedingly long-legged, “horse-faced,” somewhat similar-looking flies, many of which look like mosquitoes on steroids (but they’re harmless). Naturally, it’s more complicated than that. In this case, there’s an extra designation under Order Diptera called the “infraorder Tipulomorpha” (“crane fly shape”), and this infraorder includes five families—the classic Large crane flies (Tipulidae); Winter crane flies (Trichoceridae), of previous BOTW fame; Limoniid Crane Flies (Limonidae) the largest family numerically; Cylindrotomid Crane Flies (Cylindrotomidae), the smallest family; and the star of today’s show, a Pediciid Crane Fly in the family Pediciidae (the “hairy eyed” crane flies).

They’re all in the Order Diptera—two wings. A fly’s membranous, flying wings are attached to the enlarged, middle segment of its thorax; the final thoracic segment bears two knobs called halteres that are actually its former second set of flying wings, highly modified and used to maintain balance in flight. For a (very) thorough discussion about this fascinating adaptation.

There are an estimated 15,300 species in Tipulomorpha worldwide and possibly that many more to discover. The Giant eastern crane fly (Pedicia albivitta) (albivitta, meaning white band/stripe, for the markings on the abdomen) is one of about 150 species in its family in North America (500 globally), and is one of the largest crane fly-ish species on the continent. It’s found from Minnesota east through southern Canada and south to North Carolina. 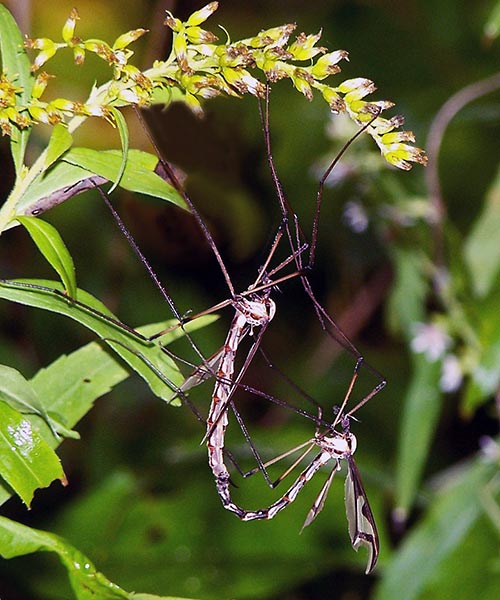 According to bugguide.net, Tipula is Latin for water spider/water fly. Crane flies, of course, because of their long (fragile), crane-like legs (they were the only type of insects, in a school insect collection the BugLady once did, that were allowed to have fewer than six legs). Hairy eyed crane flies because, although not visible to the casual observer, there are short hairs between the eye facets. Horse-faced because their longish snout (rostrum) bears a bump, called a nasus (nose), and the nasus bears the maxillary palps, which are sensory and manipulative appendages.

What do the adults eat? As The Dragonfly Woman puts it in her blog, “Crane flies, on the other hand, eat nectar or don’t eat at all. As a result, they have thicker, blunt mouthparts with all kinds of crazy looking doodads sticking off them or no mouthparts at all.” Adult GCFs are non-eaters.

Their larvae eat, though. Crane fly larvae look a bit like bloated earthworms; some are aquatic carnivores or detritivores, and others live a bit higher, but not much drier–in forest floors, in damp areas at the edges of wetlands, or in the roots of grasses and crops (where some herbivorous species are unappreciated). The GCF larva is carnivorous, feeding on small invertebrates in the muck of stream bottoms, in wet soil, cold springs, and in mosses at stream edges. Both adult and larval GCFs provide food for invertebrates and vertebrates alike. 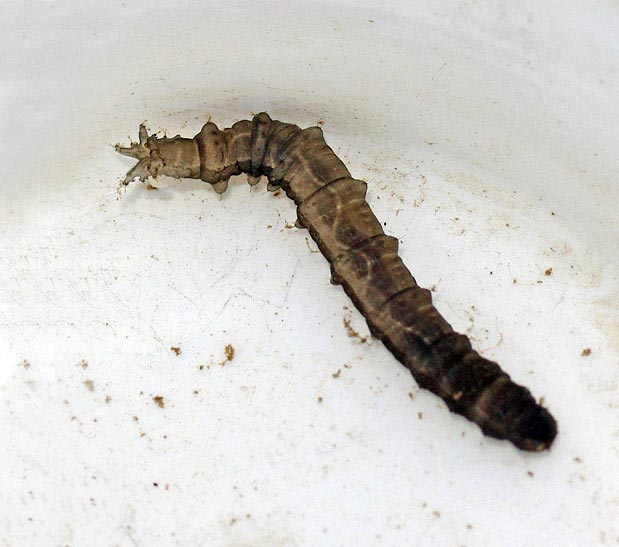 As seasoned BugFans know, the BugLady is always on the lookout for interesting sources to quote. In the course of her research, she found the GCF mentioned in a diverse collection of sources like J. G. Needham’s account in The Crane-flies of New York: Biology and Phylogeny (1920), “The larvae of P. albivitta live in cold springs and beneath saturated moss at the edge of streams. The writer has never succeeded in rearing this species to the adult condition.” The Carbon Dioxide of Soil Air (1920), and Bryophyte Ecology (2015) ([the Pediciidae] “resemble craneflies. Pedicia … (now placed in Pediciidae) is one of the craneflies found among mosses as larvae … in some streams in the Appalachian Mountains, USA (Glime 1968). Hilsenhoff (1975) reported the genus in Wisconsin, USA, where it includes mosses among its substrata.”, along with the usual suspects.

Bonus Fact: You can tell the gender of a crane fly easily, even in flight. The abdomen of males have a clasper-type tip, and the females’ abdomens are pointed (ovipositor). Males are said to have a bouncy flight, and females a no nonsense, direct flight.