Caddisflies are famous for having soft-bodied, aquatic larvae that, depending on their species and habitat, use plant materials or teeny stones to construct portable cases that may be “log-cabin,” tube, or snail shell-shaped (caddisflies that live in strong currents may spin nets instead). For “glue,” they use silk that they produce in a gland in their “lower lip.” Some people “farm” caddisfly larvae, giving them bits of semiprecious stones and metals to build with and then making jewelry from the shed cases (you can Google it).

In the early days of modern taxonomy, caddisflies (now order Trichoptera) were listed with dragonflies, stoneflies, mayflies, dobsonflies (hellgrammites), lacewings, and more, in the order Neuroptera, but caddisflies were split off 200 years ago. Their larvae look caterpillar-ish and the adults are often mistaken for moths, so it’s not surprising that caddisflies are closely related to the Lepidopterans.

The Giant casemakers belong to the caddisfly family Phryganeidae, and they’re found through much of the U.S., into Canada. Adults are about ¾” long (large, for a caddisfly) and dark/dull-colored, and they don’t stray far from the wetlands required by their also-large, stripy-headed offspring. Phryganied larvae live in cold water, both still and gently flowing, and they construct their cases by sticking vegetation together longitudinally or in a spiral (you can find left or right-handed spirals within the same species), sometimes incorporating tiny pebbles. Look for them in grasses that hang into the water, on submerged leaves, and on underwater plants and roots. When they’re disturbed, or when they’re defending their case from roving pryganeids that have misplaced their own case, larvae can crawl into and out of their cases far more easily than can other caddisflies (and from either end!). Do watch the video clip from troutnut.com (they remind the BugLady of otters).

The BugLady encounters this impressive, chunky caddisfly infrequently. Oligostomis ocelligera is a northeastern species that’s uncommon in Wisconsin, and there are only a few records from Minnesota. To see its distribution in Wisconsin, go to A Distributional Atlas of Riffle Insects from Wisconsin Streams page 241. Sources list the emergence of adults in New York and Wisconsin for the last two weeks of May, but the BugLady photographed these in the first week of May in 2009 and 2016. They are said to have a long flight period. 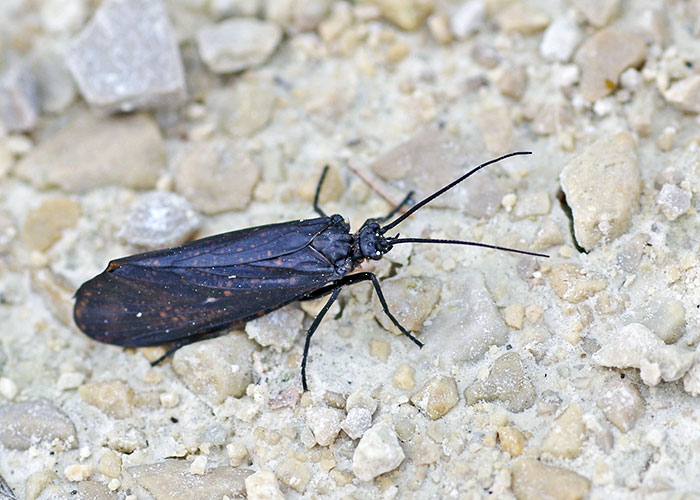 Oligostomis ocelligera favors marshes, ditches, and lakes, but it also inhabits very slow streams. The larvae hunt and hide in submerged vegetation or in detritus on the floor of the marsh/pool/ditch/etc., but they’re also found under moist beds of moss, and the BugLady found a report of five larvae being found in a pitcher plant. The larvae are “shredders,” attacking large pieces of fresh or decaying vegetation and making little pieces out of big ones (thus providing food for smaller vegetarians and nudging the plant material toward decomposition); and they are “engulfer-predators” that eat tiny invertebrates whole, or bite off chunks. There’s some indication that the larvae are more inclined to vegetarianism in their early instars, becoming more carnivorous as they near pupation.

The Phryganeidae are scantily-studied, but the species that have been scrutinized deposit their eggs under water; in order to do so, a female must crawl below the water’s surface, cloaked in a film of air. Another report says that she may “run across the water to deposit her eggs.” The eggs are encased in a gelatinous sheath that expands as it absorbs water (except, a species that uses ephemeral ponds hangs its mass of jelly above the receding water to dry out and be reconstituted when the pool is). Eggs hatch in mid-summer, and the larvae house themselves by cutting clunks of leaves into strips, forming them into rings, and fastening them end-to-end. 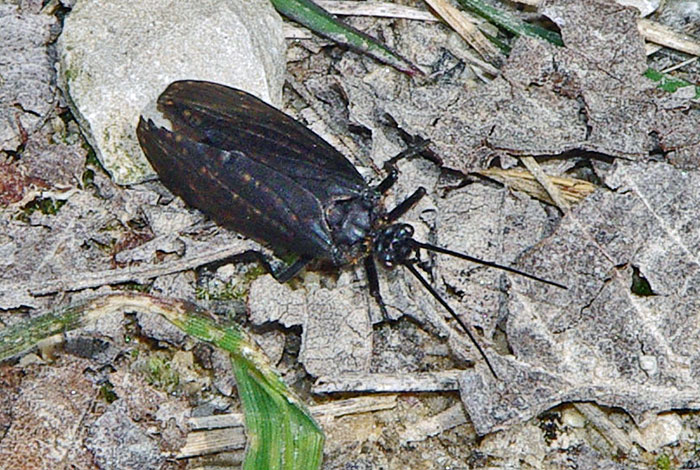 When they’re ready to pupate late in the following spring, they burrow into waterlogged wood or other soft substrate and they modify their larval case. The pupae of some phryganeid species have mandibles, but Oligostomis ocelligera doesn’t, so when they pupate, they plug the front end of the case with bits of debris glued with silk, creating a barrier that they will be able to push through as an adult (species that retain their mandibles can chew through the front door). One source said that pupae climb up on land before emerging.

The larvae are considered to be moderately tolerant of pollution on biotic index lists, but the BugLady came across a paper documenting O. ocelligera larvae thriving in streams in Pennsylvania that discharged from acidic mine drainage and had, along with high levels of sulfates and heavy metals, a pH of 2.5 to 3.2 (vinegar) (black coffee has a pH of 5, and 7 is neutral).

Adults in the genus are daytime flyers with colorful, patterned wings that contribute to their moth-y appearance. Says researcher Glenn Wiggins, “In an evolutionary context, these are the butterflies of the Trichoptera” (in both color and behavior, females are more cryptic than males). Scientists speculate about whether the “bright” patterns might be aposematic (warning) coloration. Wiggins, in The Caddisfly family Phryganeidae (Trichoptera), tells us that

Aposematic coloration could be related to a distinct odor emitted by male and female phryganeids when disturbed. The source of this odor seems to be drops of a viscous fluid emitted from the anal opening. It is possible that the odor could deter predators such as birds, or the fluid could provoke an avoidance reaction if tasted. Wiggins describes the odor of one genus as “burnt marshmallows” and another as “reminiscent of old cheese;” he admits that he has handled too few Oligostomis to generalize but concludes that “if the bright, contrasting colour patterns of the wings is part of a warning system directed at predators of day-flying species, offensive secretions could be involved.

A few family members use Plan B—irritating/urticating hairs on the thorax and base of the wings.