As the leaves color and fall, some interesting galls are being revealed. Quick review – a gall is an abnormal and localized tissue growth on a plant (or animal – according to Wikipedia, “In human pathology, a gall is a raised sore on the skin, usually caused by chafing or rubbing”). Plant galls can be caused by friction, fungi, bacteria, and even by viruses, but for BOTW purposes, we’ll stick to galls that are initiated by animals like insects and mites. Cecidium (the plural is cecidia) is listed as a synonym for “gall.”

Tiny Cynipid wasps and some groups of midges and moths are the main gall makers. The general modus operandi for gall formation is that the gall maker does something (like secreting a chemical) that tricks the host plant into growing extra tissue at that location. Abracadabra – the herbivorous larva is enclosed in a climate-controlled, edible shelter (all it needs to do is make sure that it can get out). Many gall makers are able to defuse their host plant’s natural “grazer-control” mechanisms, possibly by hogging the plant’s resources.

There’s nothing random about it – gall-making insects/mites make distinctly-shaped galls on specific parts of their particular host plants, and part of the host’s scientific name is often incorporated into the gall maker’s. Galls are not limited to woody plants, and they can occur on any part of a plant, including the roots. Oaks entertain more than their fair share of galls.

Galls have been used in tanning leather (many galls, not just those that grow on oaks, are tannin-rich), for prophesy, as inks and dyes, medicines and spices, and as foods for livestock and humans (one source said that galls taste like the plant they grow on).

The BugLady never cuts galls open – it would be violating her Prime Directive (she once gave a class of 5th graders the choice – open a gall and see, but doom, the inhabitant, or not. They left it intact). But, thank goodness there are people who do open them so we can see what’s happening in there! 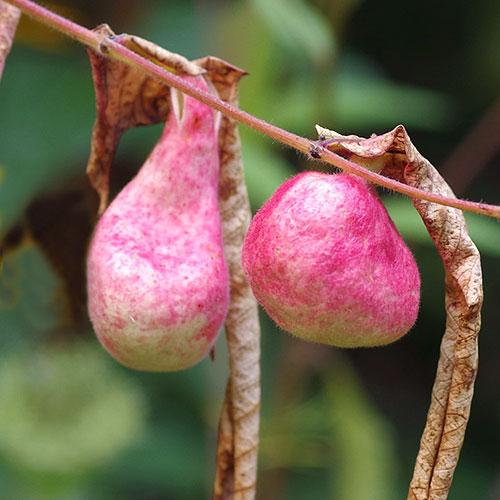 The gall maker is Melaphis rhois, the Staghorn sumac aphid (the genus of sumac is Rhus). As a group, aphids are not into gall making; this one is in the wooly aphid subfamily (Eriosomatinae), in the family Aphididae, and it’s the only species in its genus. Like many galls, it may look funny, but it doesn’t hurt the plant, though a heavy infestation may cause the sumac’s leaves to turn color and fall a bit early.

The BugLady was happily researching and cutting and pasting information about Sumac leaf galls when she came across this article by BugFan Bob at the Missouri Master Naturalist Springfield Plateau Chapter’s site. Be sure to watch the video, and then mosey around their site for other good stuff. 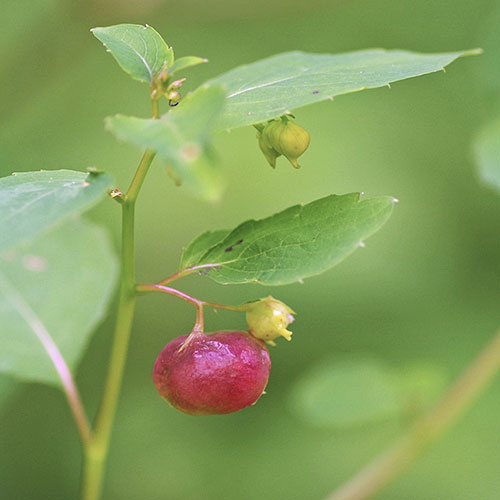 This one is caused by a gall midge named Schizomyia impatientis in the fly family Cecidomyiidae (jewelweed is in the genus Impatiens). Mom lays her eggs on the flower bud, and a gall forms there instead of the normal fruit. This gall also contains more than one gall maker. The midge larvae exit the gall in fall – by some accounts overwintering as larvae and by others as adults. Here’s a basic Wikipedia article about gall midges. 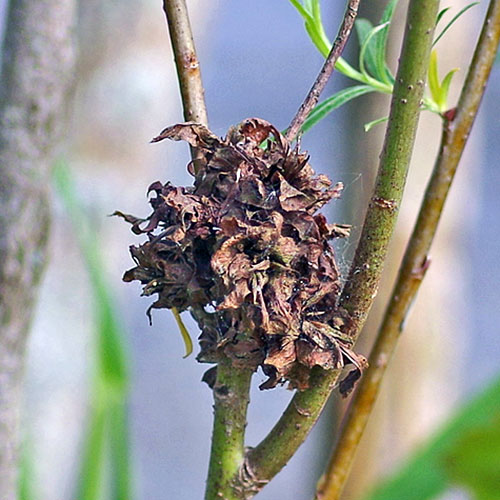 Instigated by a gall midge named Rabdophaga salicisbrassicoides (unless it’s Rabdophaga saliciscoryloides), also in the family Cecidomyiidae (willows are in the genus Salix). There are 105 species in the genus worldwide, and many of them do their work on willows. The gall occurs on a developing leaf bud, and it seems to stimulate the growth of a multitude of squished-together leaves.

Mutualism refers to an ecological relationship in which the acts of organisms of different species benefit each other – a win-win (pollination is the classic example). When researchers Savage and Peterson studied some of the relationships surrounding the willow rosette gall, they found that ants often “farm” (tend to) aphids on willow branches that have galls, and they hypothesized that the presence of ants, aphids and galls in close proximity might somehow benefit all three. They also wondered whether the actions of ants and aphids might somehow protect the gall makers from parasitism. They found that aphids often feed on the gall tissue, causing aphid populations to increase, and that when there are more aphids, there are more galls, but the presence of ants and aphids did not affect the rates of parasitism.

The BugLady recommends that BugFans take a brief detour into the wonderful world of plant volatiles – chemicals given off by plants in order to attract pollinators, to attract predators to feed on bothersome herbivores, and to signal to surrounding plants that they are under attack. Volatiles also help insects identify the right host plants to lay their eggs on (unfortunately, there’s no Cliff’s Notes version, you mostly jump right into the deep end of biochemistry, but try this article from rodalesrganiclife.org). Turns out that chemicals given off by the willow leaves lure both the pollinators and the gall makers. 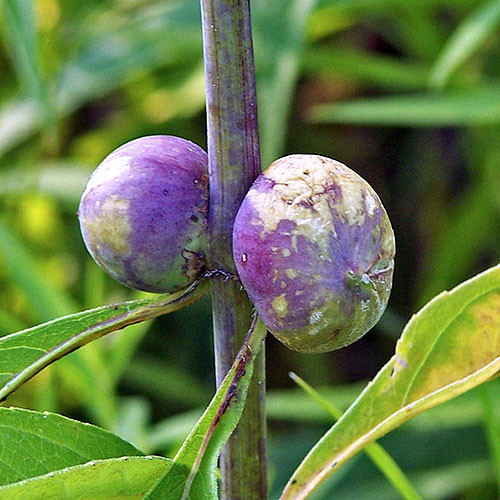 Another gall midge – Asphondylia helianthiglobulus, family Cecidomyydae (wild sunflowers are in the genus Helianthus). Here are some adults emerging from a gall (the BugLady had a moment when she tried to figure out why the galls in bugguide.net pictures were fuzzy and the ones she has photographed are smooth, but she’s figured it out).

(a.k.a. Robin’s Pincushion and Rose Bedequar (from an Arabic word for “wind-brought”) gall) 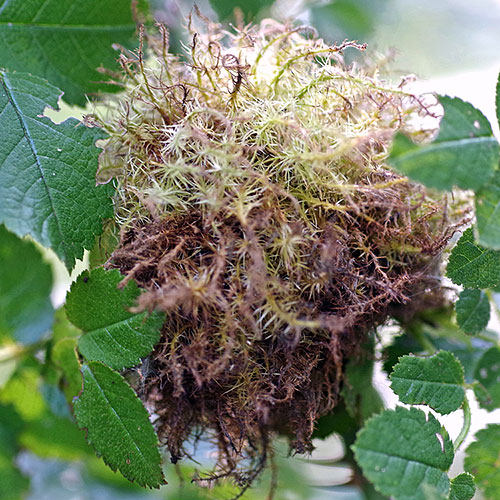 The gall maker is Diplolepis rosae, a 0.2” long, non-native wasp in the family Cynipidae, which lays as many as 60 eggs in a lateral or a terminal leaf bud. Reproduction is parthenogenic, and the wasps that emerge in spring are 99+% female (probably because of an endemic virus called Wolbachia) (worth another Google detour – female wasps treated with antibiotics produce normal ratios of both male and female eggs). Along with the usual edible, interior tissue that the wasp larvae feed on, the plant also grows sticky, fibrous “tentacles” on the exterior.

Birds and small mammals may excavate the ping-pong-ball-sized galls for the larvae or pupae nesting inside (click on the pictures for a slide show), and quite a line-up of insects may co-habit the gall harmlessly or with evil intent. The survival rate is higher in galls that are larger and are located on lower branches, and the galls are said to be more common when the rose plant is stressed.

According to Margaret Fagan in “The Uses of Insect Galls”, Pliny the Elder (the first-century AD Roman naturalist, not the craft beer) believed that the mossy rose gall was “among the most successful applications for the restorations of hair,” and it has enjoyed a number of other medicinal uses.

Here are links to the previous BOTWs on galls:

On a totally unrelated topic, the BugLady came across this account by serendipity while she was looking for something else – The Michigan Nature Guy’s Blog – Wool Carder Bees.