About six years ago, the BugLady posted three episodes about galls. What are galls? Technically speaking, a gall is an abnormal growth or swelling of external tissues. In animals, “gall” may refer to a sore or callus caused by chafing, and the same definition applies to the thickened “scar tissue” that occurs where two tree limbs rub against each other. “Gall” (alternately, “canker”) also refers to a plant tissue growth triggered by bacteria or fungi. The “bug-centric” among us, however, think of galls in narrower terms—they are the variously-shaped growths instigated by arthropods on plant tissue (the name “gall” refers to the bitter taste of some tannin-rich galls).

Here’s the general formula for gall formation: Mom lays/injects her egg(s) onto/into plant tissue, and when the eggs hatch, the young insects (there are gall-making wasps, flies, beetles, moths, thrips, and aphids) or mites burrows inside, if it’s not there already. There are several ideas about what happens next. One is that the critter releases a chemical that is similar to the plant’s growth hormones, which causes the plant to produce extra tissue where the larva/nymph is. Alternately, Mom deposits the chemical inside when she oviposits. Or, the trigger might be mechanical irritation of the plant tissue, or there may be a viral component. In any case, dinner is served—the gall insect feeds on the inside of the gall. According to Lawlor (Discovering Nature Close to Home), a developing larva/nymph can secrete an enzyme that converts plant starch into energy-rich sugars that feed the plant as well as the gall-maker and that continue to stimulate the growth of the gall. One author calls them “cell pirates.” Bottom line—the nymph/larva is contained in one spot but has a supply of food in a climate-controlled compartment. Win-Win.

But, there are drawbacks. It’s pretty tight in there, so larvae/mites tend to be small with greatly reduced legs and antennae, (adults are seriously tiny, too—the galls are far more conspicuous than their makers. Despite the clever disguise, gall-makers are found by parasitoids and predators (birds and chipmunks love them) and by intruders—some benign (a group of tiny animals generically known as inquilines, from the Latin inquilinus for lodger, that simply co-habit), and some not (mites or parasitoids or beetles that lay eggs inside the gall and/or eat the gall-maker). Though they might look unsightly, galls generally do not harm their host plants, except in big outbreaks (gall insects, sensibly, do not kill the hand that feeds them).

Neither the start nor the end result of the process is random. Specific gall-makers target specific host plants, resulting in galls that are predictable in location and appearance. And like many other insects that are linked with particular plants, these gall-makers are often named for their hosts.

About 2,000 different galls are found on North American plants; of these, oaks entertain 800 kinds. There are about 800 species of tiny gall wasps in the family Cynipidae in North America (2,500 worldwide). In old publications, gall wasps are called gall flies, but they aren’t. Around 70% of Cynipid wasps make galls on oaks, and some others are inquilines of gall-making wasps. Cynipid wasps have several generations per year, reproducing with or without input from males, depending on the life stage (cyclical parthenogenesis), and producing different galls in each stage. For a really nice paper on Cynipids, see The Population Biology of Oak Gall Wasps (H
ymenoptera: Cynipidae).

Two closely-related species of Cynipid wasps are called Hedgehog Gall Wasps and are responsible for Oak Hedgehog Galls. Acraspis erinacei is found on white oak (Quercus alba) http://www.pbase.com/tmurray74/image/120584998 and Acraspis villosa targets bur oak (Quercus macrocarpa). In either case, the fuzzy gall, located on the leaf’s mid-rib, contains three to five egg chambers, and the wasps that emerge from this gall are females. These lay eggs on oak leaf buds, and these eggs overwinter there; the larvae that emerge in spring form flat, blister-like galls on the leaf scales. Adults that emerge from the leaf scale galls are male and female, and it is their offspring that make the hedgehog galls with their all-female passengers.

The creator of the Oak Spangle Gall led the BugLady around in so many circles it made her dizzy. She read that a cynipid called Phylloteras poculum causes it, and that’s about all she could find out until she looked it up under its former name, Xystoteras poculum.  Success.

About Xystoteras poculum, the Proceedings of the United States National Museum, Volume 60 (1922) tells us that “Popularly known as ‘spangle galls’ and first described by Fitch in 1859, these common objects have an extended literature under the name Cecidomyia poculum…but they have not hitherto been raised. Osten-Sacken [their namer] suspected that they were due to a Cynipid. The galls are attached in groups on the underside of mature leaves, and they are found in September and October. They are button-shaped, 3–4.5mm in diameter, covered with a whitish bloom, slightly concave above, with a low elevation in the center, the edge sharp and becoming less upturned as the larval cavity develops….”  White oaks (Quercus alba) are the hosts.

Instead of quitting while she was ahead, the BugLady decided to take one more step back and try the original scientific name, Cecidomyia poculum (she wishes she hadn’t), and that’s when things got murky. Why? Because despite the fact that (according to bugguide.net) the Cynipid <a http://bugguide.net/node/view/578800Phylloteras poculum used to be called Xystoteras poculum, and, before that, was named Cecidomyia poculum, and the genus Cecidomyia belongs to gall making midges—in the fly order, Diptera—not wasps.

And here’s a couplet in the gall key in Felt’s (wonderful) 1940 Plant Galls and Gall Makers (pdf):

* Saucer-like, small galls, in numbers on underside of the leaves, in fall, covered with a whitish bloom, on white, ? burr and ? post oaks, summer, gall wasp Oak spangles, Xystoteras poculum Weld.
* Similar galls on oak, gall midge…Cecidomyia poculum. This site calls it a midge http://www.bio.brandeis.edu/fieldbio/Plant_Galls/cecidomyia_poculum.html. Says Felt, “There is a disk-like flattened gall, approaching in shape and size the more common and better known “spangle galls” of the Ocik, some of which may be produced by a gall midge.” In fact, there are a bunch of Cynipids and gall midges with different genus names that share species names.

It was all downhill from there. The BugLady found this lovely volcano-shaped gall on hickory in early July. Felt says that “Most of the leaf galls on hickories are produced by plant lice or gall aphids and gall midges.” This might be the Hickory Midge Fly Gall caused (maybe) by a gall midge called Caryomyia marginata (unless it’s Caryomyia sanguinolenta, the Hickory smooth gumdrop gall, but their very similar galls are built on the lower surface of the leaf). 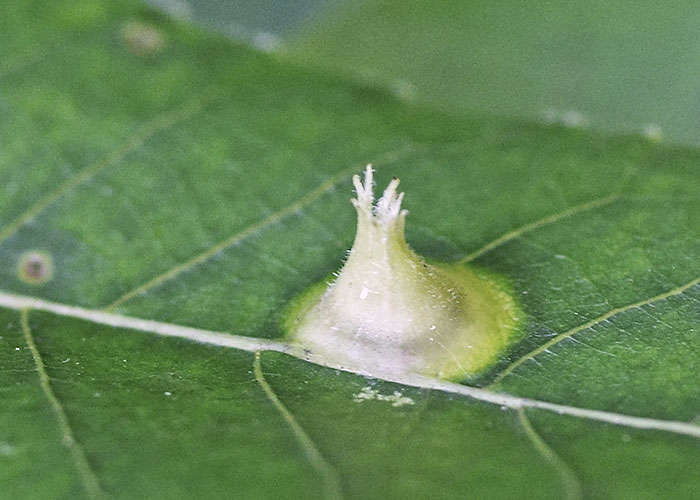 The BugLady appreciates scientists who have fun naming things—in this genus we find the Hickory puff tart, the Onion, the Pumpkin, the Popover, the Purple gumdrop, the Bumpy woody, the Ginger jar, the Sombrero, the Bullet, the Placenta, and the Schmoo gall midges.

Or—think tiny, two-legged, gall-making Eriophyid mites, so small that they disperse by wind. They make a variety of cone-shaped galls, too (the BugLady loves Scanning Electron Microscope (SEM) images) UGA1318030.

Sometimes it’s not easy being the BugLady.

Nifty gall factoid: one of the foremost students of galls was Alfred Kinsey, who went on to an equally interesting area of study.
Nifty Cynipid factoid: some oak Cynipid galls protect themselves by secreting nectar that attracts ants who take down other insects that might be thinking of feeding on the galls or their makers or of loitering there.

Want to know more about galls? Check Nature in Winter by Donald Stokes, Discovering Nature Close to Home, by Elizabeth Lawlor, and Insect Life and Natural History (an oldie) by S.W. Frost.

Kudos to BugFan Homer and his crew (the BugLady always has to check the spelling on that, so she’s not bestowing antelopes (Kudus), who are in the process of the changing BOTW archive at the UWM Field Station website to a different, more searchable, format. If you use the archives and like what you see, that’s Homer’s doing.