Galls II – A Date with History

The BugLady loves it when the research she is doing makes a sharp turn toward History.

Galls are mentioned by (very) early observers like the philosopher Theophrastus (371 to 287 B.C.) whose two botany books, Enquiry into Plants and On the Causes of Plants, influenced scientific thinking for the next 1,500 years. People have been pondering the mysteries of galls for a long time, although not all of the hypotheses have been righteous ones. For example, because they were considered “supernatural growths,” galls were used to foretell the future. In the Middle Ages, their contents were examined (much tidier than chicken entrails). Spiders signaled pestilence; maggots meant either famine or a plague among cattle; flies—war; and ants—a bountiful harvest. In 1686 Malphigi suggested that galls were swellings that plants (like people) developed due to being stung by insects (but he straightened out and went on to discover capillaries and to have the Malphigian tube named after him).

Last week’s BOTW, Galls 101, provided an introduction to the biology of galls and gall-makers. Short version: “Better living through chemistry.” This week’s BOTW features a few oak galls and a grape gall. Remember, of the 2,000-plus kinds of galls found on North American plants, 800 different kinds form on oaks (genus Quercus).

Cynipid wasps, which mainly target stems and leaves, are very big players in the oak gall game. The galls caused by some Cynipid wasps are very high in tannin/gallotannin (giving them the bitter taste that gave rise to their name, gall). Tannic acid is produced routinely by many plants (the plant’s strategy is to make itself unpalatable to grazers), but galls contain the highest tannin concentrations on most plants. It has been suggested that the gall-makers enjoy some “tannin-perks;” since tannins are somewhat anti-microbial, high-tannin galls may protect the larva against fungi and bacteria.

Interesting as they are to Nature Appreciators and to Scientists (they are, after all, “tumors” and their dynamic in that area is being studied), galls have a history of human commerce and use that goes back thousands of years. They have provided food, medicine, lamp fuel (in Greece, from a gall caused by a wasp named Cynips theophrastea), chemicals for tanning hides, dyes for fabric, leather and hair, beads for necklaces, and inks for tattooing and writing.

Aleppo galls (produced by Cynips gallae-tinctoriae on certain Turkish/Eastern Bloc oaks) have the highest concentrations of tannin among the galls, 50—65%. Historically, Aleppo galls provided a strong astringent and a treatment for fevers, burns, mouth ulcers and toothache. They continue to be important trade item, now used more for tanning and dyeing and as an ingredient in inks.

The presence of traces of iron-gall ink in the Dead Sea Scrolls makes for a pretty impressive pedigree. S.W. Frost, in Insect Life and Natural History, wrote in 1942 that “in some places, the law requires that permanent records be made with ink derived from gallnuts…. The Aleppo gall has been specified in formulas for inks used by the U.S. Treasury, Bank of England, German Chancellery, and the Danish Government.” The downside of iron-gall ink is the fact that it tends to fade after, oh, 1,500 years or so, and by that time, it may have discolored your paper, too. Google “oak gall ink” or “iron-gall ink” for the recipe; you can join the artists who explore older media—and the forgers of old documents—in reviving this ancient ink.

There are about 100 kinds of these marble-to-ping-pong-sized galls; they grow on a leaf’s mid-vein or on the leaf stem (petiole). Some kinds have thin outer shells and others are denser. The oak apple pictured is occupied by a single larva. In fall, when you find these on the ground among the fallen oak leaves, check to see if there is a tiny exit hole and think about the size of the full-grown wasp that made it. Stokes, in Nature in Winter (great section on galls), tells of opening an oak apple gall that held about 200 ant eggs along with their nursery workers, and he has also found nests of mud wasps inside.

Because they form from the woody tissue of the twig, these half-inch galls are very firm and can stay on a tree for several years. There are about 50 kinds of oak bullet galls, and some secrete a sticky “honeydew” that attracts other Hymenopterans—ants, bees and wasps. One source said that in exchange for the honeydew, the honeydew-eaters discourage parasitic wasps from laying their eggs in the galls. But, another source mentions attacks on bullet galls by parasitic wasps that insert their ovipositers into the gall and lay their egg on the gall-maker’s larva. Birds may peck open the gall and go after the larva. 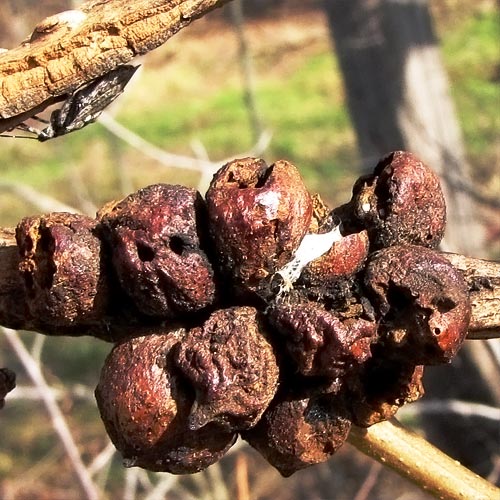 These attach to the mid-vein (usually) or side-veins (sometimes). They grow on the underside of the leaf, and they are easier to see as the leaves fall. Based on this one sample, it looks like they may have a “vampire-like” effect on some surrounding tissue. 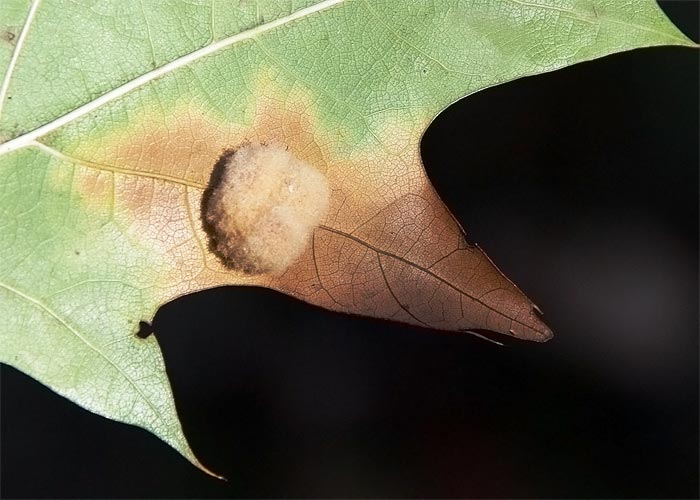 In 1850, there was only one species of grape being grown in all the vineyards of Europe. In about 1860, the Grape Phylloxera (a wingless aphid about 1/20″ long) was accidentally introduced from its native North America. The rest, as they say, is history. By 1880, the little critter had traveled to Australia, Algeria, South Africa, and via a different route, California. One-third of French wine-producing grapes, about 2 ½ million acres, were wiped out (Mother Nature usually finds a way to deal with monocultures).

While leaf galls seldom damage a plant, a plant with grape phylloxera leaf galls has root galls, too, and the root galls weaken and stunt the vine. The French fought back, and after burying live toads under the vines to draw out the poison failed to work (True!), they imported the rootstocks of resistant American Fox grapes both to graft the French vines onto and to develop hybrids from—all the while “dissing” the quality of the American grapes. Each of the leaf galls may house a teeny, yellow Aphid Mom and hundreds of eggs and/or nymphs. 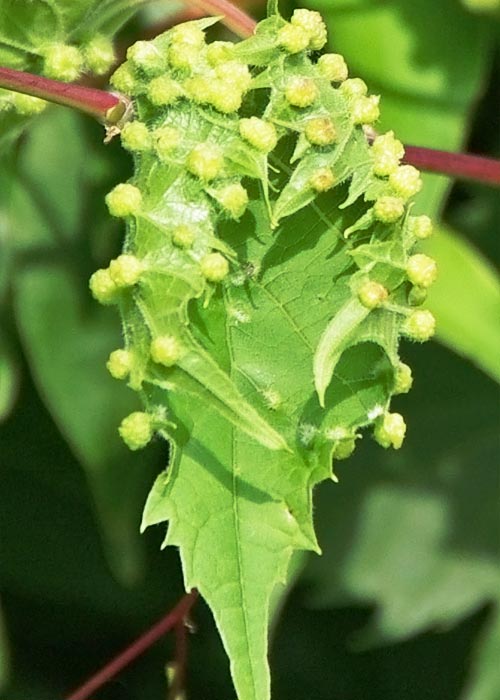 And by the way, it really bugs/galls the BugLady that much of the information about these generally harmless growths is found on sites that have a pest control and forestry-pest bias. The accounts invariably end with some variation of “These are harmless and don’t measurably damage the plant, but you don’t like the looks of them, so here are some chemicals you could throw at them.”

This concludes Galls I—How They Do That, and Galls II—A Date with History. Coming eventually, Galls III—Oddball Galls.