The portrait of fungus gnats is a large canvas that is often painted with exceedingly broad brushstrokes. The problem is that within the superfamily Sciaroidea (gall midges and fungus gnats), there are five families of small/tiny flies that are grouped under the name “fungus gnat.”  While their appearances and lifestyles are similar-ish, it’s tricky to make generalizations like “All fungus gnats do…, eat…, look like…, etc.”  And, of course, the term “gnat” conjures images of a certain bunch of annoying, mosquitoey, biting flies, to which fungus gnats are not related, other than being in the fly order, Diptera. They are weak flyers and good walkers, and they don’t bite.

Fungus gnats are so-named because the offspring in some (but not all) of the families feast on fungi. Some groups are pests in gardens, agriculture, nurseries, and (overly wet) flowerpots, which generates bad PR for the whole group (one source referred to fungus gnats as being pests on “interior plantscapes,” which is what the BugLady is now calling her collection of much-abused geraniums). Other names for them include fungus midge, manure fly, mushroom fly, and drain fly (which is also a name for moth flies).

In his entry on fungus gnats for the Springer Encyclopedia of Entomology, Peter H. Kerr says that “most of their natural history secrets remain untold. They occur on all continents except Antarctica. The adults often attain large populations and play an important role in the food web of forest environments.”

Here are two fungus gnats, each from a different family, and both on the BugLady’s “Porch bugs” list:

The leggy fungus gnat with the amazing antennae is in the family Cecidomyiidae (the gall midges/wood midges/gall gnats), and the BugLady suspects that it’s in the genus Claspettomyia. This fly languished, unidentified, in the “X Files” for a while, with the uneasy title of “crane fly” (though the BugLady noted that it doesn’t have the usual “horse face” of a crane fly). Family members have hairy wings, long antennae, and reduced mouthparts. This is probably a male; they have longer antennae than females. 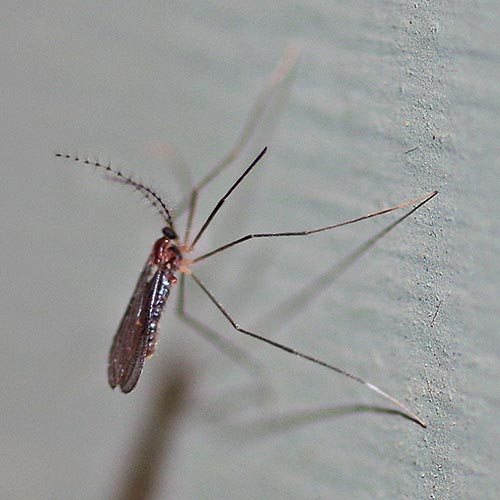 Do Cecidomyiid fungus gnat larvae eat fungi? A few do, but most are gall-makers that feed on plant tissue within galls (abnormal tissue growths) that they cause a plant to grow around them (there are several BOTWs for that; check the archives). One family member is a serious wheat pest called the Hessian fly, which makes galls on wheat; several others target rice, coffee flowers, soybeans, black locust trees, and alfalfa; and one causes a rosette gall on goldenrod. The larvae of still other species are carnivores that feed on crop pests like aphids and scales, and while their relatives may be unwelcome in greenhouses, they are used to control greenhouse nuisances.

Really odd fungus gnat fact: Some Cecidomyiidae reproduce via a peculiar—and rare—process called paedogenesis, in which a gnat is able to reproduce asexually during its larval or its pupal stage, before it is mature. In Functional Biology of Clonal Animals, author Roger Neville Hughes tells us that “The larvae of certain cecidomyiids could develop gonads precociously (paedogenesis) and via parthenogenesis (virgin birth) and brooding, give birth to daughter-larvae [which sometimes consume their mother]. …giving rise to large clones of maggots. …certain tribes of cecidomyiids consist entirely of clonal species…” Why did Mother Nature dream this one up?; Supposedly, to cover all the bases for species that are reproductively challenged by adults that have low fertility. Like aphids, multiple generations produced parthenogenetically are followed by a generation with fertile males and females.

The orange fungus fly is in the family Mycetophilidae and (most likely) in the genus Mycetophila. These are the guys who put the “fungus” in Fungus gnats!

They are small (mostly around ¼”) and hump-backed, and they have thick antennae and long, spurred legs. 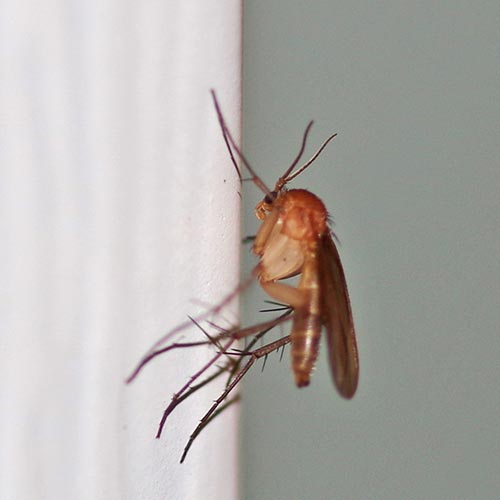 Besides the BugLady’s front porch, adults are found in the damp woods and grasslands where their larvae’s host fungi grow. The BugLady read an interesting study that discussed whether fungus gnats target specific kinds of fungi or are indiscriminate feeders. The conclusion was “maybe.” Some fungus gnats are probably tied to a particular mushroom species/genus, but more study is needed. The gnats seem more interested in the texture of the sporophores (fruiting bodies) that they feed on and in the mushroom’s phenology. Fly larvae development is notoriously fast, and the sporophore must stay intact long enough to encompass it. Over time, the length of some species’ larval stage has adjusted to the length of the fungus’s fruiting stage.

Odor is important, too—that nice mushroomy smell attracts both males and females (Jack-in-the-pulpit flowers also produce a mushroom odor, which allows them to borrow some fungus gnats for pollination). A female lays her eggs on fungi—she may lay as many as 1,000 eggs during her lifetime. The span from egg to adult is about three weeks, but adults only live for about a week. There are many, overlapping generations.

Some fungus fly larvae burrow into the mushroom and others make sticky webs on the underside of the cap (http://bugguide.net/node/view/241448/bgimage). As mushroom enthusiasts know, black-headed Mycetophila larvae often feed within the caps of Russula, Boletus, and Agaricus fungi or on fungal hyphae (the main, thread-like body of the fungus). A few species have partly-predaceous larvae.

Adults may nectar on flowers and are considered pollinators. Because they hang out on fungi, they inadvertently pick up fungal spores and transport them, planting new mushrooms. Fungus gnats can occur in large numbers and are an important food source for bats, spiders, amphibians, dragonflies, and beetles.

Mysterious fungus gnat fact: Among the 150,000+ species in the order Diptera, only a dozen or so species of Mycetophilid fungus gnats have developed bioluminescence. They hide behind sticky, sometimes poisonous webs on the underside of a mushroom cap and make light. Why? To attract light-seeking prey? To advertise their web so other arthropods can avoid it?

Advice from BugFan Becca, who once researched “fungus gnats” because of a gnat population in her home. In the fungus gnat information world, “Grower’s Forums” are actually “Pot-growers’ forums.” Google knows you’re looking.

Research for this episode took the BugLady to one of her favorite websites, dedicated to the Study of Northern Virginia Ecology and hosted by the Island Creek Elementary School (Fairfax County Public Schools). The site’s motto is “This site is Always under Construction.” Nice pictures, good information, and the BugLady is crazy about the “Relationships in Nature” charts. Check it out!