Let us usher in the New Year with dragonflies. Two of them.

Whiteface dragonflies are in the genus Leucorrhinia in the large (1,000+ species) and glorious Skimmer family Libellulidae. There are about 100 Libellulid species in North America, and seven of them are whitefaces. We visited whitefaces in 2011 in the person of the Dot-tailed Whiteface. 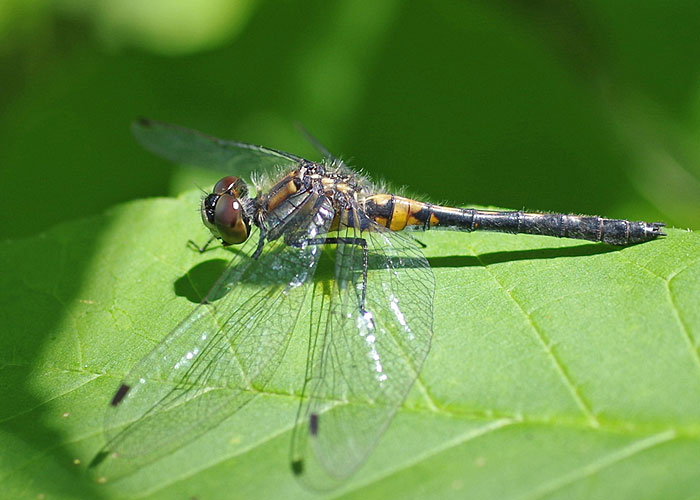 Whitefaces are smallish (1 ¼” to 1 ½”), dark, black-legged dragonflies that, if you get a front view, have conspicuous white faces. They are more brightly-colored when young, developing varying degrees of pruinosity (a covering of tiny, waxy flakes); immatures and younger females have yellow spotting. Some male whitefaces have striking, red markings, and of the others, the Wisconsin Odonata Survey says “Because species within this genus are similar-looking and change in appearance as they age, careful observation and considerable practice is required to correctly identify both genders of various ages of all species.” The BugLady is still practicing.

Both species are roughly northeastern in distribution, ranging from the northern Great Plains, across the northern tier of states, well up into Canada and east to Nova Scotia, but the Belted Whiteface is found farther west than the Frosted. Dennis Paulson, in
Dragonflies and Damselflies of the East, says, “well-adapted to northern latitudes, they are almost always seen perched flat on light-colored rocks, logs, and tree trunks in the morning, where their dark coloration allows quick warming in the sun.” They like ponds, lakes and marshes with lots of emergent vegetation and boggy edges and maybe a bit of floating sphagnum thrown in for good measure.

Mating is a longish procedure, 20 to 30 minutes, and after perching for a while, the female oviposits solo (but hover-guarded by the nearby male), tapping the tip of her abdomen on the water’s surface.

Chunky, aquatic naiads (and here’s an “empty”,) feed mostly on small aquatic invertebrates (larval mosquitoes, flies, mayfly naiads, freshwater shrimp. etc.), supplemented by the odd tadpole and tiny fish; their hunting strategy consists of lurking in the submerged pondweeds and ambushing rather than actively pursuing their prey. It’s tough/impossible to distinguish between the naiads of these two species. Adults hunt from a low perch, flying up to catch butterflies, moths, ants, mayflies, flies, and mosquitoes.

Their flight periods overlap, with the Belted starting a little earlier (mid-May) and the Frosted finishing a bit later (early September). 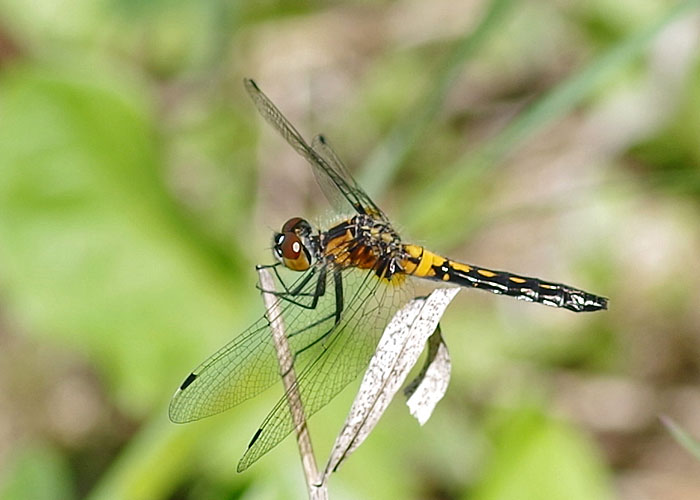 The FROSTED WHITEFACE (Leucorrhinia frigida), check this for more information on Leucorrhinia frigida. Frosted Whiteface is a tad smaller and stockier than the Belted Whiteface, and some books say that it can be mistaken for a Chalk-fronted Corporal at first glance. Males may defend a small mating/ovipositing territory (a few square yards) against intrusion from all comers, not just those of his species. If a rival male approaches while his female is ovipositing, he will intercept the intruder and hold him until she is finished. When she’s not ovipositing, a female lives away from the water. Kurt Mead, in Dragonflies of the North Woods, says that “the Frosted hunts from a perch on low plants along the water’s edge. May also pursue prey through low vegetation, zipping through the maze of stems.” 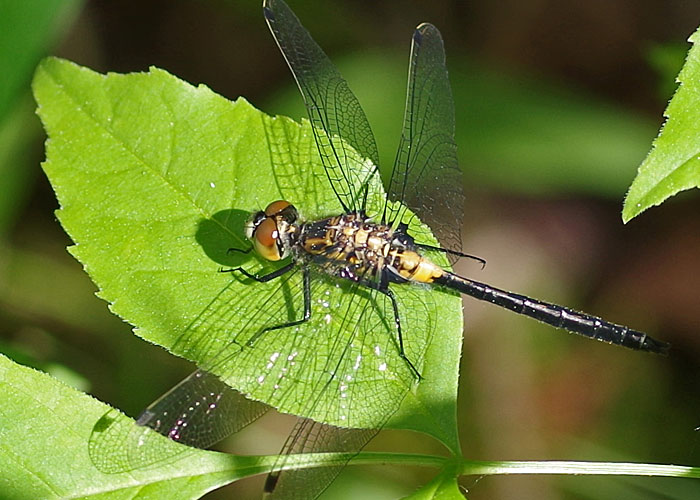 The BELTED WHITEFACE (Leucorrhinia proxima) (hopefully), was renamed in 2010, its old name being the Red-waisted Whiteface https://bugguide.net/node/view/433450/bgimage, and https://bugguide.net/node/view/1243815/bgimage. Here’s what the older males look like. According to the Wisconsin Odonata Survey, the farther east you go, the more likely it is that the males will have yellow “belts” instead of red ones, and we have both color forms here.

Males only chase other males of the same species, and they sometimes attempt to attach themselves to a mating wheel consisting of a female and another male.

Paulson notes that “Away from water, perches on ground to well up in trees. Pairs couple at water, immediately fly in wheel away from water into shrubs and trees.” Mead adds that “The Belted may disappear when the sun dips behind a cloud; when the full sun returns, so will the Belted. This is true for many dragonfly species, which need solar heating for optimal flight efficiency.”

They both appear in lots of on-line photo galleries.

Check out the new (3rd) edition of Kurt Mead’s Dragonflies of the North Woods.