The BugLady got a very special request from almost-5-year-old BugFan Jolene, who is curious about “ant flies” (a.k.a. flying ants).

The BugLady will try to answer her questions, keeping in mind that ants are a huge group (12,500 species ID’d so far, globally, and maybe that many more awaiting discovery; 700 species in North America, 30 of them non-native.). There are very few “always-es” or “nevers” as far as the life styles of ants are concerned, so the BugLady may generalize a bit. Turns out that this is a pretty timely request, considering that tennis at Wimbledon was interrupted recently by ant flies. 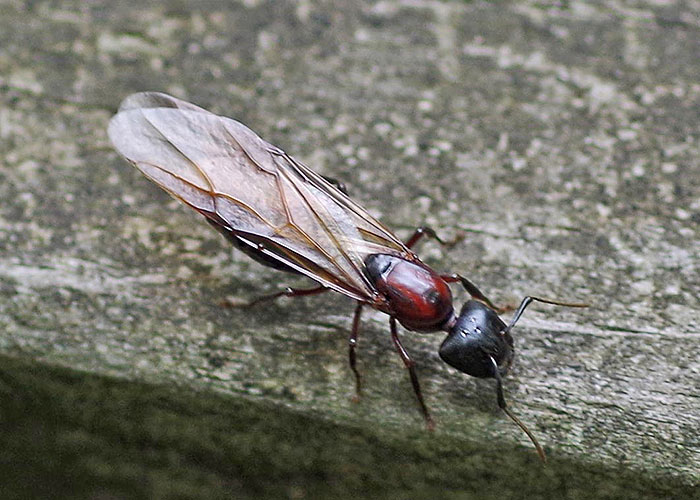 It’s been a while since we visited the ants. They’ve had supporting roles in a number of BOTWs and starred in others, beginning with Ants (101) in 2008, then Western Thatch Ants and then an episode about the mound building The Ants of CESA. As charter BugFans may recall, the BugLady has had her moments with ants, and she is sure that somewhere in the mind of the Collective, they remember.

A little about life in an ant colony:

Ants (family Formicidae) are social insects that live in colonies made up mostly of sterile, female workers (sometimes many thousands of them) that do different jobs that support the community. A worker may rotate through a number of tasks in her life; she starts “inside,” doing digging/maintenance or caring for the nursery or garden or queen, but when she’s reaching the end of her life span (which could be as long as one to three years), she is more likely to be “assigned” a more dangerous “outside” job like soldier or forager. Why? Because, actuarially speaking, she’s considered more expendable as younger ants join the workforce. No sentiment in an ant hill! 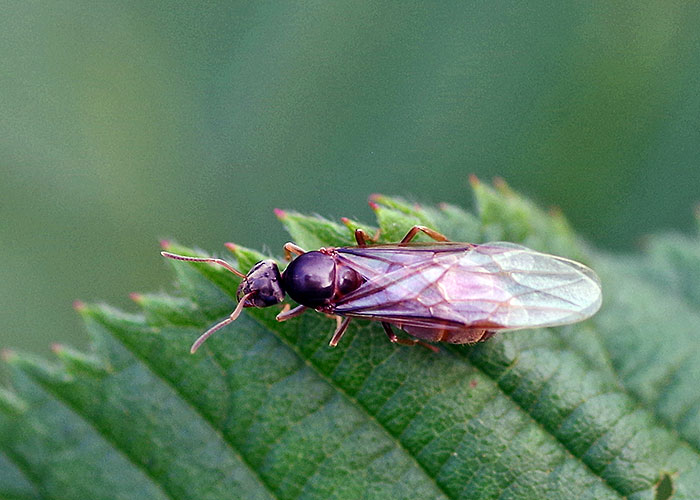 There is also a queen (or queens—see the thatch ant episode above), and, once a year, drones (fertile males) and virgin queens. Royal ants are not produced until the colony reaches a certain level of maturity/stability/population density, and then they are produced (usually) annually. In many (but not all) species, the queen is the only one who can lay eggs. In some species, she may live for 20 or more years, but generally, unless there are multiple queens, the colony dies when the queen dies. 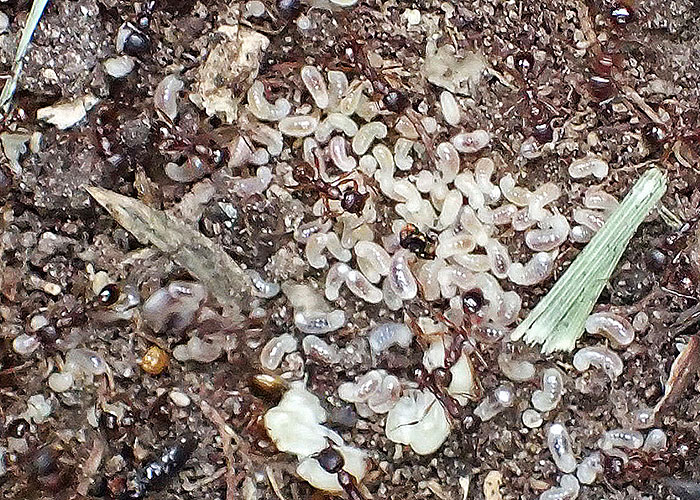 Why do some ants get to fly but others don’t?
Most of the ants in an anthill do not have wings and will never have wings and will never leave home except to look for food nearby. But, once a year, the nursery ants feed some of the young ants some special, extra food that lets them grow wings. They get to fly far from home and start new anthills so there are more ants.

Do ant-flies have a special job in their family?
All the other ants in the anthill have jobs, but the ants with wings (usually) don’t work—the worker ants take care of them and feed them. The ant flies’ special job is to be a royal ant “prince” or “princess.”

Are their classmates jealous of their wings?
Ants know what to do without thinking—they have amazing instincts—and they can even learn from other ants (and, as BugFan Linda points out, “Every animal knows more than you do,” a Koyukon Indian proverb from northern Alaska). Ants do their jobs and don’t make a fuss about it and (probably) don’t get jealous.

Do they get to have the wings their whole life or do they have to give them back?
Royal ants just have wings from the time they come out of their cocoon in the ant hill until the time they fly into the air on “Flying Ant Day” (more about that in a sec). They mate in the air and then the females start looking for a good spot to start digging their own anthill. It’s pretty tough to tunnel into the dirt with a big set of wings dragging behind, and the wings would get shredded, and she doesn’t need them anymore, so before she starts digging, the young queen will break or chew her wings off and never have wings again. The males die and don’t help with the new anthill. 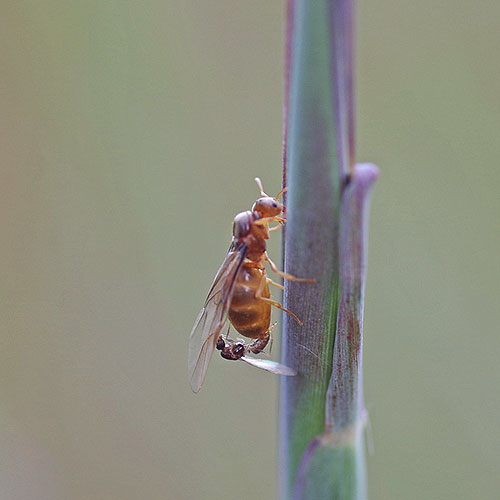 So, what signals ants to, as one author puts it, “erupt from the ground?” Phenology, for one thing—species fly at distinct points in the summer/fall and at different times of day; each species’ schedule separates them from other species and helps to prevent males from wasting energy chasing an unsuitable bride. Weather, for another—many species wait for a warm, calm, humid day, preferably after rain. They fly better in damp air, and wet soil is easier to excavate.

Females fly away from their natal hill, and they fly fast, and they don’t release their “come hither” pheromones until they’ve put some distance between themselves and home (and the princelings that they share a gene pool with). 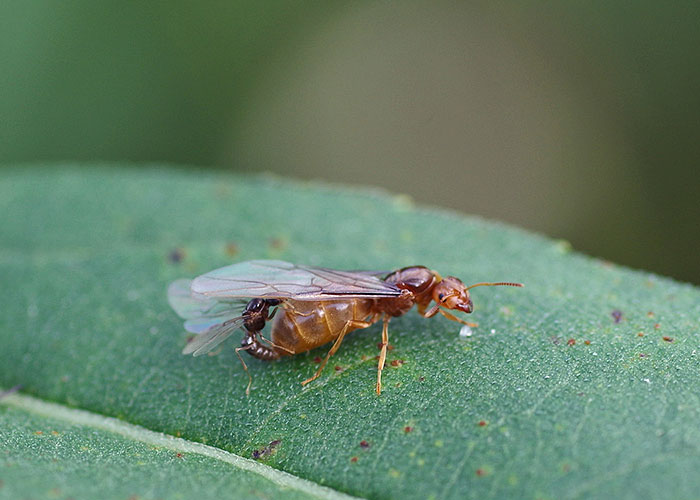 It didn’t take much poking around on the internet to discover that “Flying Ant Day” is an internationally noted phenomenon (Googling “ant nuptial flight” will result in a fascinating list of “related searches” at the bottom of the page, too). Find out about the UK’s National Flying Ant Day here, (cookie alert) including information and a podcast about The Royal Society of Biology’s citizen science Flying Ant Survey and a bit about drunken “seagulls” (apologies to birders everywhere) that apparently find ants delicious and are “stupefied” by the ants’ formic acid content (imagine living in a country that takes a national interest in such things).

And a little more about life in an ant colony:

When the young queen lands, she has probably mated with several males (ensuring some genetic diversity for her offspring) and she will store and use the sperm for the rest of her life, fertilizing hundreds of thousands/millions of eggs. She digs an initial tunnel, makes a chamber, lays her first eggs, and cares for them herself. Because she tends this first brood alone and her foraging may be limited, the workers she rears are smaller and weaker than future workers will be. When they emerge, they take over all the chores.

The mortality rate for young queens is huge, due to predators that are attracted to the nuptial flight, weather, failure of the first brood, marauding rival ants, etc. Several sources said that maybe a single one of the potential queens a colony produces in its lifetime might survive!

Side note—No matter how cleverly you word your Google search about ants, a myriad of exterminator sites pop up, giving you interesting details and fun facts about ants right before making their big, chemical pitch.

Also, there are some really committed groups of ant fans out there, and lots of instructions for starting your own ant farm. Some people track Flying Ant Day in order to take home a young queen and start an ant farm. Remember, depending on species, ant hills in the wild have populations from the hundreds to many-thousands. And nuptial flights.

For lots more information in very readable form (though it seems to be a translation and sometimes reads like one), try: www.antkeepers.com.

Thanks, BugFans Jolene and Caitlin.

Note—The Riveredge Nature Center Dragonfly Survey is right around the corner. Join us on July 22 from 10 AM to 3 PM (come for all or part of the day). No experience necessary—wear good walking shoes and bring binoculars if you have them and munchies if you need them. Call Mary Holleback at 262-416-1224 for more info or to register.

Cedarburg Bog is a rare habitat for southeastern Wisconsin