This episode features two beetles that are found on flowers. Though noticeably different in shape, both have the yellow and black coloration of wasp/bee mimics, and both have larvae that love wood. Other than being fellow beetles in the order Coleoptera, they are not related.

Flower longhorns are in the Longhorn beetle family, Cerambycidae. Cerambycids include some of our most elegant beetles. They often have long legs, too, and many come in striking colors and patterns. Cerambycids vocalize—a squeak, really—by rubbing the outside edge of their head against the inside surface of their thorax. The flower longhorn pictured here is in the genus Strangalia, a bunch of “big-shouldered, slender-bodied” species that decorate the eastern half of the country. The BugLady is guessing that this flower longhorn is Strangalia luteicornis, a beetle that is listed as common east of the Mississippi, but one that is in need of a common name. 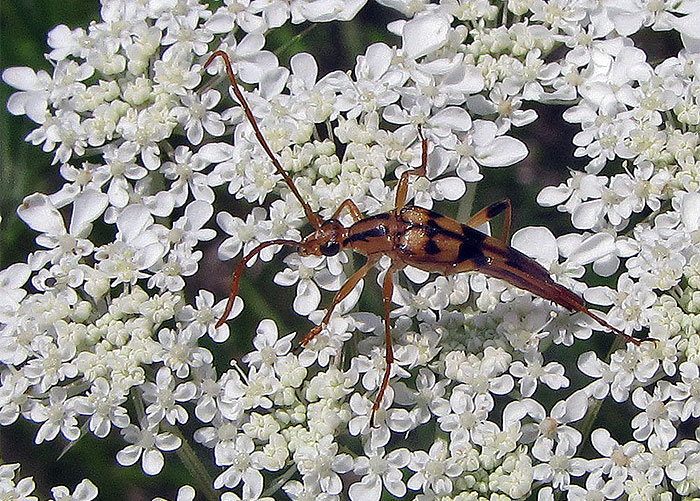 Adult flower longhorns can be seen on flowers in late summer, searching for nectar and pollen to eat. They are wasp/bee mimics, with maybe a little Soldier beetle mimic thrown in for good measure. Soldier beetles share the orange/yellow-black color scheme of wasps, and they also make noxious chemicals for their enemies, which makes them worth imitating. Flower longhorns lay their eggs on/in the wood of a host tree or vine, and their larvae hatch out and burrow in. They bore during the warmer months, overwinter as larvae, and awaken in spring to bore some more. When mid-summer comes (sometimes when mid-summer of the following year comes), it’s time to pupate. They leave the depths of the wood and pupate in a small chamber they create just under the bark of their tree.

Spotted Flower Buprestid is a name given to a genus in the family Buprestidae. Buprestidae is the family being made (in)famous by the invasion of that wildly destructive Asian alien, the emerald ash borer, which appeared here in God’s Country in 2008. In a family—the Metallic Wood-borers—that’s famous for being shiny, the largely western genus Acmaeodera is hairy and dull. This beetle is, probably, Acmaeodora pulchella (pulchellos is Latin for beautiful) one of the more widespread and eastern species. While the long-horned beetle Strangalia lacks a common name, this guy/gal has more than enough names to go around—Hairy Yellow-marked Buprestid (HYmB), Yellow-marked Buprestid, Spotted Flower Buprestid, Beautiful Flower Buprestid, Flat-headed Sapwood Borer, and in the more southern part of its range, the Flat-headed Bald Cypress Borer. A glance at the A. pulchella picture gallery in bugguide.net demonstrates how variable the “Y” in HYmB can be. Though widespread and more-than-adequately named, they are inadequately studied. 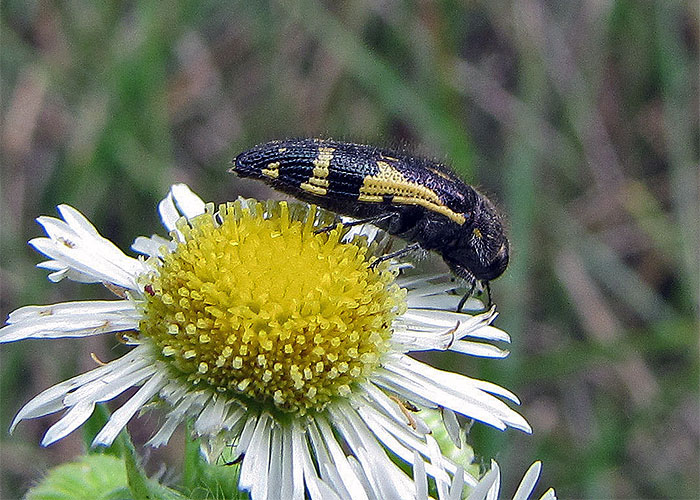 Adults are found eating pollen and nectar on flowers, especially on yellow flowers, which they “match”; they like meadows edged by trees (a nod to the next generation). Adults are hard to catch because they are good sprinters and good flyers. “Flat-headed borer” refers to the larvae, whose thorax is flat. Most buprestid larvae are wood borers, though some are leaf miners, and as a group, they are responsible for serious damage to both living and felled trees. HYmB larvae bore into the wood of several groups of trees, including pines, hawthorns and honey locusts, and there they live, chewing trails called “galleries” below the bark or into the wood itself.

In her on-line research on this beetle, the BugLady found a reference to the HYmB’s inclusion in a book on insect/arthropod defense mechanisms by the famous Cornell entomologist Thomas Eisner, who specializes in invertebrate chemical warfare. None of the other (meager) information on the web alluded to this, and the BugLady will track down the information and report back.