The BugLady confesses that she and her camera walk past lots of small flies without stopping because there are already too many flies in her “X-files” (she labels unidentified insects as “x beetle 7” or “x fly 16”). But—here are some “x-flies” that she was able to track down—or stumble upon by accident. Once again, we celebrate the bugs that are neither big enough nor bad enough nor good enough nor flashy enough to inspire study–or even, in many cases, to have been assigned a common name.

The BugLady is constantly surprised by the shapes and colors that Snipe flies (family Rhagionidae) come in (this summer, she observed a Rhaggio snipe fly darting about on a leaf top, bowing its head down to the leaf and pushing its face over the surface, stopping to peer down through a small hole in the leaf—a story for a future BOTW, if she ever figures it out). These small, black, big-eyed flies, the clear-winged Chrysopilus proximus and the smoky-winged C. quadratus (probably) are, surprisingly, in the same genus as the splendid Golden-backed snipe fly, of previous BOTW fame (chrysopilus means golden hair). Chrysopilus snipe flies are distributed (more-or-less) world-wide. Their larvae live in rotten wood, in the water, or in very moist soils, where they eat tiny invertebrates or insect eggs. Chrysopilus quadratus larvae live in rotting wood.

Those amazing eyes! Chrysopilus quadratus males are darker than females, and their eyes touch each other; females are honeybee-colored, with widely separated eyes. They have a square-ish spot on each wing.

Fruit fly evokes images of tiny Drosophila melanogaster flies (family Drosophilidae, a.k.a. Vinegar flies) hovering over fruit bowls, of biology experiments, and of populations of red-eyed, minimally-chromosomed escapees haunting the hallways and snack rooms of scientific institutions. The name fruit fly is more properly claimed by members of this fly’s family, Tephritidae. This little fly with the macramé wings is Euaresta bella (probably). The genus Euaresta is endemic to the New World, and nine of its fifteen species are found in North America. Euarista bella is one of two species that have been exported on purpose. Why? Because the host plants of the various species of Euarista are common ragweed, giant ragweed, and cocklebur, which are unwanted in many of the places they grow. 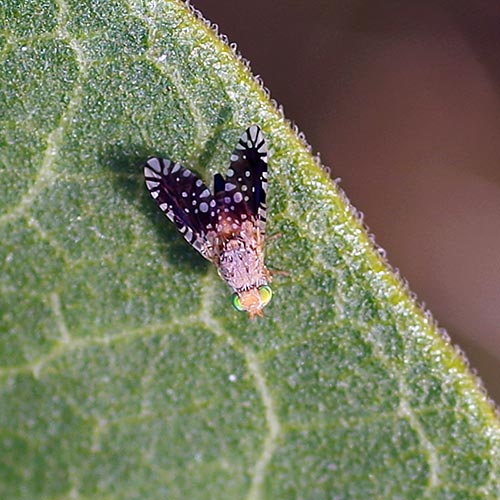 Euarista bella specializes in common ragweed, overwintering in the seeds and pupating in spring. The adults feed on ragweed juices and on honeydew (aphid by-products that drop onto leaves and are subsequently harvested by various wasps, flies, etc.). You would expect that wings like that would be used in ritualized behavior, and you’d be right—courtship includes wing-waving along with head-butting and proboscis-touching.

Flutter Flies (really!) are somewhat related to the Tephritidae but are in the family Pallopteridae. It’s a very small family with only 70 species, nine in North America. Their other common name, Picture-winged flies, is borrowed from another fly family, the Otitidae/Ulidiidae. Not a lot is known about the biology of the Flutter flies; some of their larvae are vegetarians and some are parasitoids of the larvae of a variety of wood-boring beetles. Larvae are found under tree bark or in flower buds and plant stems, and adults can be seen on flowers and low branches. Yes—“Flutter flies” because they vibrate their strikingly-patterned wings. 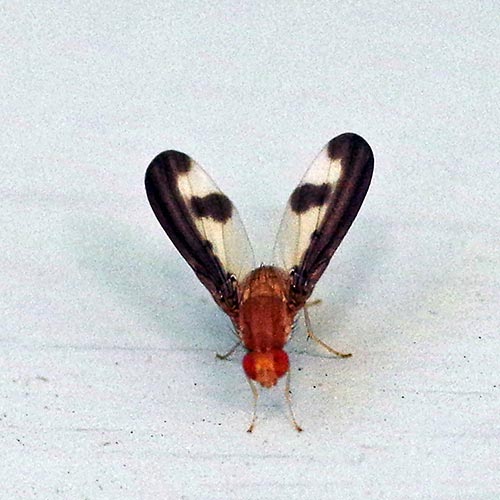 The BugLady read about a British study that suggested that some Flutter fly larvae (they call them Trembling wing flies) may feed on fungal mycelium under maple bark in the absence of beetle larvae.

Syrphid/Hover/Flower flies, of previous BOTW fame, are masters of deception that wear the colors of bees and wasps in order to discourage predators. Adults are harmless nectar and pollen feeders, but their offspring, depending on the species, eat insects (some are prized for the attention they pay to aphids) or eat decaying organic matter on land or in the water. The larvae of Parhelophilus are aquatic and are among the species nick-named the “rat-tailed maggots” because of a breathing tube at the tip of their posterior that they to the surface from the mud or debris at the pond floor. 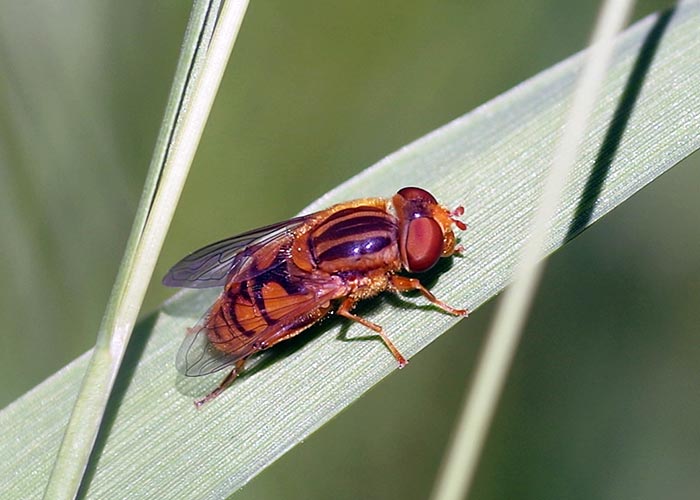 Parhelophilus syrphids (the BugLady isn’t going to guess at the species) are found throughout most of the continent. Their larvae like to live among the cattail rhizomes and can tolerate water with some pollution and a low oxygen content. The BugLady found this beautiful fly a few feet from the edge of what probably was its natal pond. They are often seen sunning themselves.

The BugLady recommends this TED talk: