This episode carries a NftFoH rating (that’s “Not for the Faint of Heart”).

Past BOTW episodes have revealed the preoccupations of several insects that fill the vital “Gravedigger” niche. Green bottle flies (blow flies) find carrion quickly and move rapidly from egg (often laid on carrion) to larval (maggot) to pupal to adult stage (flies practice “complete metamorphosis”). Some adult carrion beetles feed directly on the larvae of flies and beetles that may compete with carrion beetle larvae for space at the carcass; other species of carrion beetles import mites to eat the competition. Hairy rove beetles eat fly maggots at the scene of the crime. The life cycles and idiosyncrasies of all of these insects have been carefully charted by forensic entomologists because of the clues they give about time of death.

Another darling of the CSI folks is the flesh fly (family Sarcophagidae, from the Greek sarco, for flesh and phage, for one that eats). With the exception of South America, flesh flies are common around the globe. They are outdoor flies, preferring the intersect where dung/decaying plants/decaying flesh meet daylight. The larvae of some species act as biological controls that eat or parasitize snails, wasps, bees, beetles, grasshoppers, forest tent caterpillars, and some fellow flies, but as a group, they are scavengers on dead stuff. Most references feel obligated to include a description of a carcass roiling with internal maggot activity, like the proverbial bobcats in a burlap bag. The name “flesh fly” comes from the habit of a few (but not all) species of laying their eggs in open wounds. Adult flesh flies locate by odor and feed upon a variety of gooey and fragrant liquids that the BugLady will leave to BugFans’ imaginations. They don’t bite. 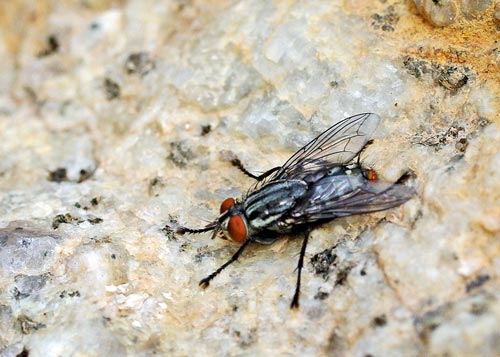 There are a bunch of technical details, well beyond the BugLady’s ken, that separate the flesh fly family from the look-alike blow fly and house fly families. Today’s pin-up, slightly larger than a house fly, is in the genus Sarcohphaga, a handsome, tweedy-looking group that is typically decorated with three black stripes on the thorax, forward-facing red eyes, and what one author calls a “red tail light.”

In The Handy Bug Answer Book, Dr. Gilbert Waldbauer describes how male flesh flies find their sweeties through a behavior called “station taking.” The male flesh fly perches in a “lookout” spot. Like most insects, his vision is less than 20-20, despite all those compound eyes. When he spots an insect/moving object in the right size range, he flies out and “grapples” with it. If it turns out to be a female of his own species, he and his newly-found mate will retreat into the nearby vegetation to copulate. The two probably recognize each other at close range by means of pheromones, quite likely a distinctive flavor that they perceive through taste organs that they are known to have on their feet. If the ‘station taking’ male contacts a male of his own species or a member of some other species, he quickly breaks contact and returns to his perch.” Waldbauer goes on to say that if you toss a small, dark object into the area a male is monitoring, he will fly out and grab it. 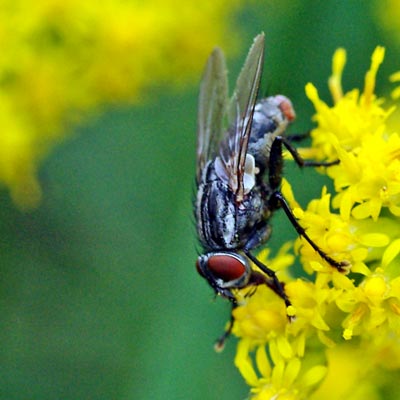 Although flesh flies are not the first flies in line at a corpse, an amazing adaptation allows these latecomers a competitive spot at the table. Flesh flies don’t oviposit (deposit eggs), they larviposit (lay live young directly on the food source, whether animal or vegetable). A female flesh fly can deposit 20 to 40 little tykes on a choice substrate in one sitting, and she may produce more than 300 offspring per season. Having larvae that “hit the ground running” is an uncommon talent among insects.

After satiating themselves on decomposing organic material for a few days, the flesh fly larvae leave the feast and pupate in the soil. This resting/changing stage is also short, and a three-week-old flesh fly is a senior citizen. There are several generations during the warm season, and the final brood of the year pupates in the soil over the winter.

The “down side” of flesh flies is that though they do not generally carry disease, their feeding habits make them potential carriers of a doozy—leprosy (now called Hansen’s disease). But Hansen’s disease is rare, and just because an insect can carry a disease doesn’t mean that it is carrying that disease.

The BugLady likes to continue her research until she finds something surprising about her subject. The flesh fly yielded two fun facts. The first is the larvipositing. The second is the Eastern flesh fly (Sarcophaga sarraceniae). Its species name sarraceniae comes from the name of the pitcher plant family Sarraceniaceae which, in turn, was named by the Great Namer, Carl Linnaeus for a Dr. Sarrazin, an early 18th century practitioner in Quebec who claimed success in treating smallpox with the pitcher plant. The Eastern flesh fly lays some of her eggs in pitcher plants, where her larvae feed on the dead insects they find in the pitcher water. When it is ready to pupate, a larva makes a hole through the bottom of the pitcher so it can pupate in the soil. Unfortunately, its exit hole drains the water out of the leaf.

What follows is the first-ever BOTW NftFoH (Not for the Faint of Heart) postscript. If you suffered twinges while reading the original the flesh fly BOTW, proceed at your own risk. Thank you, Dragonfly Woman, for sharing.
P.S. Following the posting of the flesh fly episode, this comment came from a fellow insect-lover, Dragonfly Woman (be sure to check her blog at Dragonfly Woman for some great insect information). “Sarcophagids may be gross, but aren’t they handsome flies? I think they’re gorgeous! That said, when you have their larvae spewing out of a mantid you’re trying to pin, it’s less than appetizing. That incident likely scarred me for life and definitely qualifies as “gross.” I stuck a pin in the mantid and the larvae came absolutely shooting out of the back end! They landed on my dining table about a foot from the back of the mantid. It was horrible. I yelled, “Oh my god! That is the most disgusting thing I’ve ever seen!” as I did that little I-have-the-willies dance people do when they’re really disgusted by something, all while trying to prevent my entomophobic husband from seeing maggots writhing all over our dining table. But then I came to my senses, grabbed all the larvae, preserved them, and added them to my collection. I am an entomologist after all!”
Flies