Everyone’s heard a story about some poor soul who walks into their home after a two-week vacation and suddenly is covered with fleas halfway to their knees (which is as high as the fleas could make it on the first leap). This is called a “house infestation.” The BugLady’s dog happily contributed this “single” flea (there’s actually no such thing as a single flea). Yes, for a variety of very good reasons they are major pests. But, they are magnificently adapted pests, perfectly designed to live where they live (on mammals and birds) and do what they do (suck blood), and they deserve a small (but grudging) round of applause.

Design specs: Fleas are very small and are laterally flattened—look at a flea head-on and it’s easy to miss. Its slim body slips between the dense fur or feathers of its host, and it’s covered with backward-pointing spines, so it’s hard to dislodge. Streamlined? Its antennae are tucked away in grooves on a flea’s head, and it has no wings to get hung-up as it darts around. Need to change hosts? A flea can leap 7 inches vertically and 12 inches horizontally (200X its body length) from one warm body to the next. Strong? One source equates their strength to a human pulling 2 elephants around. Swat-able? Better swat hard; their exoskeletons are tough. Bloodthirsty? In aid of getting that all-important blood meal, flea mouthparts come equipped with 3 “piercing stylets.” 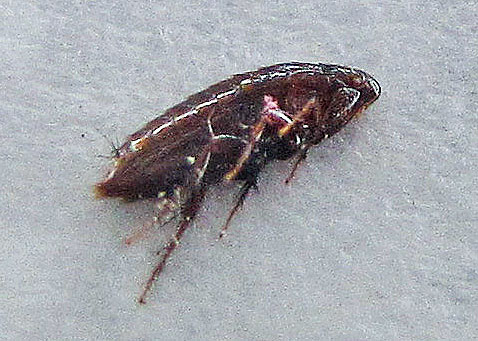 Fleas belong to the insect order Siphonaptera, from siphon (tube) plus aptera (wingless). Fleas are secondarily wingless, meaning that their ancestors once had, but then lost, their wings. Insects that are secondarily wingless are “better off” without wings. Thousands of species of fleas have been identified worldwide, but the fleas that most often bother people tend to be in the Family Pulicidae. They may have names like dog flea, cat flea, and human flea, but most don’t care about the taxonomy of their host as long as it’s warm-blooded. The human flea, Pulex irritans, is more common on non-humans like pigs, rodents, deer, mules, and household pets, and the cat flea (Ctenocephalides felis) is the common indoor flea on both dogs and cats.

A flea’s life cycle is also brilliantly fine-tuned for survival. Flea larvae are tiny, blind, legless, wormlike scavengers that develop in dark, humid places like cracks on the floor, animal nests, bedding, etc. There they eat organic matter including dead insects, dandruff, exfoliated skin, shed insect skins, plant material, and flea feces. The feces of adult fleas, high in undigested blood, are the base of a larval flea’s food pyramid. After a week or two as larvae, they spin silken pupal cases. The silk is “tacky” and picks up debris, camouflaging the cocoon. Fleas spend a week or two as pupae. They may hatch immediately, or they may remain dormant in their pupal cases until they sense the approach of a host, whether by vibration, sound, heat or by the host’s exhalations. If the host has been away for a while, all the pupal cases that await its return will contain adult fleas, and they’ll all pop out of the birthday cake at once. Presto—instant infestation.

The (admirably) devious rabbit flea monitors the hormone level of its bunny host, and when the EPT kit indicates that she is about to give birth, the flea starts manufacturing eggs. These she lays on the baby bunnies before migrating back to Mom and waiting for the next litter. One reference said that humans are the only primate that entertains fleas, because humans are the only primate that beds down in the same spot night after night, allowing larvae the opportunity to return to their host’s body as adults.

An adult flea must “break its fast” within a week of emerging from its pupal case, but after that first meal, a flea can fast for months. Without a blood meal, fleas can’t reproduce. In other blood-sucking species, like mosquitoes, only the female must drink blood; the male is a vegetarian. The BugLady didn’t find any mention of this kind of dimorphism in fleas. A feeding flea may siphon blood for as long as 4 hours at a sitting, but most of that volume goes straight through it and out the other end, released onto the host’s bedding to nourish the next generation that is lurking there.

Fleas are disease vectors that can spread typhus, tularemia, dog tapeworms, and plague. Like mosquitoes, fleas may be more attracted to some people than to others. When someone feels like a flea magnet, it might be that fleas truly do seek them out based on their personal “aromatic signature,” or it may be that they are more sensitive to flea saliva and react more intensely to the bites. At the very least, bites can cause itching, and scratching can cause secondary infection.

The exterminator’s mantra is: “Treat the pet. Treat the home. Treat the yard.” If you are “chemical averse,” one resource recommends sprinkling diatomaceous earth on the floor where fleas like to hang out and vacuuming it up in a week later. It’s a natural product, but use it with caution—no dust is wholesome when inhaled. It reputedly works by damaging the waxy cuticle of fleas and other floor-dwelling insects and causing them to dehydrate. The BugLady knows someone who used salt for the same purpose. Lowering the humidity with the heating/AC also helps knock down the population of larvae, and vacuuming corrals the majority of adult fleas.

Who said that good things come in small packages?