The BugLady wishes she were reclining under a sea grape somewhere, but instead she is courting Brain Freeze here in God’s Country. Please accept this revision of an earlier BOTW.

Before you dive into that, these two links were sent by BugFans Bill and Joe after last week’s BOTW about bumblebees:

The story of a metallic wood boring beetle may begin in a felled tree and end up in a palace. Not a rags-to-riches tale (because it might also end up in your kitchen or den), but the story of a group of pretty spiffy beetles, many of whose larvae make their living in the timber business.

Today’s star is a metallic wood boring beetle called (probably) the Flatheaded Poplar Borer (Dicerca tenebrica—unless it’s D. divaricata, the Flatheaded Hardwood Borer). There are about 25 species in the genus, and the tips of their elytra(the hard covers that protect the flying wings) are longish, a tad blunt, and slightly separated or flared at their tips (reminds the BugLady of an old-time-y men’s Morning Coat). Adult FPBs are found by day on pine and aspen trees. Eggs are laid on the twigs or bark (depending on who you read) of dead or dying Bigtooth Aspen, and the larvae chew zigzag trails (galleries) just under the bark, eating the protein and sugar of the sapwood for (officially) two to five years or (anecdotally) decades. They pupate under the bark and chew their way out after emerging as adults, which don’t eat much. Though it’s not as glamorous as some of its flashier cousins, let’s use the FPB to explore a few things Buprestid. This BOTW contains a record number of links, scholarly and not-so-scholarly, for BugFans to follow—like one of those Choose Your Own Adventure books.

Metalic Wood Boring Beetles (family Buprestidae) have starred in these pages before, most notably in the form of the Emerald Ash Borer, a recently arrived and horrifically destructive family member. The name Buprestid comes from the Latin buprestis, which comes from the Greek buos (ox) and prethein (to swell up), which boils down to “a poisonous beetle that causes cattle to swell up.” Your guess is as good as the BugLady’s. Other names for the group are “jewel beetle” and “flat-headed borer,” the latter a nod to the blunt or flat appearance of the larva’s head and shoulders. Most larvae are borers in roots, stems, or wood, but a few are leaf miners and gall-makers.

Buprestidae is a large family, with about 700 species in North America and 15,000 worldwide, and they are happiest in the tropics. They are sturdy-looking, bullet-shaped beetles that range in size from XS (about 1/8 inch) through XL (1 ¼ inch) with the FPB at the larger end of the spectrum. Buprestids have short legs and short antennae and are strong flyers. Many native species have a bad reputation for damaging trees, both standing and logged. The consensus is that most species don’t attack healthy trees, and some species target only fallen or logged trees, but the just-below-the-bark meanderings of the larvae ruin the top layers of saw logs. Ecologically speaking, the holes made by exiting beetles let the water, fungi, bacteria, and small organisms that are the authors of decomposition into a tree that was already a goner.

Many Buprestids come in startling and iridescent colors, which suggests that at least some of their communication is visual. According to Wikipedia, “The iridescence common to these beetles is not due to pigments in the exoskeleton, but instead physical iridescence in which microscopic texture in their cuticle selectively reflects specific frequencies of light in particular directions. This is the same effect that makes a compact disc reflect multiple colors.” Golden buprestids are a great example.

A Golden Buprestid beetle detour: The Olympic Spray Service Inc., in the Pacific Northwest, says the following about the Golden buprestid beetle: “The golden buprestid beetle is often taken for a wood boring beetle that is causing damage to a structure. It is, but its damage is usually restricted to the one board in which the beetle first laid its eggs. Sometimes these will be discovered in an open beam in a living room. This beetle requires no treatment. It [the larva] can stay in the wood for 40 years. The eggs are laid in the wood when it is green or first harvested. When it leaves it will not re-infest dry wood. The eggs were probably in the wood when it was first put into the house. It may be only in one board.” A Blog called “Nature in the City” told the story of a Golden buprestid beetle that emerged from a wooden cutting board that had been in someone’s kitchen for 29 years. A local expert theorized that as the cutting board (or exposed ceiling beam) dries, its wood becomes less nutritious and causes the larva to develop much more slowly. 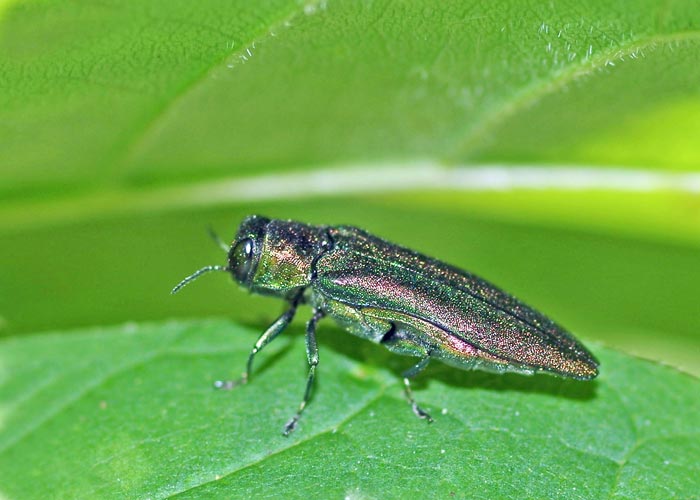 Buprestids in Art—not images of beetles, but art produced using beetle wings. Unfortunately, their shiny colors make some buprestids highly “collectable.” Their colorful elytra are used, especially in the Orient, to create amazing beetle-wing jewelry and objects d’art, some of which may be found on eBay, and they are regularly featured on postage stamps. The use of buprestids for and in art goes back several millennia; buprestids decorated King Tut’s tomb and a picture of an almost-4000 year old necklace with buprestid representations can be found at Gossamer Tapestry.

A contemporary Belgian artist named Jan Fabre used Buprestid elytra to create art pieces large and small, including a ceiling at the Royal Palace of Brussels. He is said to have chosen beetles as his medium because they’ve been around for a long time (though using 1,600,000 elytra for the Royal Palace might threaten that survival record). Wikipedia’s entry on Jan Fabre shows one view of the palace. Click on “A Bug-infested Ceiling” at the bottom of their entry for a few more views or go directly to A Beautiful, Bug-Infested Ceiling.

Buprestids in Textiles—the beetle-craft theme is continued in an article in the Cultural Entomology Digest (which is very readable but which also manages to slip in words like ethnoentomological) on an interesting website called Insects.org. For a discussion of the use of beetles in religious, ceremonial and everyday wear, check out Beetles in Textiles.

Buprestids in Religion and Anthropology—BugFans who are interested in accounts of these topics can read Beetles as Religious Symbols. The Egyptians may have admired buprestids because their emergence from trees echoed an incident in the life of the Egyptian god Osiris. There are other anthropology-related articles listed in the table of contents of the Cultural Entomology Digest.

Buprestids in the News—Buprestid public relations hit a low point when a 2 inch long species of Australian buprestid was awarded the Ig-Nobel Prize in September, 2011. In this species, the male courts the largest female available. Beetles were photographed courting and attempting to share bodily fluids with a newly-designed Australian beer bottle called a “stubby.” Apparently, the compact size and brown color of the bottle and the stippling at the base acted as a “super-stimulus” for the males.