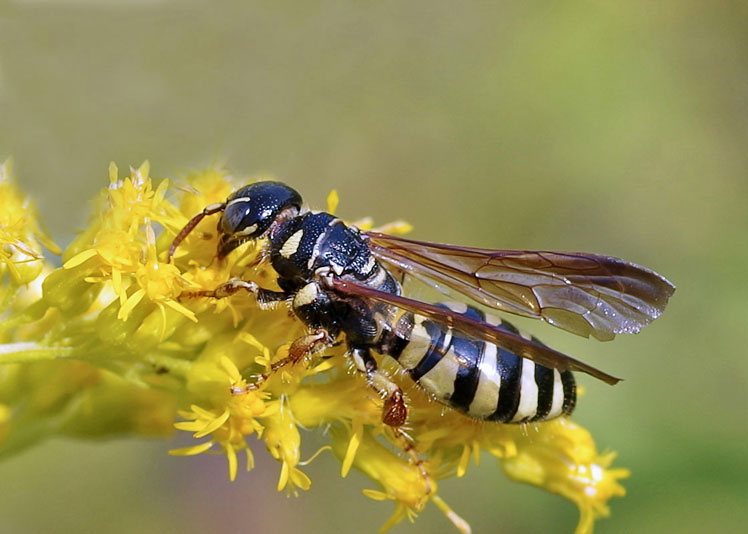 Back in the summer of 2009, she found a goldenrod that was enhanced by some very cool, inch-long wasps, a few of which had little hooks at the tips of their abdomens. She ID’d them as (probably) Five-banded tiphiid wasps (Myzinum quinquecinctum), one of about 10 species in the genus Myzinum in the family Tiphiidae. She qualified her ID with a “probably” because several similar species also live in the area, and they can be tricky. 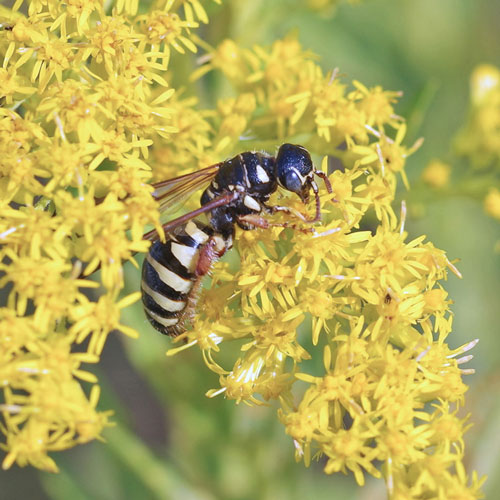 But that was then, and this is now. Now, when she looks them up, she finds them in the wasp family Thynnidae. Everybody in the genus Myzinum and in the subfamily Myzininae were reassigned. Recently. An article published in 2009 referred to the “taxonomic purgatory” of the genus and its potential for reclassification within the same family, and in 2013, one of the BugLady’s go-to, online sources still placed this genus in the Tiphiidae.

So, the lifestyle generalizations that the BugLady made 10 years ago—that adult Five-banded tiphiid wasps (FBTW) are solitary wasps that nectar on flowers, while their larvae are parasitoids on the larvae of a number of scarabs and other beetles that live underground or in rotten wood—were based on the lifestyle of what is now the wrong family. 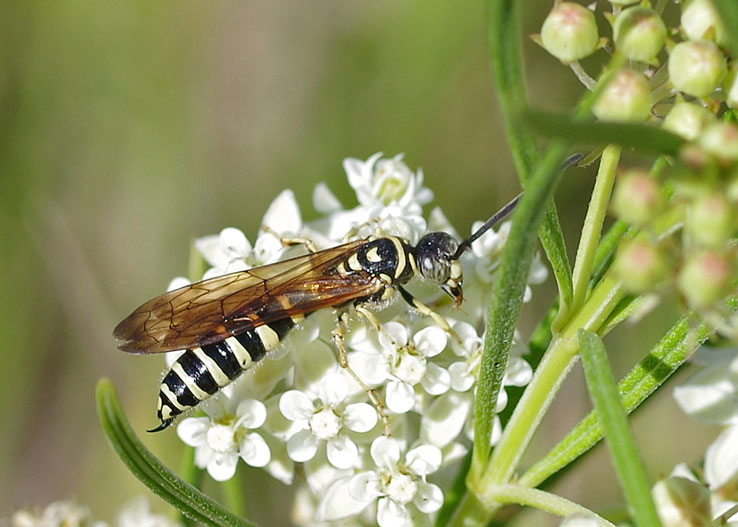 Who are the Thynnidae? They are solitary wasps that are sometimes called “flower wasps.” Adult thynnid wasps nectar on flowers. They like the composites and are considered minor pollinators, while the larvae of most species are parasitoids on the larvae of a number of scarabs and other beetles that live underground or in rotten wood. Yeah. If taxonomy (from the Greek taxis meaning “arrangement”) were based on function, our field guides would look pretty different; instead, it is based on form—nuances of physiology—and evolutionary relationships.

Females of some species of Thynnid wasps are wingless. Males find them on the ground and carry them into the air on a nuptial flight that may last an hour. This is probably the only time in her life that she’s significantly off the ground. Based on the internet hits, the family seems to be exceptionally diverse in Australia, though Myzinum is a New World genus. 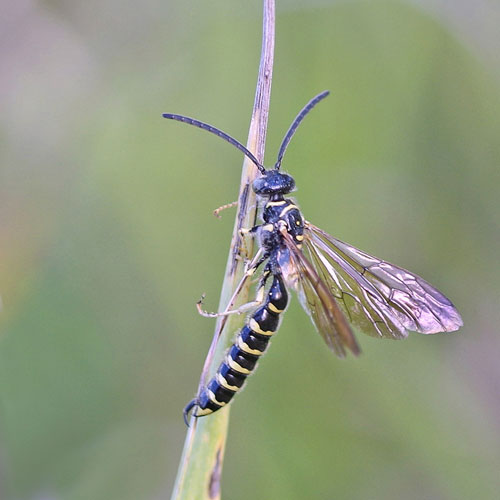 This species, still known scientifically as Myzinum quinquecinctum, is now referred to by some sites as the Five-banded thynnid wasp and by other sites as the “Five-banded tiphiid wasp in the family Thynnidae.” It’s found in grasslands and gardens in the eastern US from the Great Plains to the Atlantic, plus southeastern Canada and Costa Rica.

Males have straight, dark antennae, yellow legs, and brownish wings. Females have short, red antennae, sturdy red legs (for digging), and orange-ish wings. Her five bands are broader than his are, but they tend to be broken. The hook on the male’s abdomen is harmless, but the female’s stinger is functional. She uses it, after all, as an ovipositor.

Females locate a beetle grub in the soil, lay an egg on it, and inject some neurotoxins to immobilize it. FBTWs compete with the awesome American pelecinid wasp, which also deposits eggs below ground on scarab larvae . Some sites call FBTW larvae ectoparasites, consuming their host from without, while others say that the larvae are endoparasites, burrowing in and eating from within. To the host, it’s a distinction without a difference—the coup de grace is delivered shortly before the wasp larva pupates. The wasp overwinters as a pupa below the ground and emerges as an adult in early summer. One source said that thynnids are preyed on by Velvet ants, wingless female wasps in the family Mutillidae, who find their pupal cases and lay eggs on them. The hunter becomes the hunted. 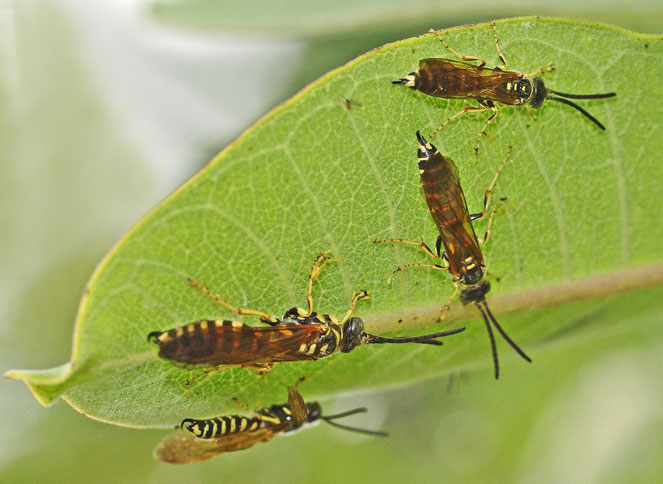 Along with their appearances on flower tops, congregations of male FBTWs are often found on leaves. The BugLady usually sees them on cool, overcast days. Speculation is that they are either waiting for the temperature to rise so they can forage or for newly-minted females to emerge from the soil. On his bugeric blog, entomologist Eric Eaton tells us that males “can also gather in ‘slumber parties,’ bedding down in evening in large groups on vegetation in fields and meadows.”