It seems like a stretch to call a mostly-black beetle “fire-colored,” but this is, indeed, a Fire-colored Beetle, in the genus Pedilus. There are some orange/red species in the extended FcB family, but many species have elytra (wing covers) that are black, and heads and/or thoraxes and/or legs that are red or orange. Both the head and thorax of an FcB are narrower than the elytra, and there’s a neck-like constriction behind the head. Most species of FcBs have antennae that are mildly pectinate (comb-like), but in some species the antennae have evolved spectacularly into dramatic, even antler-like fringes. See Bugguide.net http://bugguide.net/node/view/288258 and http://bugguide.net/node/view/53442 for pictures of fire-colored beetles that are “antennal overachievers.” 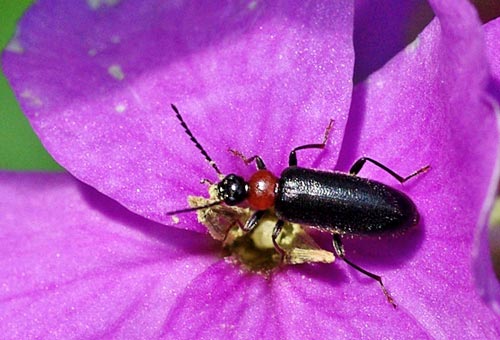 What extended family is Pedilus found in? The BugLady had to do a little detective work to answer that question, because she found them classified in three different families. They started out with the Ant-like Flower beetles, Anthicidae, and then they were split off and put into their own family, the False Ant-like Flower Beetles, Pedilidae. Most of the Pedilidae are now gathered under the umbrella of the FcB family, Pyrochroidae (pyro means fire; chroidae comes from chroma, means color). There are about 150 species in the family Pyrochroidae, including about 30 in the genus Pedilus. The BugLady thinks this might be P. lugubris (or maybe P. collaris).

Adult Pedilus are found on vegetation or flowers. According to the Kentucky Critter Files website, “Little is known about the biology of the larvae, but they are believed to be predators and likely feed on other wood-dwelling invertebrates like worms, termites, ants, and other beetle larvae…Less is known about adult fire-colored beetles, but they have been observed visiting flowers where they probably feed on pollen and nectar.” Some sources agree with the predatory larvae part, but others disagree, saying that they feed on fungus and rotting wood.

By now, seasoned BugFans should suspect that a red and black insect is communicating that it’s poisonous or tastes disgusting (or both). Toxicity is usually achieved when an insect is able to feed on something harmful and has the ability to either metabolize the toxins or sequester them somewhere in its body. Aposematic (warning) coloration allows the insect to feed in the open, trusting that predators will get the message. (Predators do, but they learn by experience and must sample a certain number of their poisonous prey first—Nature is careful of the species but careless of the individual.)

Male FcBs find blister beetles (BBs), climb aboard, and either

The great entomologist and chemical ecologist Thomas Eisner studied an FcB in the genus Neopyrochroa. When the male feeds on cantharidin, some of it is concentrated in a huge glandular groove on the top of his head (“No brains,” said Eisner, “just glands.”). During courtship, the female checks out the contents of the groove. If it’s empty, she’s not interested, but if it’s chemical-rich, she feeds from it and romance ensues. The spermatophore (sperm packet) that he subsequently bestows carries a larger load of cantharidin, and the eggs she lays are cantharidin-coated to discourage egg predators. Ms. BB also protects her eggs in this way. 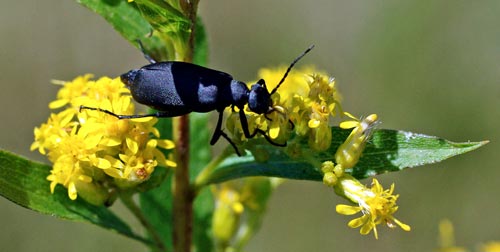 FcB eggs are laid under loose bark and in the rotting wood that their larvae call home. The BugLady didn’t find out whether the chemical protection of the egg extends to the soft-bodied larvae, which are especially vulnerable to the centipedes that share their habitat.

Eisner understood the role of cantharidin in FcB courtship and egg protection, but he doubted that there are enough BBs and False BBs to supply all the FcBs in the world, and so he wondered if there are other sources of cantharidin available. Researchers are investigating the idea of “chemical webs” in nature that link different species as surely as food webs do.

The BugLady found an interesting observation of FcB-BB interactions in a paper published by Butler in Entomological News in 1984. A BB was observed on the forest floor with two passive Pedilus beetles firmly attached by their mandibles to its elytra, their legs folded up against their bodies; a third Pedilus was zeroing in on the bunch. The BB seemed completely unperturbed about the situation. The Pedilus remained attached for 10 hours, and when they left, the author couldn’t find any damage to the BB except for a few scratches, so they weren’t licking/chewing. Butler mused that this might be an example of phoresy (when one animal uses another as a taxi) but wondered why a mobile insect like Pedilus would need a ride on an insect as sluggish as the BB (it would be like the Hare flagging down the Tortoise). Butler also speculated that since FcBs are attracted to BBs because of their cantharidin, the BBs might act as an aggregation site for FcB mating.

Brief footnote: In the Bad Ideas category, blister beetles were ground up in the olden days, cantharidin and all, and made into the aphrodisiac Spanish Fly, as well as medicines for baldness and rheumatism, even though these treatments were excruciating, and consuming as few as 20 beetles may be lethal to humans.