The BugLady would like to recant—just a little—a few of her previous words about inscrutable skipper butterflies (family Hesperiidae). Most skippers, small and hairy and quick, are brown, brown and orange, or orange and brown, and they look pretty much alike to the BugLady. She confessed her Skipper frustrations in a BOTW that focused on the lovely silver-spotted skipper and later wrote about the Arctic skipper. What those skippers have in common with today’s skippers—the Fiery and the Common Checkered Skipper—is a line in Mike Reese’s wonderful website about the Butterflies of Wisconsin, “Similar species: None (practically) in Wisconsin.” The BugLady likes that in a skipper.

Skippers are indeed butterflies, despite a statement in the University of California-Davis IPM Bulletin (Integrated Pest Management) that “Fiery skipper adults resemble butterflies,” and despite skippers’ un-butterfly-like habit of resting with their front and rear sets of wings in different planes (geometric, not air travel), which exposes more surface area to the sun.

Both of today’s skippers are summer strays to Wisconsin, the Fiery Skipper is rated as uncommon and the Common Checkered Skipper as rare. Their ranges lie in the southern half of the U.S. and along the Gulf Coast (the Fiery is found as far south as Argentina), but some individuals of each species vacation “Up North” each summer, even reaching Canada. If they arrive early enough (most Wisconsin records are from mid-summer until the first frosts), they may establish small breeding colonies, but because their offspring can’t survive northern winters, they must re-colonize annually.

The BugLady once again doffs her hat (or would if she wore one) to the folks at the Butterflies of Massachusetts organization, whose website puts about 150 years of thoughtfully analyzed butterfly observations at our fingertips. Based on their records, both the historic core ranges and the migratory ranges of these two skippers are inching north, and BoM speculates that both will become more common in northern climes as Global Climate Change proceeds.

The Fiery Skipper (Hylephila phyleus) is a lovely little skipper (1 inch long, 1 ¼ inch wingspread) that certainly merits the fiery part of its name. Females are orange and brown; males are molten gold with dark spots. 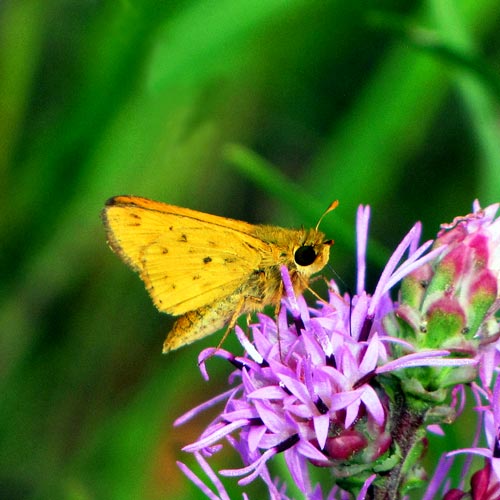 According to bugguide.net, the genus name Hylephila means forest/woods loving/liking, though most members of the genus inhabit sunny, open spaces like grasslands, roadsides, lawns, and gardens (several sources said that the FS is comfortable in habitats that are manipulated by humans). In fact, most members of the genus are found in sunny open spaces in South America (like the Andes); the FS is the only Hylephila in North America.

Seeing a butterfly on exterminator websites is a bit startling, but the FS larva is considered a pest of turf grass in part of its range. Within the Skipper family, FSs are in the subfamily Hesperiinae (the Grass Skippers). Adult Grass Skippers feed on nectar from flowers, but the caterpillars eat grasses like Bermuda grass, St. Augustine grass, Kentucky Blue grass, and crab grass, and the feeding of their caterpillars may cause brown spots and patches.

Eggs are placed randomly on or near host plants. The caterpillars create shelters on the ground using grass leaves that they roll up and secure with silk, and they also pupate within rolled grass leaves. When the adults emerge, females go off looking for suitable habitat for their eventual offspring, and males perch on low plants, looking for females.

According to Butterflies of Massachusetts, the “Common Checkered-Skipper in Massachusetts and New England is not known to use any hosts plants which are native here, but rather uses a number of non-native plants among the Malvaceae, primarily Common Mallow (Malva neglecta), which is naturalized from Eurasia, and other non-native mallows.” BoM concludes “Therefore, the Common Checkered-Skipper is among those North American butterflies which have successfully adopted non-native host plants.” Like the FS, both their permanent and their migratory ranges have moved north, first due to the habitat changes that resulted from agricultural clearing and now due to climate change.

CCS caterpillars hatch from eggs laid on host plants, and they also fashion leaves into a shelter to feed, hibernate, and pupate in. The caterpillars are not considered pests.

Adult females nectar on (and pollinate) a variety of late summer flowers. Males get sustenance from seamier stuff, like rotting fruit, carrion, and excrement, and they like to gather at the edges of mud puddles and shorelines.

The CCS, which is a member of the subfamily Pyrginae (the Spread-winged Skippers), basks with out-stretched wings and closes them when at rest. Members of the genus Pyrgus are called “checkered” or “grizzled” skippers. Both male and female CCSs are checkered, and the background color of the upper wings ranges from gray to dark brown.

Like the FS and the CCS, the BugLady is slowly extending her range into skipper country.