This small (half-inch), beautiful, feather-legged fly sat briefly on a plant stem about 5 feet away from the BugLady in the summer of 2009. She had just enough time to take a “Hail Mary” shot with each of her cameras before it flew, and she hasn’t seen one since. It was featured briefly in a recent BOTW about leaf-footed bugs, but it deserves a page of its own. 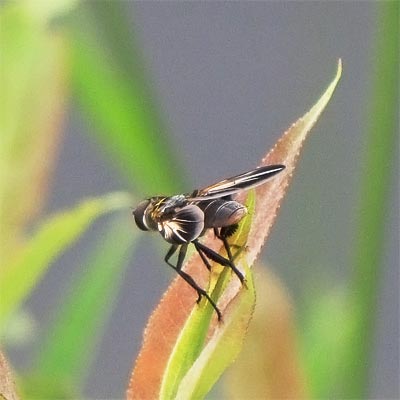 The BugLady is familiar with the largish (and sometimes creepy-looking) tachinid flies that ply the prairie flowers, looking for hapless insects to lay their eggs on, so it blew her away to discover that this delicate creature is also a tachinid. Feather-legged flies (FLFs) are tachinids in the genus Trichopoda (hair foot). There are six species of Trichopoda in the meadows of North America and more in South America; this is probably Trichopoda pennipes. If you look closely, you can see the distinctive fringe on its back legs. 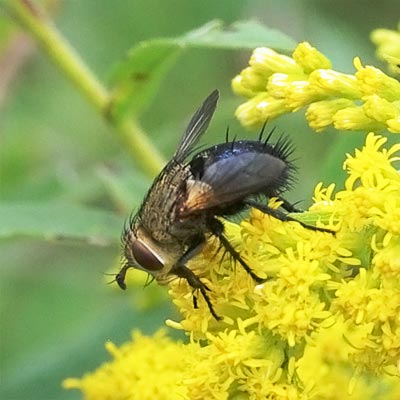 FLFs have the same MO as their bulkier brethren (sistern?). They cruise the flowers, looking for nectar for themselves and “warm bodies” for their offspring. Females may also search while hovering. FLFs specialize in stink bugs, squash bugs and leaf-footed bugs, many of whom are crop pests. Some strains of T. pennipes are quite host-specific, even being geographically host specific. The T. pennipes native to California apparently doesn’t like squash bugs, but the same species of FLF, in New York, does, so New York FLFs have been imported to California to pursue squash bugs. When they find the proper bug, they deposit one or more eggs on its under-surface. There’s not enough bug to share, so if she lays more than one egg, only one of her maggots will survive. Mom is good for a few hundred eggs. The maggot hatches, tunnels into its host, and feeds on the innards for two weeks before exiting to pupate as the host dies. There may be several generations per year, depending on the climate. 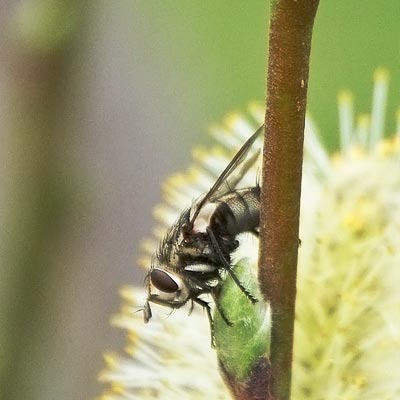 Because of their food preferences, FLFs are considered biological controls of some problem bugs, like the imported Green Stink Bug (Nezara viridula), an African stinkbug (very similar to the green stinkbug pictured here) now making itself home as a pest in croplands worldwide. The recently-arrived, invasive Brown Marmorated Stinkbug is not only a crop pest, it loves to come indoors in winter, increasing the areas of human-stinkbug intersection (everyone who remembers the New Math, raise your hand). 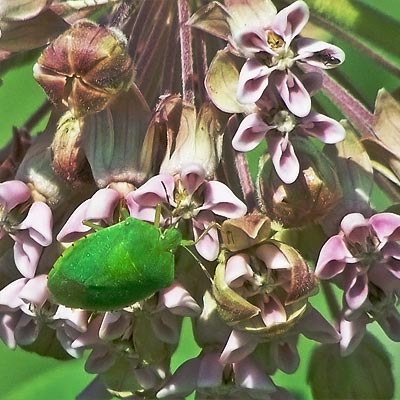 A Brief Stinkbug Detour: Stinkbugs, notoriously, protect themselves from predators by manufacturing nasty-smelling stuff in their thoracic glands and distributing it as needed. It’s very effective against natural predators, and there are quite a few posts online about how to wash the stink off your hands and what to do if you or your pets get sprayed in the eyes.

Stinkbugs (and many other insects) also produce chemical attractants called pheromones. Many of the insects that deploy pheromones use them to find Mr. Right (actually, to help Mr. Right find them). She wafts a “perfume” into the air and he zeros in like a homing pigeon. In the case of stinkbugs the pheromones, released by males only, are simply attractants of the “Dinner’s served! Y’all come!” variety, detectable by nymphs, females, other males, and even by stinkbugs of different species. Although bringing more mouths to the table may seem counter-intuitive, hanging out in a crowd is a kind of defense called the “selfish herd strategy.” Though there’s less food for all, predators have trouble figuring out the dynamic of the “blob” and segregating a single individual.

Stinkbugs will approach, but not necessarily contact, their pheromone source. The good news is that setting pheromone traps allows scientists/agriculturalists to survey and count stinkbugs; the bad news is that stinkbugs cannot be lured into traps with pheromones. BUT! But—by a wonderful joke of Nature, not only does stinkbug parasite T. pennipes not give a hoot about the stinkbug’s defensive secretions, it, too, senses and homes in on the stinkbug’s attractant pheromone!

Two antlion addenda: BugFan Chris, who lives in an antlion-rich environment asked for clarification about the statement that antlions bite. She can vouch for the fact that the adults bite (which would seem to argue that they also eat) but wondered about the doodlebugs. Only one of the BugLady’s sources said that antlions bite, and it was completely ambiguous about which life stage it was referring to. So–adults, yes; doodlebugs?
BugFan Mike says that the trickiest part of having doodlebugs as classroom animals is getting the kids to leave them alone long enough to dig their pits.
Flies