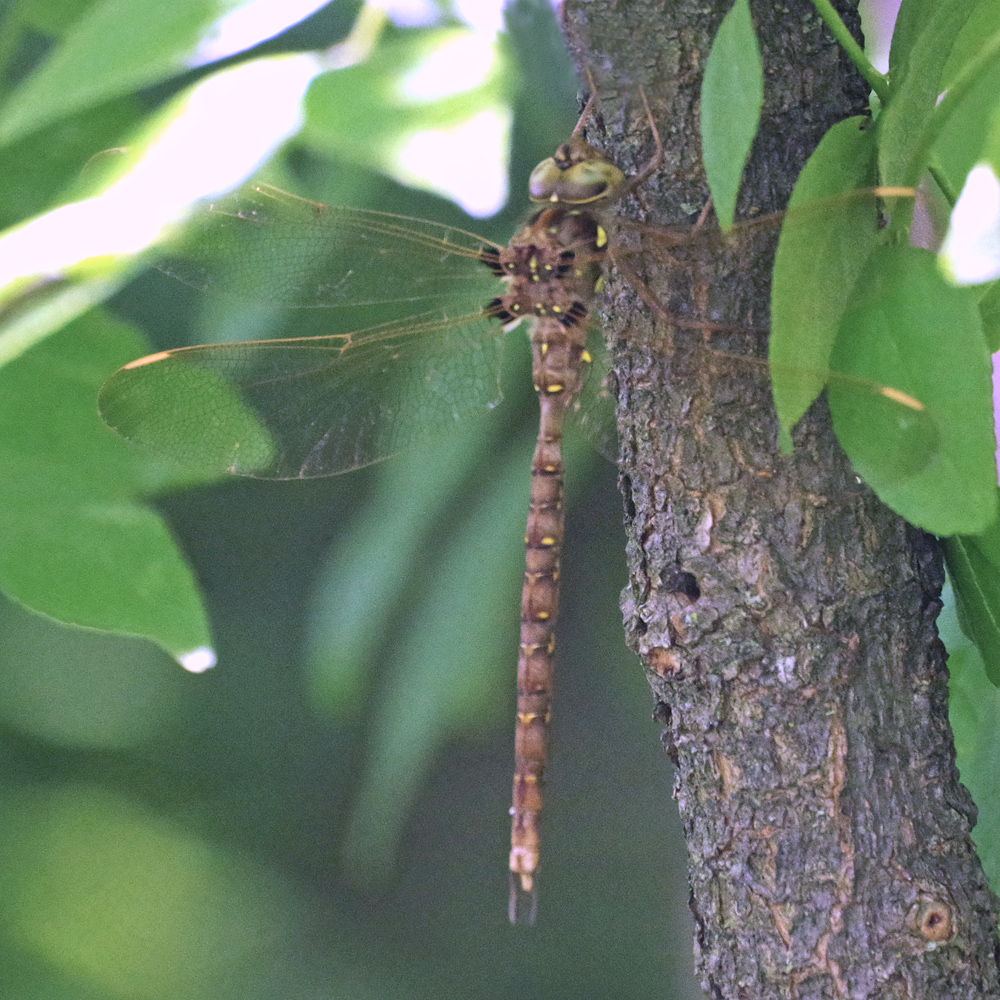 Another day, another darner.

The BugLady’s reward at the end of five hours in 80+ degree heat on the Butterfly and Dragonfly Count was a Fawn Darner. It flew across a shaded trail, looking decidedly orange as it went (the first of two “What the heck??” moments) and perched on a small tree trunk with its head up under the leaves. Judging from the Fawn Darner shots at bugguide.net, this is a typical pose. Happily for us, the folks at the Maryland Biodiversity Project have put together a set of exquisite pictures.

The second moment came when she got the dragonfly in her camera’s viewfinder. “Darner. What the heck kind of darner has black triangles at the base of its wings?”  This is a smallish (about 2½” long), slim, very drab darner with greenish eyes, dark triangles on the wings, and a couple of pale spots on each side of the abdomen that may be seen in flight. Males and females are similar.

Field guides list them as “Common” (“one of the most common anisopterans in streams of the eastern United States,” wrote one source), but this was a “lifer” for the BugLady. In fact, since 2002, there’s only been one other Fawn Darner report from Ozaukee County—in 2013, also at Riveredge. No records for Washington County, which was less than 100 yards away. Why hasn’t the BugLady seen them before?  They fly at a time and in a place where she wouldn’t necessarily be looking for darners, and in this and a few other ways, they depart from the usual darner playbook. 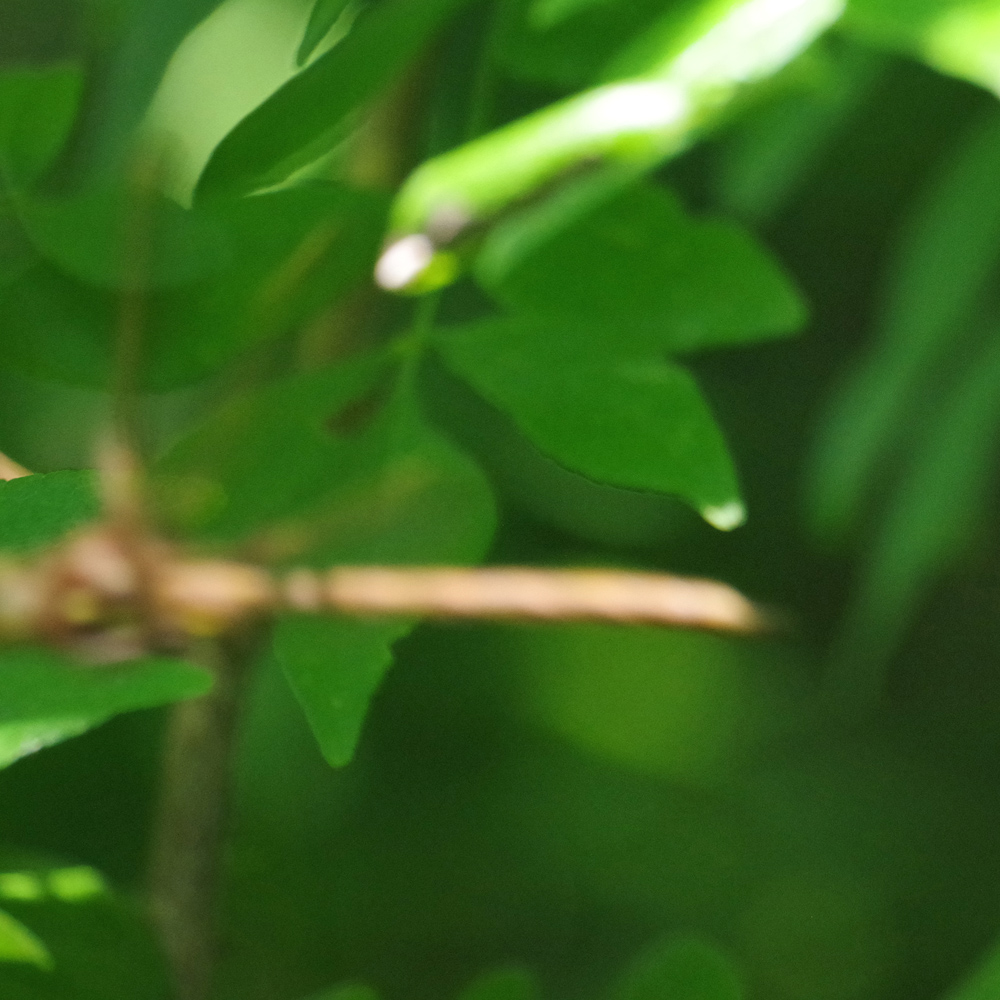 Fawn Darners (Boyeria vinosa) are in the darner family Aeshnidae. According to Cynthia Berger in her book Dragonflies, “Young deer, called fawns, are brown with pale spots—and so are Fawn Darners.” She continues, “The species name vinosa can mean “full of wine” or “wine-colored.” It’s not clear why this name was assigned to a brown dragonfly. Dragonfly expert Sid Dunkle speculates that the taxonomist who assigned the name was describing a preserved specimen that had become discolored.” There are seven species in genus Boyeria, the Spotted Darners, only two of them in North America.

Fawn Darners are a woodland dragonfly (and the BugLady is a sun-lover—just ask her dermatologist), living along the edges of shaded rivers, streams and windswept lakes in the eastern half of North America as far west as western Iowa. They fly at the end of the afternoon and at dusk, often until the bats come out, perching horizontally on vegetation or structures during the day.

A study of the insect life in acid mine waters in the coal country of Pennsylvania documented that Fawn Darner naiads can survive, at least for a while, in water with a pH as low as 2.5 (that’s in the vinegar/gastric juices range), though they may be more sensitive during ecdysis (final shedding and emerging as adults). They like more wholesome waters, too. Research in South Carolina by Worthen, Todd, Haney and Anderson found that “sites with Boyeria vinosa had significantly more crayfish, fish, and other Odonata, higher pH and dissolved oxygen, and less chloride than sites without B. vinosa.”

They have a very long flight season, appearing in mid-summer and tapering off in early fall. This timing isn’t that unusual in species whose emergence from the water is staggered, but Fawn Darners’ emergence is synchronized. Some of the clubtail dragonflies show synchronicity, as do hellgrammites, signaled by thunderstorms to leave the water. But this is the first darner the BugLady has read about that emerges with its “cohort.”

With slow, fluttery, erratic wingbeats, low over the water, males patrol the shoreline for females. They mate in trees and shrubs, but once mated, he does not contact guard her as she oviposits in wet, rotting wood or aquatic plants. Here’s a picture of a female ovipositing. She probes underwater with her abdomen to find the right spot and then gouges a hole with her sharp ovipositor. A video that shows why contact guarding is a good idea. Eggs laid at the end of the flight period will not hatch until spring, and many naiads probably spend two summers in the water.

Naiads hide under rocks and woody debris on the river bottom, and they feed on immature mayflies, caddisflies and midges. Adults have been called picky eaters – they scoop flying insects out of the air, but have been seen spitting out captured prey that was somehow not up-to-snuff.

The BugLady is always interested in “Who eats whom?,” and she found this wonderful note in the Dragonflies of Northern Virginia site: “The above photo is one of my favorite examples of how strange and twisted the lives of insects can be, and a funny instance of dumb luck on my part. I took this photo to get a close-up of the Fawn’s spots. I later realized I’d captured, quite by accident, three tiny parasitic wasps called Fairyflies (Mymaridae). Fairyflies (the smallest known insect), dive underwater, swimming with their legs and paddle-like wings, to find plants and debris where dragonflies have inserted their eggs. They then insert their eggs directly into the dragonfly eggs, and climb out of the water – adult wasps can stay underwater for 15 days as they search for eggs to parasitize! The tiny wasp larvae feed on, and pupate inside, the dragonfly egg, emerging underwater as winged adults from the now defunct dragonfly egg. The above wasps must be waiting for the female Fawn Darner to lay her eggs.”

Fawn Darners are famous for their curiosity. They will check every lump and tangle and bit of debris as they patrol the river bank. They will even, says Mead, in Dragonflies of the North Woods, check “the dragonfly enthusiast.”  Dennis Paulson, in Dragonflies and Damselflies of the East, adds that females are “Well known for landing on the legs of people wading in streams and attempting oviposition with predictable consequences, one source of myth that dragonflies sting.”