Fall webworms (FW) (Hyphantria cunea) belong in the Tiger moth family, Arctiidae, the same family as wooly bear caterpillars. FWs are found in North America from coast to coast and border to border. They are native sons and daughters that have, since WWII, spread through Europe and Asia. Look for them in parks, forest edges, and roadsides. Here in God’s country, there is only one generation per year; in Florida there are four, and in New Jersey, two. The moth that is laying eggs in the picture is white, which is typical of northern populations. Farther south, FW adults have variable black spots on their forewings. The adults are noticeably hairy (so are their voracious caterpillars) and may have yellow or orange spots on the front legs. 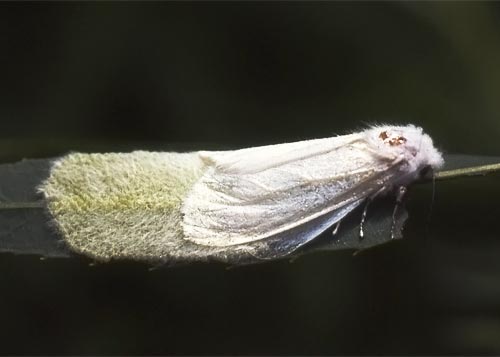 In her recent episode about Gypsy moths (7/6/10), the BugLady referred to the large, ragged webs of the FW that were being attributed to the blameless (in the web-spinning category, anyway) gypsy moth. Tent caterpillars also take the rap for webworm work, but tent caterpillars are gone from the scene by the time FW webs appear, and besides, the two have very different styles. Tent caterpillars spin webs in the forks and crotches of trees and shrubs in the rose family, like apple, cherry and hawthorn, and they are active in late spring and early summer. Their webs are residential properties–they shelter there but leave the tent to find food.

Female FWs lay clusters of eggs on the leaves of larval food plants in mid-summer, covering the eggs with a blanket of hairs from their own body. A week later the caterpillars emerge and, working by night, immediately set about creating their web. Their tents may be two or three feet long and enclose a whole branch. These all-purpose webs serve as both hearth and home, and when the caterpillars have skeletonized all of the leaves within it (eaten everything but the leaf veins), they will extend the web or build a fresh web on a fresh branch. Webworms feed communally for four or five weeks until their last molt, when they become anti-social, feed a bit more alone, and then pupate for the winter in a cocoon made of silk—and hairs from their body. The tough webs persist as tattered streamers for months after the caterpillars are done with them.

Cherry leaves are a favorite caterpillar food, but they will dine happily at quite a variety of trees including ash, willow, poplar, hickory, American elm, walnut, some maples, and a few fruit trees. A colony of caterpillars can eat lots of leaves, and they may defoliate part or all of a tree. 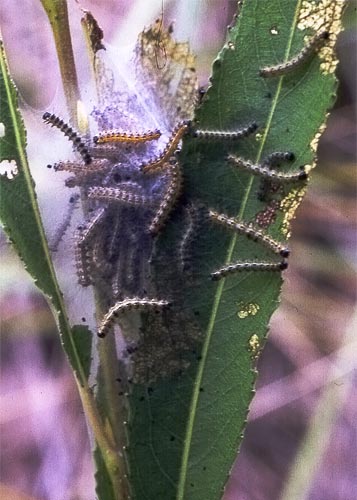 Surrounded by all that webbing, FW caterpillars must be predator-free, right? Wrong. Although FWs may have some dramatic outbreak years, in general their numbers are kept in check by a few kinds of birds like cuckoos and yellow warblers (fuzzy caterpillars are not everyone’s cup of tea) and by many kinds of fellow insects. One reference dubs them “a parasitoid hotel.” BugFans will recall from the Tachinid Fly episode that contrary to the mantra of parasites—“A good parasite doesn’t kill its host.”—parasitoids have no such qualms. They climb aboard their host during the parasitoid’s larval stage and start consuming it—from the inside-out, or vice versa—timing their metamorphosis to coincide with their host’s demise. Predatory wasps and flies also eat FW caterpillars and eggs, and some Vespula wasps pick caterpillars out from just below the outer layer of silk and carry them away to feed to their young. The protection offered by the web seems to fade as the caterpillars reach maturity. 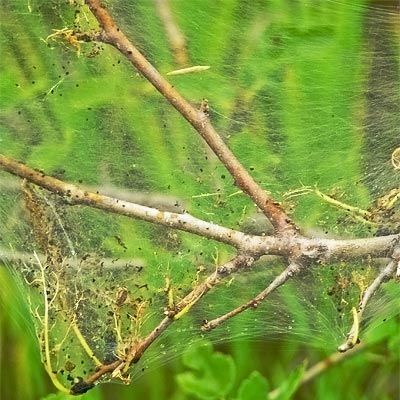 Like gypsy moth caterpillars, FW caterpillars do not generally kill healthy trees, even in outbreak years. In Wisconsin their feeding comes toward the end of the growing season, when leaves are almost done with their jobs of making food and sending it south into the tree’s roots. The issue is aesthetic—those unsightly feeding webs. Although suburban lawn-owners may object strenuously to webs on shade and ornamental trees, FWs are not considered a serious forestry pest. Trimming and disposing of any reachable, webby branches is the general advice. If you are chemically inclined, experts recommend early (mid-summer) spraying, restricted to the afflicted branches; later applications will damage the FW control team of predators, parasites, etc.

Donald W. Stokes, in A Guide to Observing Insect Lives, urges you to explore an abandoned FW web (if you peer into an occupied web, masses of alarmed caterpillars might wag at you in unison). He predicts that you will find abundant frass (that’s BugPoop) and exuviae (shed skins—from the Latin exure to take off), and maybe some leaves the caterpillars missed. Stokes says that “Over a quarter of the caterpillar’s life is spent in the process of shedding skins, or in quiet periods after shedding when its new skin is hardening.” You might also find some inert caterpillars that were victims of an ichneumon wasp that lays its eggs on the caterpillar.