While some may look to the robin to announce the arrival of spring, many wetland enthusiasts mark it by the appearance of that poster child of vernal ponds, the fairy shrimp. Neither insects nor insect-wannabes, the tiny fairy shrimp have some big names—they are Crustaceans (from the Latin crusta, hard or brittle external covering) in the subclass Phyllapoda (leaf-footed ones) in the order Anostraca (without a shield, a nod to the fact that they have no hard carapace). Their relatives include lobsters and shrimp as well as sowbugs and cyclops.

Fairy Shrimp are translucent; their color ranges from whitish through blue and green to orange and red, and color can vary within a species based on age and diet and the bacterial content of the water. In the Field Book of Ponds and Streams, Ann Haven Morgan notes that a fairy shrimp’s tail is often colored red with hemoglobin, and that its back is so transparent that it is possible to see the beating of its long, tubular heart. 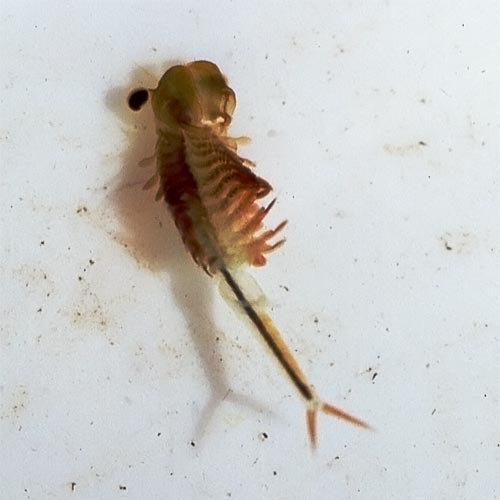 Tiny (three-quarter-inch) fairy shrimp move, belly up, through the world below the water’s surface. Eleven to 19 pairs of leaflike, multi-tasking “gill-feet” are found south of the head. These enable locomotion and breathing. Described as having “chewing bases,” the legs’ rhythmic movements also move/manipulate food (really tiny stuff like algae, diatoms, protozoans, bacteria, and detritus) toward the fairy shrimp’s mouth (fairy shrimp are, in turn, eaten by amphibians and by the larvae of predaceous diving beetles and caddisflies). They avoid becoming fish food because the vernal pools they inhabit are generally fish-free, and their populations peak before migrating birds can make a meal of them. Their relatives, the brine shrimp, are not so lucky and are eaten by flamingos and have been consumed by humans.

The “Elephant-Man”-like bulges below eyes of male fairy shrimp are mating organs—antennae modified into claspers. A female fairy shrimp (they vastly outnumber the males) carries eggs in a brood sac on the underside of her body. She releases from 10 to 250 eggs at a time every 2 to 6 days.

Thick-walled eggs, designed to weather both the seasonal drying of the pool and the cold of winter, wait in the litter of the pool’s floor. They can wait as long as two decades for favorable conditions to return, and they require drying and re-hydration before they can hatch. Some species may hatch as early as January if water is present and may be seen under the ice. 0ther species don’t hatch till May. Fairy shrimp populations may wax and wane in the same pool from year to year. 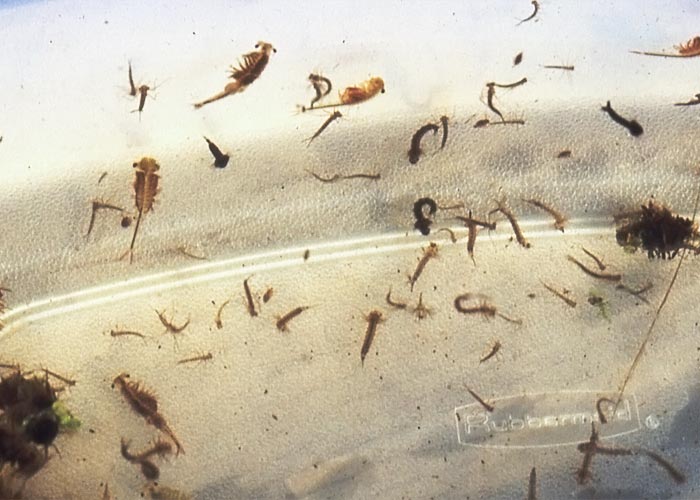 Sharp-eyed scrutinizers of the “Vernal Pond water” shot—or those who can enlarge it sufficiently—will see caddisfly cases, mosquito larvae (wigglers) and pupae (tumblers), fairy shrimp, damselfly nymphs, and others.

In the words of Dr. Mary Linton, wetlands ecologist. “Nothing kicks the slop out of a nasty case of Seasonal Affective Disease like the first fairy shrimp of spring.”