Today’s episode concerns two kinds of fly—both in the order Diptera (two wings)—at least part of whose lives are spent in “aromatic” places doing things most people don’t care to know about.

The BugLady has admired Greenbottle flies all her life (they’re pretty flies with a nifty name), but she didn’t realize until recently that they had such a… well, pungent… lifestyle. Greenbottle flies (Lucilia sp.) are members of the Blow fly family Calliphoridae, darlings of the CSI folks. Despite their name, they come in metallic blue and bronze as well as green. A few species are bloodsuckers and fewer still have larvae that are internal parasites of mammals. Most blow flies eat and breed on decaying matter, and a carcass draws a crowd. Eggs are laid on carrion or garbage; the larvae (maggots) mature in two to ten days and pupate in the soil. They are short-lived and there are multiple generations a year; the final generation overwinter as larvae in soil. Cousin Bluebottle fly (Cynomya cadaverina) is more attracted to fresh meat than the Greenbottle is. Greenbottles tend to stay outside residences, but they can be found near trash cans and meat processing plants. The problem is, of course, that you never know what those 6 feet have stood on before landing on your sandwich. 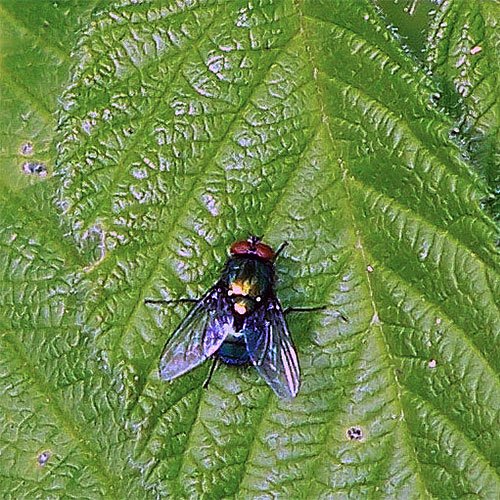 As TV watchers can attest, the life cycles of blowflies has been carefully scrutinized and timed by forensic entomologists, who can tell how old a corpse is by the age of its maggots. As veterinarians know, some blow flies are pests on livestock.

CAUTION – the following paragraph is not for the easily-woozy.

Just as leeches are enjoying a resurgence as physicians’ tools (mainly in reattachment surgeries, but other benefits are being documented), maggots of the Blow fly family have also found (or re-found) their way into medical practice. They do a dandy job of removing dead tissue (necrotic, to you wordaholics) at the edges of wounds. The maggots (disinfected for the occasion) do their thing, consuming only the dead tissue. As a bonus, their “secretions” contain compounds that help tissue to regenerate and scabs to form. Even better, the secretions of the some species are lethal to gram-positive bacteria, including the flesh-eating MRSA bacteria (makes sense, killing the competition). The procedure even has a name—biotherapy—and is used as a substitute for surgery and antibiotics in some cases. The only downside is the reaction of most patients, who invariably say, “YOU WANT TO DO WHAT!?” Happily for them, scientists are working to come up with synthetic fly “excretia/secretia.” 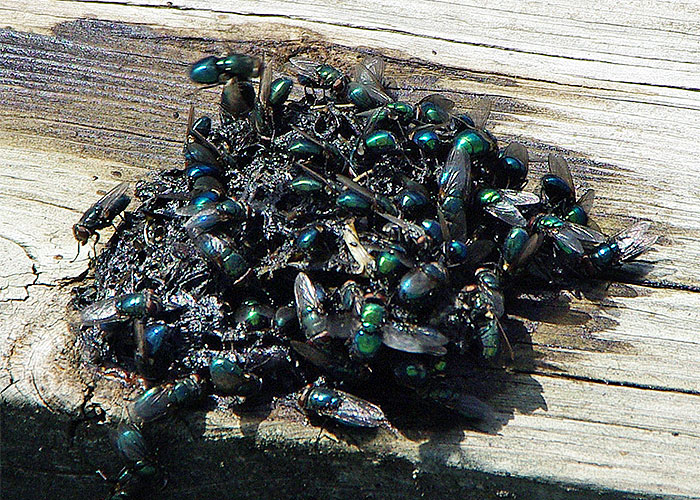 OK, you can look now.

Drone flies are in the family Syrphidae the Flower/Hover/Syrphid flies), but they look like the “old Elvis” version of the trim Flower flies. The sluggish adults are found on flowers of meadow and field, especially composites, eating nectar and pollen. Hairy and yellow-and-brown-striped, the adults are mimics of male honey bees (drones), but they lack the hourglass figure of a bee and its second set of wings. Flies have two wings; bees have four; the difference is not always easy to see. Adults emerge in late June and are gone before fall. 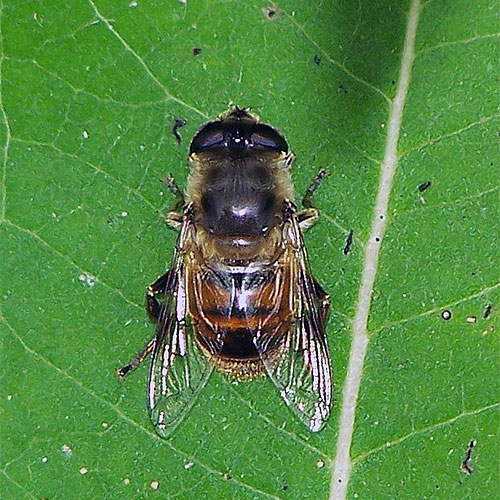 While many people (and predators) overlook the adults, their larvae are more familiar, especially to wetland enthusiasts. These are the “rat-tailed maggots” whose name comes from the long, telescoping breathing tube/“snorkel” that extends from the tip of their abdomen. Eggs are laid in crevices near stagnant, often polluted, water that contains lots of decaying organic matter (including sewerage treatment ponds). The aquatic Drone fly larvae (the larvae of most Syrphids are terrestrial) scavenge on organic material and can also be found on “wet carrion” or open latrines. Larvae are reputed to be responsible for some intestinal diseases of people, but this is under debate by the Health People. Trust the BugLady – you don’t want to know the details. According to Wikipedia, rat-tailed maggots are sold as fishing bait under the pseudonym “mousies.”

There are old myths, cited by some of the big names in classical writing (the Bible, Ovid, Virgil and Solomon) about spontaneous generation and about bees growing from dead animals. This is one of the species responsible for those tales.