The BugLady has trouble wrapping her head around the idea of a non-native butterfly, especially one that’s considered a pest. What could be more benign than a butterfly? But, there’s the non-native Cabbage White butterfly (there’s even an alien orchid that’s considered invasive in some areas – read this for more about that). Of course, when butterflies are listed as a pest species, it’s because of the dining habits of their caterpillars. 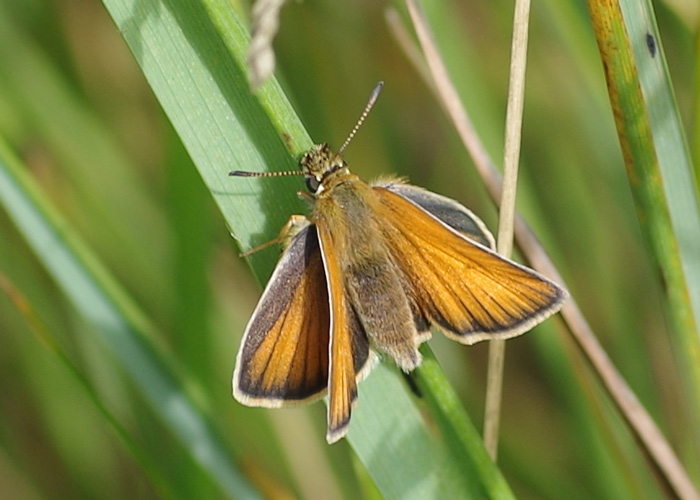 European Skippers (Thymelicus lineola) fetched up on these shores (London, Ontario, to be exact) in 1910 – one source speculated that the eggs were carried in the seed heads of the also-alien timothy grass, possibly in dried grass that was being used, pre-“plastic peanuts,” to cushion a shipment of ceramics (a common practice in by-gone days and one that brought other alien grasses from the Old Country). The ES has been expanding its range ever since, both under its own power and as eggs transported in hay (in a study of hay bales, researchers found more than 5,000 ES eggs in a single bale of timothy hay, and another source referenced a range map for ESs and said that if it was more than two years old, it was out of date). 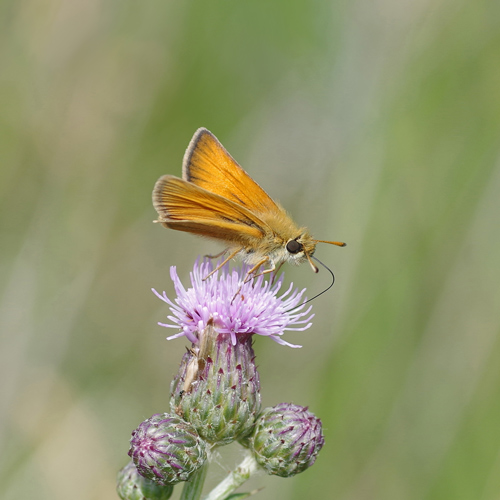 They are a “cool-climate” butterfly that ranges across Canada and the northern tier of states (largely skipping the Great Plains), and throughout the Northeast, and they’re found in all sorts of grasslands, plus parks, gardens, roadsides, and wetland edges. They are common within that range, sometimes mind-bogglingly so. According to the wisconsinbutterflies.org website (https://wisconsinbutterflies.org/butterfly):

“This species is most impressive for its occasional abundance, far greater than that of other skippers in the northern states. The record high for this species on a single North American Butterfly Association count is 55,340 and every year the highest count is well into the thousands.” Bugguide.net says that “It is becoming the most common skipper and considered a threat to Polites peckius.” [Peck’s skipper].

European Skippers are in the Skipper family Hesperiidae and in the Grass skipper subfamily Hesperiinae. Adult Grass skippers tend to perch on flowers with their wings slightly “ajar” – the forewings held closer together than the hind wings (which can make seeing the color patterns tricky) – and the host plants of their caterpillars are mostly grasses and sedges. The caterpillars may web a few grass leaves together as a shelter and feed nocturnally. On the other side of the Pond, European Skippers are called Essex Skippers. 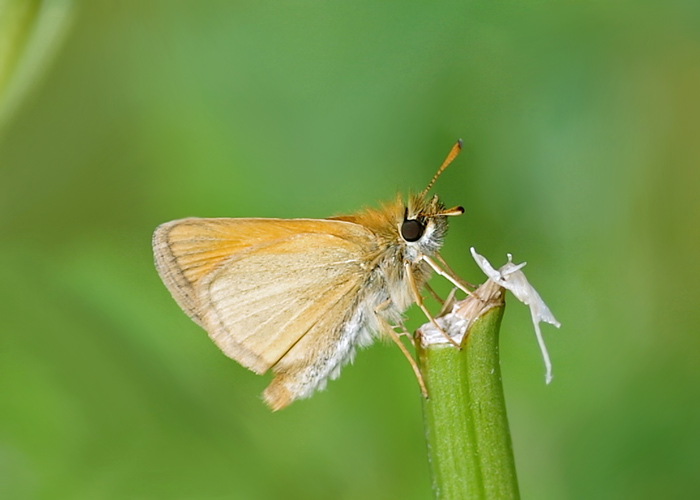 They’re a smallish butterfly with a wingspread of 1 to 1 ½ inches and the typical chubby, hairy body of a skipper. Like many grass skippers, they are orange and brown, but orange (one site describes it as “pumpkin orange”) predominates both on the upper and lower surfaces of the ES’s wings.

ES caterpillars eat timothy grass and, to a lesser extent, a few other exotic grasses. Timothy, a sun-loving grass whose seed heads look like mini-cattails, came over on the boat from England, too, probably before 1700, as a contaminant in other plant materials. The settlers here recognized it as a good livestock food and started cultivating it (England caught on later), and it continues to be important horse and cattle fodder today (it’s also sold as food for pet rabbits and rodents). It’s named after a farmer named Timothy Hanson, who played Johnny Appleseed by spreading the grass from New England to the mid-Atlantic coast by 1747. It’s sometimes planted as a soil holder in road construction.

The caterpillar damages timothy grass by its feeding, sometimes stripping the leaves of a plant, and when a lot of caterpillars are present, by eating the seed head, too, leaving a bare stalk. According to a slightly-dated entry on the Canadian Biodiversity Information website, “Even after almost a century it seems that native parasites have not yet developed a ‘taste’ for this species” (although a naturally-occurring virus can be lethal to them and is being considered where caterpillar control is needed). Adults nectar during the day on a variety of composites (fleabane, thistle), clovers and other mid-summer wildflowers. 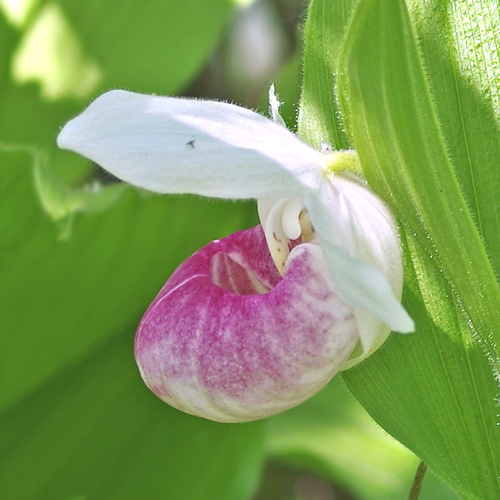 Males patrol, close to the ground, searching for mates. Females lay as many as 30 pale green eggs, in strands of three or four each, on grass leaves or seed heads. Alone among all of the 275 species of North American skippers, ES’s overwinter as eggs, and the caterpillars emerge in spring. Here’s a caterpillar, and here’s a pupa.

Adults tend to sit out very hot or cloudy weather, and they spend the night perched down in the grass. 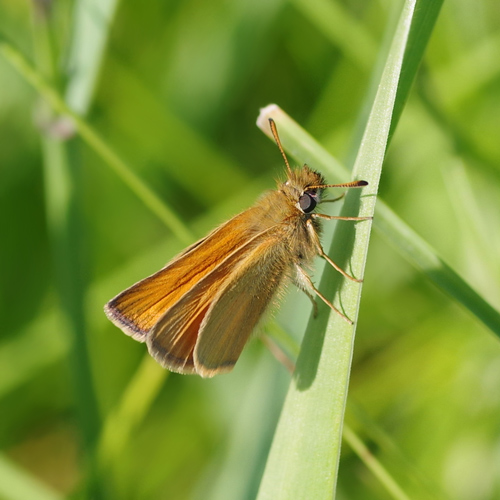 Speaking of orchids, the BugLady found an interesting paper about the effects that foraging ESs have on seed production in the spectacular Showy Lady’s-slipper orchid. Orchids are famous for the tricks they play on potential pollinators and the hoops they put them through. A number of orchids are pollinated by “naïve bumblebees” (a term that tickles the BugLady). The orchids advertise their flowers by odor or color; the bees enter, and they find no nectar reward, but they leave bearing pollen. It takes a few unrewarding visits before an individual figures it out and moves on to more rewarding flower species, but there are always more naïve bumblebees out there.

In the case of Showy lady’s slippers, pollinators are lured into the slipper and are trapped in it because the tissue around the lip’s opening is folded into the flower. The only way out requires them to squeeze past hairy structures that first relieve them of any pollen they are carrying and then deposit new pollen on them before they reach the narrow exit – with no nectar for their efforts.

In one study, the majority of Showy lady’s slipper flowers in a study bog in Ontario contained one or more dead ESs, which can’t escape by the normal routes (one flower held seven!). Males outnumbered females, because male ESs emerge from their chrysalis earlier than females. Once an ES gets into the flower, pollination by the normal pollinators – leaf-cutter bees, syrphid flies, and a few small beetles – becomes difficult-to-impossible and seed production plummets. If the ES can’t escape, like the naïve bumblebees, it can’t learn to bypass the orchid.

So – rising populations of ES have the potential to impact Showy Lady’s slipper populations.