The BugLady loves finding these runes, inscribed by long-departed insects (they are also reminiscent of a diagram of meiosis from the BugLady’s past). The tale that they tell is one of lust and fertility and survival (OK—a little florid, but it’s snowing. Again). Turns out that there was much more to the story of the European elm bark borer than first meets the eye. Put your feet up—it’s an epic tale.

There are a number of beetle families whose larvae burrow beneath the bark. The offspring of the prominent and showy Buprestids (metallic wood borers like the infamous Emerald ash borer) and Cerambycids (Long-horned beetles) are borers. Bark beetles, in the weevil family Curculionidae, are small and seldom noticed, and they tunnel as both adults and larvae.

Older books and internet sites list them in their own family, Scolytidae, but with the constant review and reshuffling that is scientific taxonomy, they are now grouped with the weevils. Their subfamily, Scolytinae, gives a nod to their former classification. There are about 6,000 species of Scolytini worldwide; 525 in North America. They look a lot alike, and one way to narrow down the species is by noting the type of tree, the location of larval feeding, and the shape of the larval galleries (tunnels) (Scolytinae also includes a group called the Ambrosia beetles, who plant fungal spores in their tunnels and then eat the plant tissue that is softened by the growing fungi. The larvae of European elm bark beetles tunnel, but they do not farm).

There are a number of serious pests, both native and introduced, within the Scolytinae, like the several species of extremely worrisome pine beetles that are impacting trees in western and southeastern North America. The European elm bark borer (Scolytus multistriatus), a.k.a the Dutch elm weevil, a.k.a. the Smaller European elm bark beetle, is an alien that was first observed in the U.S. in 1909, though it undoubtedly arrived earlier. Surveys in 1933 found the beetles clustered around the seaports of Boston, New York City, and Philadelphia. Look for them today across the U.S., north into Canada and south into Central America, wherever elms grow. Look sharp, because they’re tiny—only 2 or 3 mm long (1/8 inch) long.

For EEBBs, feeding and breeding are interwoven. Long story short—newly-emerged adults seek food, preferring to feed in the top half of healthy elms in a twig crotch, at the twig-leaf connection (axil), and sometimes on the buds. When they are sated (or when, as one source implied, they have seen enough of the sun), they look for a cut, diseased or compromised elm. The female EEBB burrows under the bark and creates a long (up to four inches), straight tunnel parallel to the grain of the wood (in one of the BugLady’s pictures, Mom’s tunnel curved when she encountered the tough wood of a knot). A widened cup at one end serves as a mating chamber.

At intervals along the sides of her tunnel she carves little alcoves, each a repository for an egg, and when she is finished ovipositing, she remains in the tunnel to protect her young and keep the tunnel clean (her offspring aren’t as tidy, and their tunnels are packed with frass (bug poop)). When the eggs hatch, the larvae chew outwards “with the grain,” at right angles to the maternal gallery, eating their way through the living vascular tissue (cambium and phloem) under the bark. Unless population densities are high, larval tunnels don’t intersect, and as a larva fattens, so does the circumference of its tunnel. It will pupate in the outer bark at the far end of its excavation. There may be several generations in a summer, and the fall larvae overwinter under the bark as larvae, to metamorphose when elm leaves appear in spring. When a cohort of adult EEBBs emerge, they leave the bark with a “birdshot” appearance. 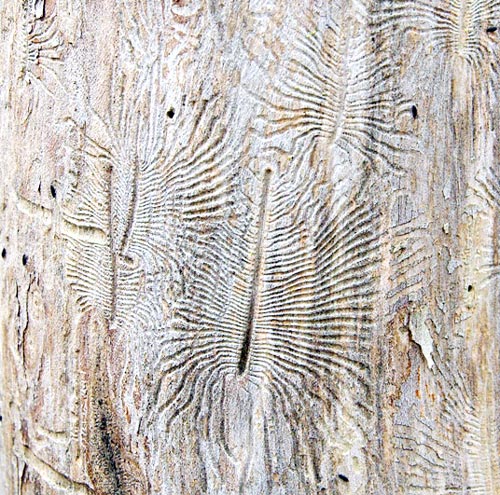 Ah, but the devil’s in the details, and the escapades of the adults are a testament to Better Living through Chemistry [side note—check out the etymology/origins of the saying “the devil’s in the details” in Wikipedia]. Hungry adults may locate healthy elms via the elm’s airborne scent, or they may have to land on the tree to “scratch and sniff.” Receptors on their antennae allow them to “smell.” These tree odors act as feeding stimulants, and as the beetle chews on the twig, more elm “volatiles” are released and more beetles come.

The EEBB locates its brood tree in the same way. Damaged elms give off a number of chemicals, one of which is similar to vanilla and another that smells like “sweet and spicy apples.” As they excavate their brood tunnels, virgin female EEBBs release “aggregation pheromones” (airborne chemical attractants) at the entrance to the breeding chamber that invite both sexes to the party (even her frass is scented). The brood tree ends up as a beetle mecca (EEBBS prefer trees that have other EEBBS in them), which results in more egg-laying (a “breeding attack”), which wears down the tree’s defenses. There’s a tiny, parasitic wasp that follows its nose to the EEBBs, too. Pheromone traps offer a way to control EEBBs.

This tunneling by EEBBs damages their (already ailing) host trees mechanically because the centipede-shaped galleries of the larvae interrupt the transport of nutrients throughout the tree, but EEBBs pack a one-two punch. The first recorded case of Dutch Elm Disease (DED) in the United States was recorded in 1928, and in 1937, a report from the Massachusetts Agricultural Experiment Station states that the EEBB is “now considered to be the most important insect carrier concerned in the spread of the causal fungus [for Dutch elm disease] in the United States.” DED first appeared in Europe (in a significantly milder form) in 1910, and having made landfall here in the late 1920’s, it arrived in Chicago and St. Paul by 1960 and California by 1973.

Dutch elm disease in the U.S. is caused by two fungi, Ophiostoma ulmi and Ophiostoma novo-ulmi, and it’s transmitted by the EEBB, by a native elm bark beetle and by the alien Asian/Banded BB, a 2003 arrival that’s in the same genus as the EEBB. If the dead or dying tree chosen by Mom for the natal chamber was infected with the Dutch Elm Disease (DED) fungus, the new adults will be coated with spores when they emerge and may also have spores in their guts. They will inoculate both the healthy trees they feed on and the trees they lay eggs in. Because of differences in the phloem tubes over the growing season, elms are more susceptible to DED at the beginning of summer, when the first brood of EEBBs appears. Ironically, damage from DED occurs when the tree plugs its own xylem/water-transport tubes in an effort to isolate the fungus.

The BugLady found a study in which Webber, et al. demonstrated that in the early stages of their lives, EEBB larvae can’t tolerate the DED fungus (and possibly other kinds of fungi, either); if they are surrounded by fungus-infested tissue, they don’t make galleries. Older larvae can eat fungi with impunity. There is, apparently, a window on the usefulness of a declining elm.

Are trees helpless against the beetles? Plants often mount a defense against their attackers by producing insecticidal/fungicidal/nasty-tasting/toxic substances, thorns, or sticky sap. When it comes to EEBBs, not all elms are created equal. The BugLady read one account of a Chinese elm that thwarted the beetles with its gluey sap. The fungus transmitted by beetles may be their counterattack against the trees’ defenses, and more distressed an elm becomes, the more nursery trees are produced.

And then there’s the phoresy. The BugLady is always blown away when she comes across examples of phoresy (benevolent hitchhiking), a stunning indication of how profoundly complicated things are in Nature. In a European study, both mites and nematodes (roundworms) were discovered in EEBB galleries (nematodes are found everywhere in Nature), and mite associations have also been observed with American EEBBs, as early as the 1930’s.

Although their ecological roles are unknown, scientists hypothesize that the mites move with the adult EEBBs from their natal tree to the tree where eggs will be laid. When they hop off of their transport, mites spread fungal spores in their new location.

The BugLady recommends A Guide to Nature in Winter by Donald W. Stokes, and Tracks and Signs of Insects and other Invertebrates by Eiseman and Charney. Both will help BugFans make sense of the clues that insects leave behind.

FYI, the internet rhyming site was stumped when it came to a rhyme for Scolytus multistriatus. Go figure! Hiatus?