The BugLady has been hanging out at her local ephemeral pond again, looking at small things in the water. She loves the cycles of ephemeral ponds and the critters they contain (they’re also called vernal/spring ponds, but because some hold water in fall instead of spring, “ephemeral” is a more inclusive term). Ephemeral ponds are (most years) just that—ephemeral. These are here-today-and-gone-tomorrow ponds, gather-ye-rosebuds-while-ye-may wetlands. The wonder of EPs is that they are populated by animals that take the disappearing water in stride—animals that are prepared to dry up with the pond or to get out of Dodge (timing IS everything), and therein lie many tales.

An astonishing array of animals use EPs as a place to drink, hunt, and breed, but an EP is a challenging place to call home. The still, shallow water warms quickly and contains little oxygen. As the water evaporates, its inhabitants squeeze into increasingly smaller spaces; water quality declines as waste products, including carbon dioxide, increase; and food gets harder to find. The annual drought makes EPs unsuitable for fish, which wreak havoc if they do find their way into an EP from nearby waterways in flood time. Do EP animals live there because they’ve developed adaptations that let them survive drought, or do they live there because the EP’s cycles give them something they need—a dry period? Yes.

Not every puddle that disappears seasonally is an Ephemeral Pond; the presence of certain indicator species verifies its status. Wood frogs, blue-spotted salamanders and fairy shrimp are considered obligate EP species in Wisconsin, and finding empty caddis fly cases or encysted fairy shrimp eggs in the leaf litter of a dry depression in fall also identifies it as an EP. For information about EPs and an Ephemeral Pond Citizen Science monitoring project.

Many citizens of the EP—like damselflies, snails, marsh treaders, daphnia, water sowbugs, phantom midges, scuds, and soldier flies—are not pictured in this episode but have been featured in these pages previously and are archived. Others may star in their own episodes someday soon. Here are some of this spring’s crop, including a few “newborns.” Remember, the BugLady’s working definition of “bug” is rather catholic.

EPs are magnets for breeding amphibians, which must lay their soft eggs in water. Their Tadpoles mature fast, so they can hop away when the pond disappears (these are “land frogs” as adults). Two species of Wisconsin frog (Green and Bull frogs) do not lay eggs in EPs; their tadpoles take two summers to mature and so need permanent water. 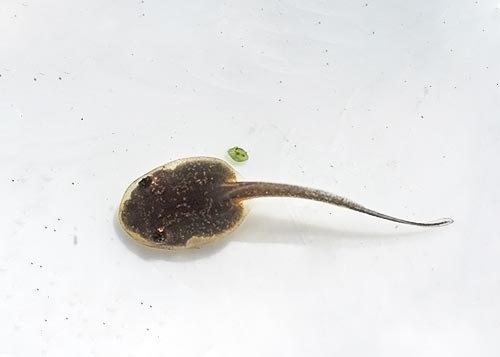 The aptly-named Bloodworm is a fly larva, one of the midges. Many midge larvae live in low oxygen habitats; their color comes from a hemoglobin-like pigment that helps them hang onto oxygen. 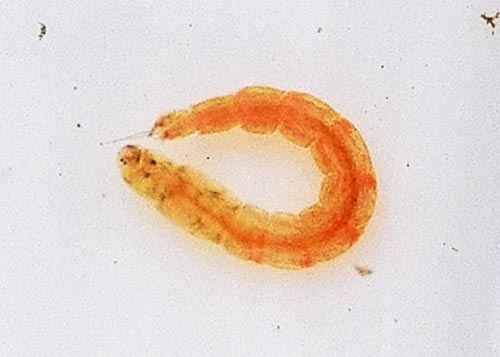 The young of some Dragonfly species develop quickly from eggs laid when adults visit the ponds in spring, their rate of development “goosed” by the warming water temperatures. They become adults before their pond disappears. Other dragonfly (and damselfly) species lay eggs in summer or fall—eggs that go through a period of diapause (suspended animation) when they dry out and that restart when the pond fills again. 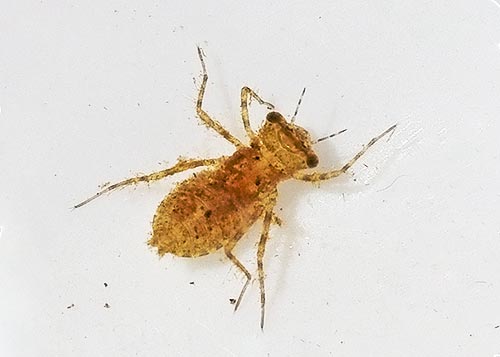 Mayflies are famous for appearing in uncountable numbers, causing people in some river towns to call out the snowplows. This empty exoskeleton was left behind by a mayfly on its way to adulthood. Their eggs enter diapause to avoid dry conditions. 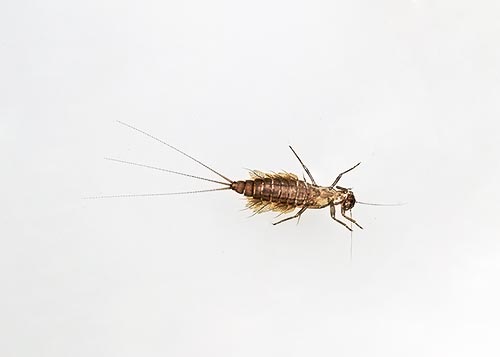 Mosquito larvae (“wigglers”) are food for a host of carnivorous aquatic insects and for larval salamanders. The BugLady read that some species of mosquito lay eggs on damp mud near the pond’s edge—these enter diapause and can be dormant for years until the water rises again.

Larvae of Predaceous Diving Beetles are rightly called Water Tigers. They both grab their prey and inject enzymes through their sickle-shaped mandibles. They eat lots of mosquito wigglers and will even take on tadpoles. 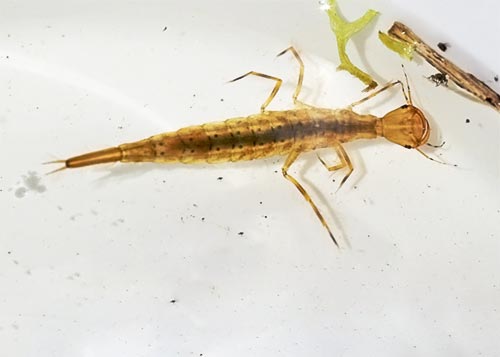 Adult Predaceous Diving Beetles continue their offspring’s carnivorous ways. They are found in permanent ponds, but may overwinter within the mud and litter of the dry EP.

The BugLady loves the fierce Giant Water Bug (Handle with Care), and not just because the male of the species is caregiver for the eggs that his lady glues onto his back. Its strategy for drought is to find permanent waters until EP opens up next spring. Note the red blobs on the edge of its exoskeleton, near the legs. These are Water Mites, whose nymphs are parasites on their aquatic brethren. 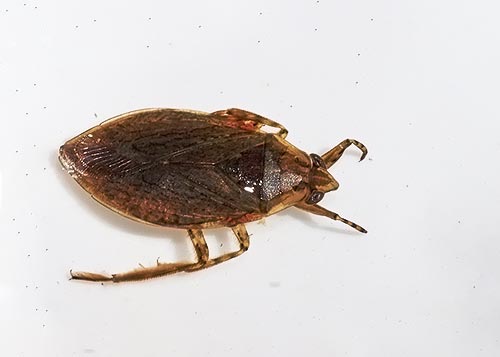 Caddisflies creep around the vegetation of the EP wearing shelters they make from silk and from the materials at hand. Some species are herbivores that, while feeding, break down large pieces of vegetation into bits that smaller critters can eat. Others are carnivores—the BugLady read of one species that feeds on larval salamander embryos from un-hatched egg masses. Their eggs overwinter. 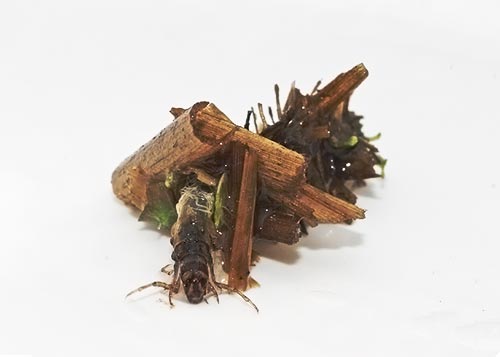 Planeria are flatworms and are not related to earthworms or leeches (which are related to each other). Most scrounge bacteria, algae, and dead stuff from the pond floor. They get through the winter as eggs, and the adults of some species can encyst themselves. 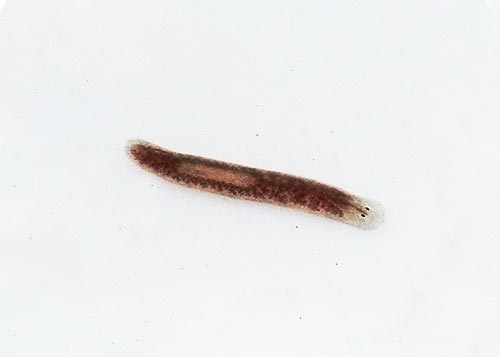 Fairy Shrimp like this gravid female were scarce in the EP this year due to some outlaw stickleback fish that entered the pond last summer. Fairy shrimp eggs have a thick shell that protects them from desiccation. They can withstand years of drought and must be dried and re-hydrated in order to hatch. 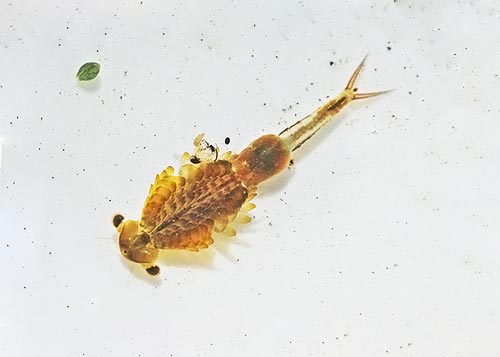 These tiny guys, which are either Seed Shrimp/Ostracide or ClamShrimp, do look like seeds and clams, but they are both Crustaceans, (very) distantly related to crayfish. Most are well under ¼” in length, which means they are targeted by many of the EPs predators. The eggs of both are drought-resistant. 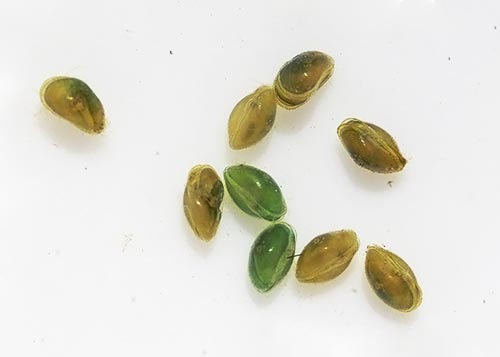 This is the tiniest Water Boatman the BugLady has ever seen, she slurped it up with an eyedropper. Some water boatmen may leave the EP in summer (they’re good fliers) to spend the winter in permanent ponds and repopulate the EP in spring. Others may dig down in the mud and wait for the snow to melt. 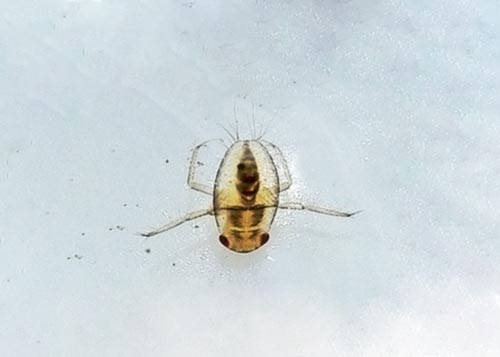 Elegant and predatory Water Scorpions spend the winter in nearby permanent waters and move into EPs when the water warms in spring. 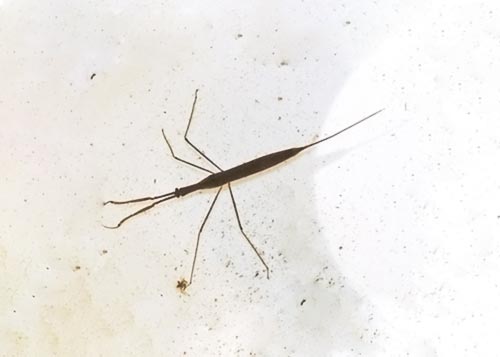 The oh-so-difficult to photograph Crawling Water Beetle is found in EPs and permanent waters. Some species overwinter as adults. Others as larvae that leave the water and dig into damp soil at a pond’s edge. 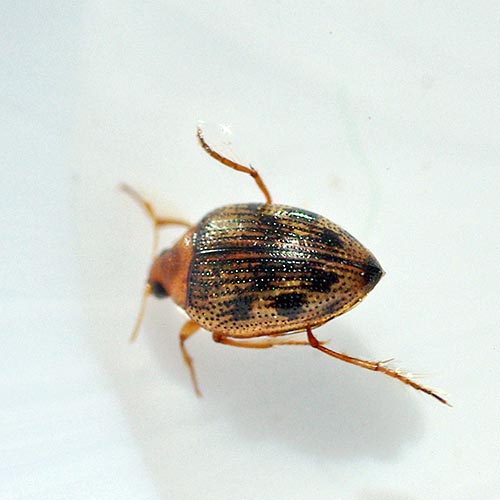 While their tadpole cousins are herbivores, gilled Larval Salamanders are major predators in the EP. They consume many small invertebrates, and the species of salamanders that hatch first will prey on their later-emerging cousins. Breeding salamanders are among the first to leave the land and enter the EP in spring, often when there is still ice around the edges of the pool. 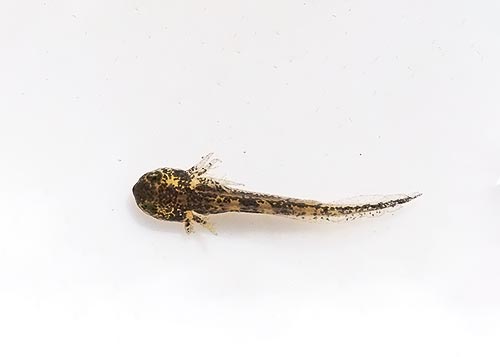 The BugLady recommends the nifty booklet A Guide to the Animals of Vernal Ponds by Kenney and Burne, Massachusetts Division of Fisheries and Wildlife.

A Duskywing and a Cloudywing (Family Hesperiidae)