The BugLady has been hanging out at the ephemeral pond again; what follows is a revision of a BOTW from 2012 (different pictures, somewhat different cast of characters). By now, many of these critters have whole BOTWs of their own at the Field Station’s Bug of the Week blog.

She celebrated Easter at the Church of the Ephemeral Pond this year—a choir of peepers, wood frogs, and leopard frogs gave witness that there were, indeed, Easter eggs, but the BugLady didn’t see any. In past years, Belted Kingfishers have gathered at the pond to enjoy the frog spectacle, too, but they’re a bit late this year, or maybe the pond is early.

Ephemeral ponds are (most years) just that—ephemeral (they’re also called vernal or spring ponds, but because some hold water in fall instead of spring, “ephemeral” is a more inclusive term). These are the here-today-gone-tomorrow ponds, the gather-ye-rosebuds-while-ye-may wetlands. The wonder of ephemeral pools is that they are populated by animals that take this annual disappearing act in stride—animals that are prepared to dry up with the pond or to get out of Dodge (timing is everything), and therein lie many tales.

An astonishing array of animals use ephemeral ponds as a place to drink, hunt, and breed, but an ephemeral pond is a challenging place to call home. The still, shallow water warms quickly (which encourages speedy metamorphoses) but contains little oxygen. As the water evaporates, its inhabitants squeeze into increasingly smaller spaces; water quality declines as waste products, including carbon dioxide, increase; and food gets harder to find. The handwriting is on the wall. The annual drought makes these ponds unsuitable for fish, which wreak havoc if they find their way in from nearby waterways in flood time. Do animals live there because they’ve developed adaptations that let them survive drought, or do they live there because the pond’s cycles give them something they need – a dry period?

Not every puddle that disappears seasonally is an ephemeral pond; the presence of certain indicator species verifies its status. Wood frogs, blue-spotted salamanders and fairy shrimp are considered obligate species (direct indicators) in Wisconsin, and finding empty caddis fly cases or encysted fairy shrimp eggs in the leaf litter of a dry depression in fall also identifies an ephemeral pond. A massive Citizen Science project to identify and census ephemeral ponds in southeastern Wisconsin is written up in the DNR publication: Accuracy Assessment of Ephemeral Pond Wetlands Mapping in
Southeastern Wisconsin: Wisconsin Ephemeral Ponds Project (WEPP).

The BugLady photographed ovipositing (migrant) common green darners across a crowded pond on Easter, but they’re not the only dragonfly species that will use it, and damselflies do, too. Some young Odonates hatch and develop quickly, “goosed” by the warming water temperatures, and they emerge as adults before their pond disappears. Other dragonfly and damselfly species lay eggs in summer or fall, and their eggs go through a period of diapause (suspended animation), restarting when the pond fills again. 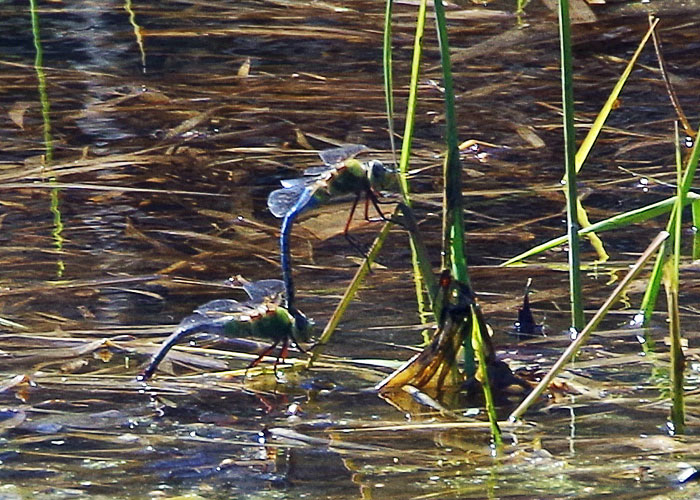 Mosquito larvae feed by filtering tiny stuff (bacteria, protozoa, algae) out of the water, and they are food for a host of carnivorous aquatic insects and for larval salamanders. The very-active larvae are called “wigglers;” the also-active pupae are called “tumblers.” The BugLady read that some species of mosquitoes lay eggs on damp mud near the pond’s edge—these enter diapause and can be dormant for years until the water rises again. 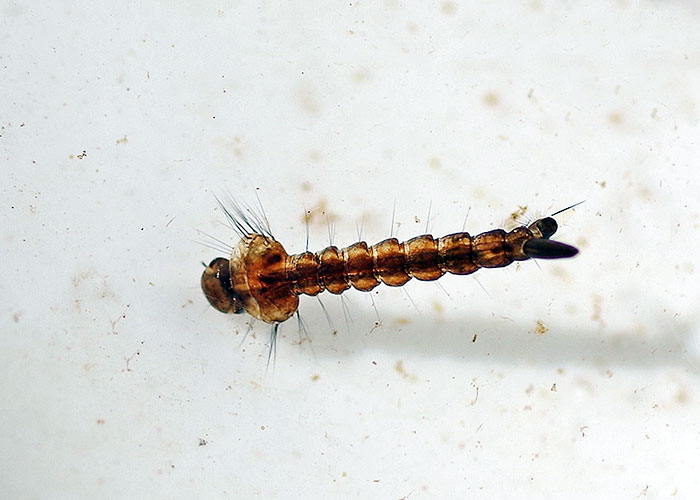 Water Tigers (a BugLady favorite) are the larvae of Predaceous diving beetles (family Dytiscidae), and their name is richly deserved. They grab their prey (lots of mosquito wigglers, fairy shrimp, and the odd tadpole) and inject meat-tenderizing enzymes through their sickle-shaped mandibles. Although they are aquatic as both larvae and adults, the winged adults can escape to a wetter spot when the ephemeral pond dries, but they may also overwinter in the mud and litter of the dry pool. This one shared the plastic spoon with a daphnia. 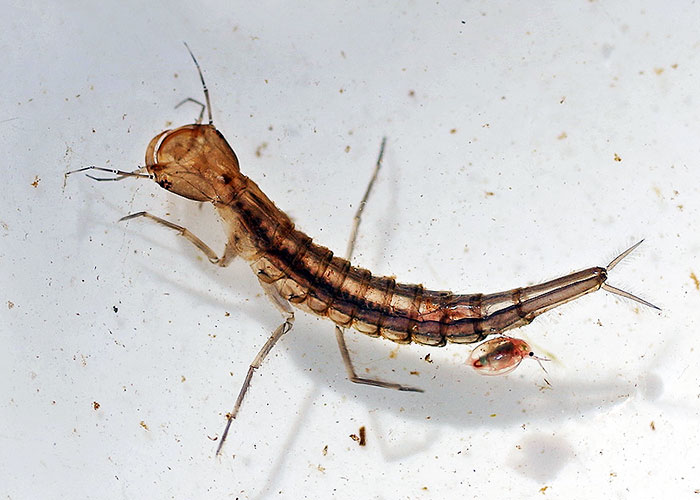 The BugLady loves these bugs (the front end is very sharp—handle with care), and not just because the male is caregiver for the eggs that his lady glues onto his back. Its strategy for drought is to find permanent waters until the ephemeral pond opens up for business next spring. In the low oxygen of the ephemeral pond, he rocks his body back and forth, sloshing water on the eggs and keeping them wet and oxygenated. 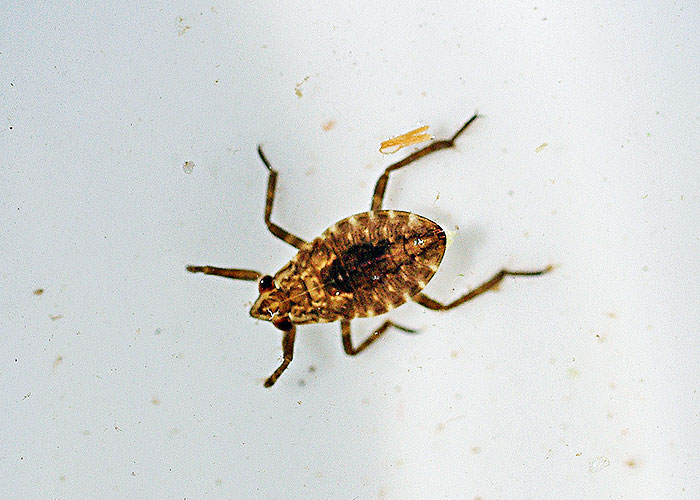 Water mites are a diverse bunch both in appearance and habit. Many nymphs (and some adults) are predators or parasites of aquatic insects, and they are commonly seen on dragonflies and damselflies. They move by scrambling through the water, and they can survive in low oxygen concentrations. 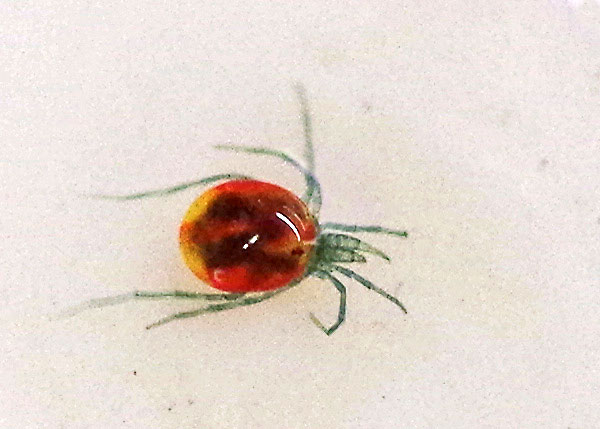 Caddisflies creep around the vegetation of the pond wearing shelters made of bits of plants that they fasten together using homemade silk. Some species are herbivores that, while feeding, break down large pieces of plant material into smaller ones that smaller critters can eat. Others are carnivores—the BugLady read of one species that feeds on larval salamander embryos from un-hatched egg masses. Their eggs overwinter. 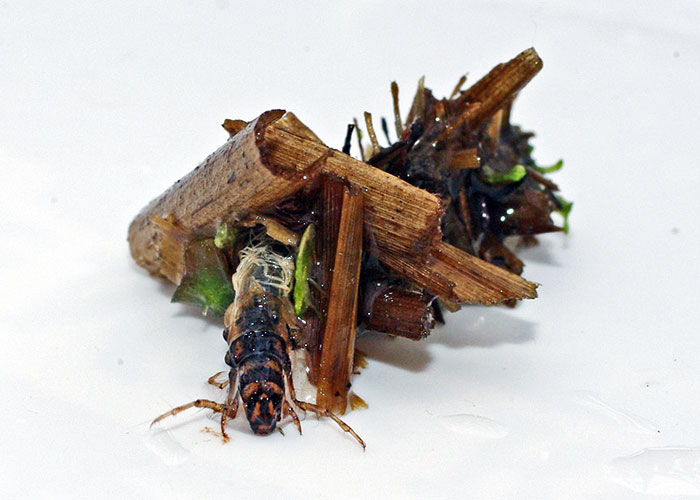 Planeria, flatworms, are not related to leeches, which they somewhat resemble. Most scrounge bacteria, algae, and dead stuff from the pond floor, ingesting it through a ventral siphon. They get through the winter as eggs, and the adults of some species can encyst themselves. These dazzling green planeria are ephemeral pond specialists that carry around a bunch of photosynthesizing algae in their tissues. The planaria get oxygen and some sugars from the deal; the algae gets shelter and carbon dioxide. 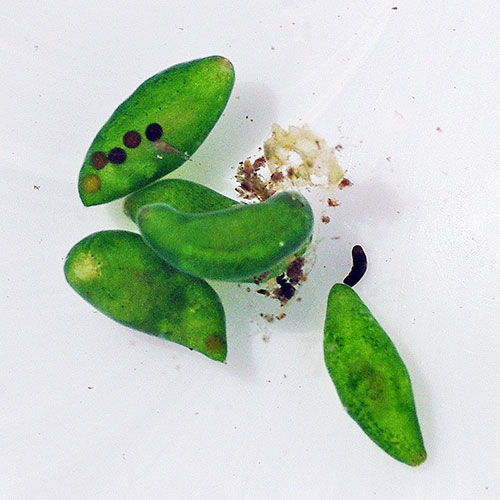 In the early days of the pond, females produce soft-shelled “summer” eggs (some fertile, some infertile but parthenogenic that hatch into more females). If you zoom in on the female, you can see eggs. The summer eggs hatch quickly. As the pond winds down, they form “winter eggs” that have a thick shell that protects them from desiccation and that can withstand years of drought (up to 15 years), and that must be dried and re-hydrated in order to hatch. Maybe 3/8 of an inch long, the male has claspers on his “face” and the female’s face is hammerhead shark-shaped.

These tiny guys, which are either Seed Shrimp or Clam Shrimp (the BugLady isn’t sure which) do look like seeds and clams, but they are Crustaceans, (very) distantly related to crayfish. Most are well under ¼” in length, which means they are targeted by many of the pool’s predators. The eggs of both are drought-resistant.

Daphnia are another BugLady favorite, partly because she can’t believe that she can actually photograph them. These tiny Crustaceans eat minute bits of algae, bacteria, and debris, and everybody eats them. Their jerky progress through the water gives them an alternate name—water flea. They overwinter as drought-resistant eggs. Daphnia eggs hatch within the female’s brood chamber and are released when she molts, and the BugLady is wondering if this shot captures a few young daphnia within the brood chamber. 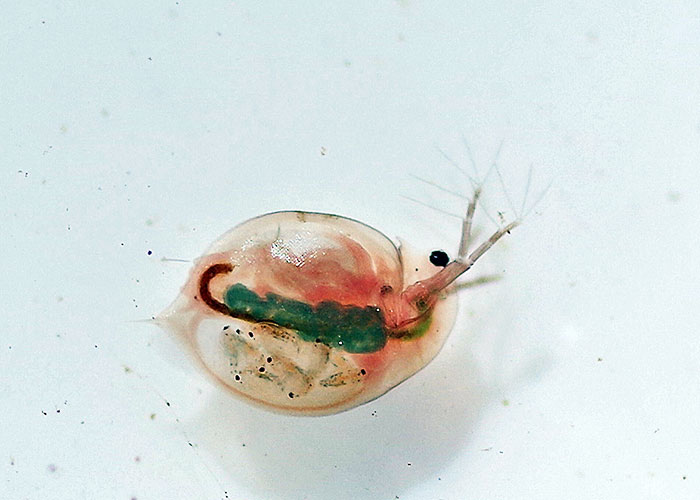 Phantom Midge Larva – a predaceous (sometimes omnivorous) larva that floats through the water column like a tiny dirigible, its paired air sacs fore and aft revealing its presence. Its stillness and transparency afford it camouflage; it grabs its prey with specially adapted antennae. It’s on the menu of larval salamanders and other predators. 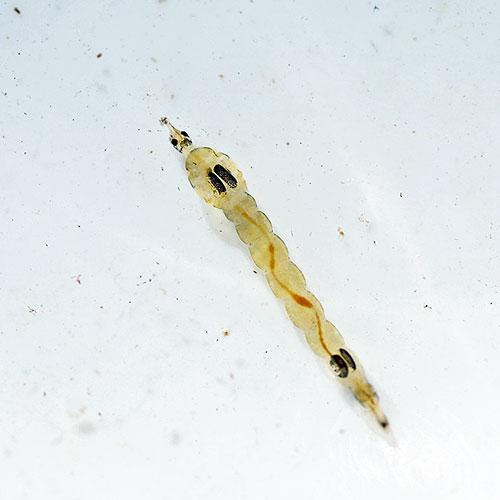 Yes, related to the guys that peer up at you when you pick up a flowerpot in the summer. They don’t swim, exactly, but they paddle-walk slowly along on the pond bottom, feeding on detritus that they find along the way. Their young hatch from eggs within the female’s pouch, and they don’t have any special adaptations to survive the drought. 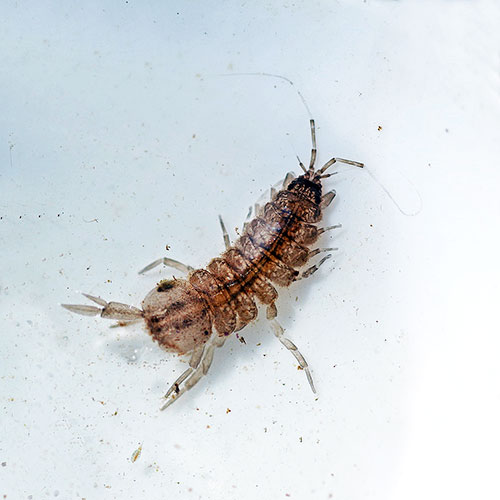 Scuds – these amphipods scoot around the pool (or the BugLady’s plastic spoon) on their sides, demonstrating their alternate name “sideswimmer.” In a fish-free habitat, they can be plentiful. Like water sowbugs, they are omnivore-detritivores, chewing on organic detritus while they hold onto it with their front legs. When the water dries up, they bury themselves in the mud. 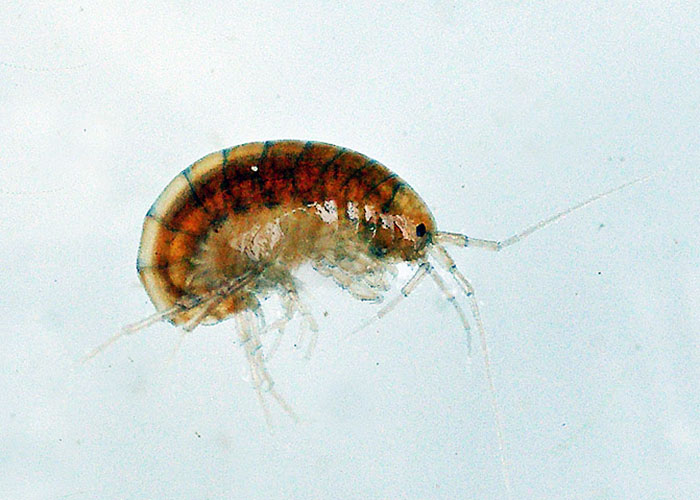 The BugLady recommends the nifty booklet A Guide to the Animals of Vernal Ponds by Kenney and Burne, Massachusetts Division of Fisheries and Wildlife. And check out Massachusetts’ Vernal Pool Association, where they describe ephemeral ponds as “wicked big puddles.” Pictures of animals can be found at The Vernal Pool.

If ephemeral ponds light your fire, check this (which the BugLady thinks looks interesting but cannot vouch for): A Guide to Creating Vernal Ponds.