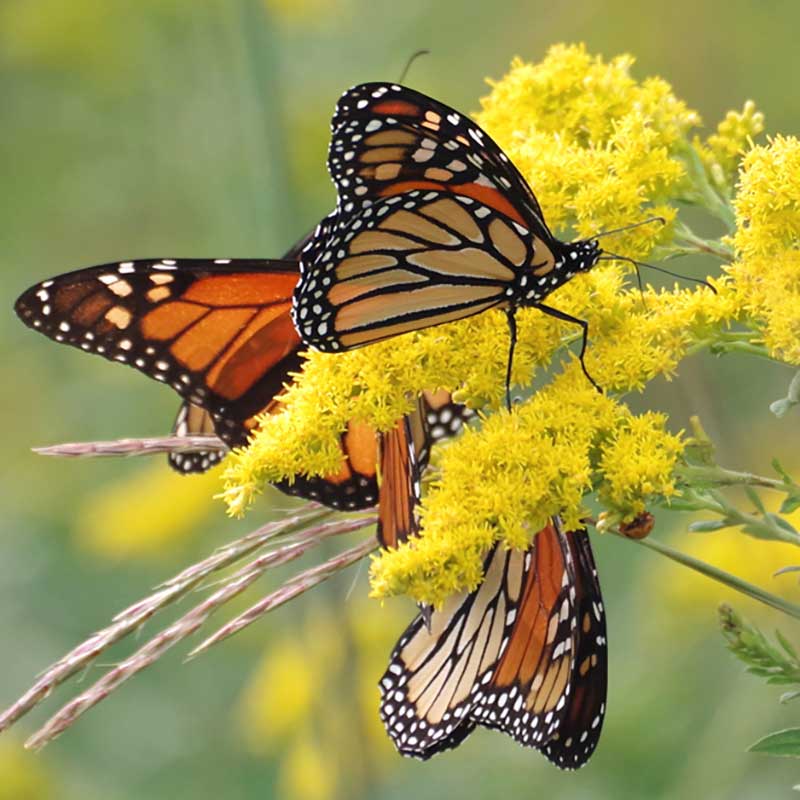 Wow! The first day of fall! Much as she loves a nice fall day, the BugLady clings to summer (maybe that’s why she keeps buying peaches even though she knows she’ll be disappointed). If you want to find bugs, look at flowers, so the BugLady has been searching the riot of wild sunflowers, asters, brown-eyed Susans, and goldenrod. Here are some of the bugs that have posed for her in the past month. 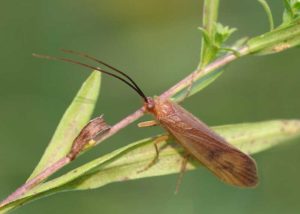 This mothy-looking CADDISFLY is actually not too distantly related to moths and butterflies. Caddisflies’ aquatic larvae use silk to form a portable shelter from bits of vegetation or tiny stones, though some skip the case and spin a net on a submerged rock so they can stay put in swift currents. What are they good for? Two words – Fish. Food. Fish prey on the larvae and on the emerging adults, and fly-tiers copy the caddisfly hatch. 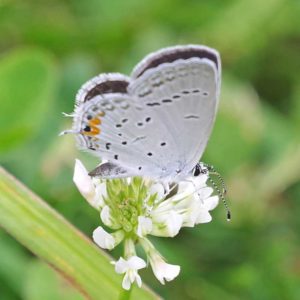 Tiny (wingspread under an inch) EASTERN TAILED-BLUES have several broods throughout the summer. They’re on the scene from May through September, and according to the Wisconsin Butterflies website, a few hardy individuals have been recorded into the first week of November! In September, look for them close to the ground, ovipositing on white clover in mowed paths. If your eyes are spry, you can see the contrast between their slate blue upper wings and their pale blue underwings in flight. 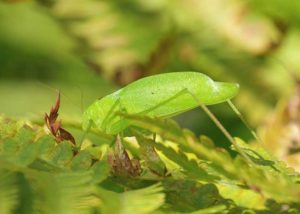 OBLONG-WINGED KATYDIDS should be green, right? It turns out that color is negotiable in some Orthopterans (grasshoppers, katydids, etc.). This species comes in brown, orange, tan, yellow, and Pepto pink.

Here’s a paper about their colors, and here’s what they sound like. 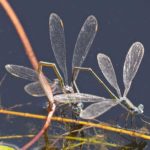 A female SWAMP SPREADWING damselfly deposits eggs into a plant stem as the male guards her by clinging to the back of her head. 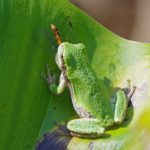 This small TREE FROG bit off a little more than it could chew. It managed to swallow the front half of a meadowhawk dragonfly, but it doesn’t seem to have enough room to swallow the rear half. Lots of roughage in dragonflies. 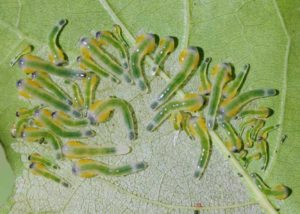 OAK SAWFLY LARVAE—If you turn over a partially-skeletonized oak leaf in summer, you may find these cute little skeletonizers, which look like slightly gooey caterpillars but are actually the larvae of members of a primitive wasp family. They eat the tender leaf tissue and leave the tough veins, and the end result looks like a macramé project. 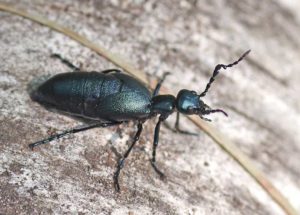 A MELOE BEETLE, a male, based on that crook in mid-antenna, descended the side of the log and joined another Meloe beetle, and hanky-panky ensued. Meloe/Oil beetles, in the genus Meloe, are members of the blister beetle family. “Oil beetles” because when they’re alarmed, they secrete oily drops from their joints that contain poisonous cantharidin, which causes nasty blisters on skin and does serious damage if taken internally. 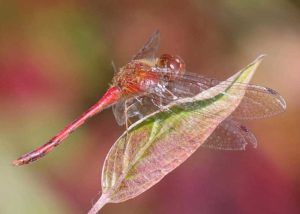 AUTUMN MEADOWHAWKS are the last dragonflies of the season, able to survive a few light frosts and operate in daytime temperatures down to about 50 degrees (although by then, there’s not much prey in the air). This one chose a backdrop of colorful dogwood leaves. 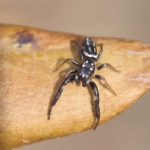 The BugLady found this handsome JUMPING SPIDER, Marpisa bina, at a nearby State Natural Area (thanks, as always, to BugFan Mike for the ID). Not a lot is known about the 10 species in the genus, but most are wetland-dwellers. 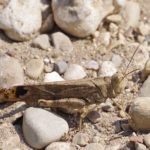 Well-camouflaged CAROLINA LOCUSTS hunker on the trails, waiting until the BugLady practically steps on them before taking off on yellow-trimmed, black wings, and imitating, briefly, butterflies. 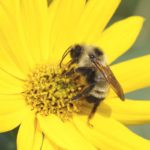 BUMBLE BEES, honey bees, and wasps of all stripes are abundant on flowers these days. Honeybees maintain their hives throughout the winter, but bumble bee and paper wasp nests are annual affairs – started from scratch by new queens every spring. The activities of the nest will cease with the frosts, but nobody’s told the workers. 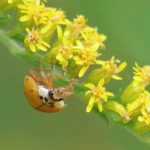 MULTICOLORED ASIAN LADYBUG—Oh sure, it’s cute now, but pretty soon it will be looking for a way into your house. 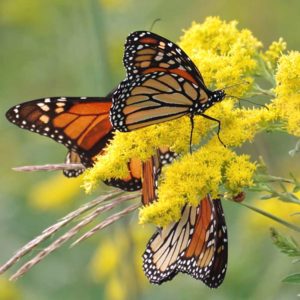 MONARCH—What would a late summer round-up be without Monarchs? About a week ago, the BugLady walked the prairie trails at Forest Beach Migratory Preserve and saw 249 crisp, new Gen 5 monarchs (the migratory generation), most nectaring on asters and goldenrods, sometimes 10 or 20 butterflies on a single clump of plants. Quality nectar plants are critical on the leisurely trip south – a newly-emerged Monarch has about 20 milligrams of fat in its body, but it needs to pack in another 100 milligrams of fat before it arrives in Mexico. (Trace that journey here.) These fat reserves sustain it during the winter. (If you never click on any of the BOTW links, please try this one.)

Go outside – it ain’t over until it’s over.