The BugLady tries to inject a dose of humor/irony/attitude into her insect biographies, but there’s nothing funny about today’s Bug o’ the Week, the invasive and highly destructive Emerald Ash Borer (EAB). True, the EAB (Agrilus planipennis) didn’t ask to come here, and the dynamics of its expansion/explosion into uncharted, tasty, and predator-free territory follows the pattern of many previous invasive species. But, the BugLady is a lifelong fan of ash trees, so this one is personal.

Wisconsin’s first Emerald Ash Borer infestation was discovered in the summer of 2008 on property adjacent to Riveredge Nature Center, just three miles from the BugLady’s home. EABs had been nibbling at the state’s north and south borders for several years, and their leapfrogging of several counties into Ozaukee County was a surprise. Since that date, they have been found elsewhere in the southern half of the state (go to Wisconsin’s Emerald Ash Borer Information Resource and click on the link labeled “Map”).

Originally from Asia, the beetle was first discovered in the Detroit, MI area in 2002. It had probably hitched a ride into this country as many as 10 years earlier. Its strong flight typically allows it to increase its range by a mile or two per year, but it doesn’t have to depend on its wings to travel, since people have been doing the heavy lifting for it. The EAB has traveled hidden in shipments of ash tree products, from nursery stock to firewood to pallets, and it has now spread from Lower Michigan to Pennsylvania, Indiana, Ohio, Illinois, New York, Kentucky, Missouri, Maryland, Minnesota, Virginia, West Virginia and two Canadian Provinces. Almost all of the northeastern quadrant of the U.S. 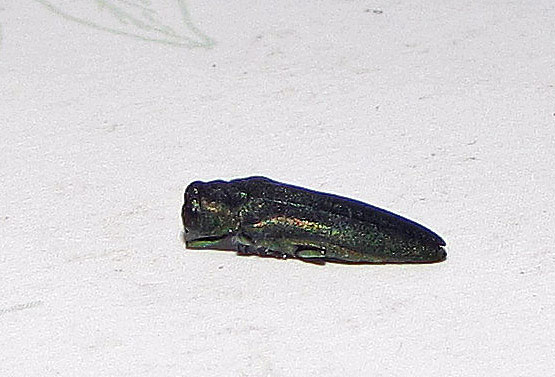 Named for their green coloration, EABs are in the Metallic Wood Borer family (Buprestidae), a group of often-iridescent, sturdy-looking, bullet-shaped, short-legged, beetles whose thorax and stiff wing coverings look pitted and tough. Not all ash borers are created equal; the native red-headed ash borer is in a different beetle family and is not a pest of healthy trees.

The EAB, which feeds only on members of the Ash family, is a grave threat to Wisconsin’s landscape. In the nearby Cedarburg Bog, for example, white ash grows in upland areas, and black, red and green ash are common in the wetter swamp hardwood and conifer swamp areas. The same inaccessibility that makes the Bog such valuable habitat for plants and animals makes comprehensive pest-control very difficult. At Riveredge, some 30% of the woodland trees are ash. Sources estimate that since 2002, 15 to 40 million North American ash trees have been killed by or are dying from EAB (most experts lean toward the higher number). To grasp its potential impact on Wisconsin, consider that the DNR estimates that there are more than 700 million ash trees in Wisconsin forests, and about 5 million more in our towns and cities. On its home playing field in Asia, the EAB is uncommon and ash trees can fend off an attack, but North American trees have no natural resistance.

Unlike Dutch Elm disease, a beetle-spread fungal disease that killed the majority of American elms, the damage done by the EAB is mechanical. The larval ash borers (grubs) tunnel and feed in the cambium and phloem just below the tree’s bark, blocking the flow of water and nutrients, and starving the tree’s crown. Their twisty tunnels are called galleries. Once infested, a tree is doomed, usually dying from the top, down within a few years. Dying trees often put up brushy new growth around the base of their trunk in an attempt to survive. Unlike their destructive offspring, adult EABs dine harmlessly on ash leaves. 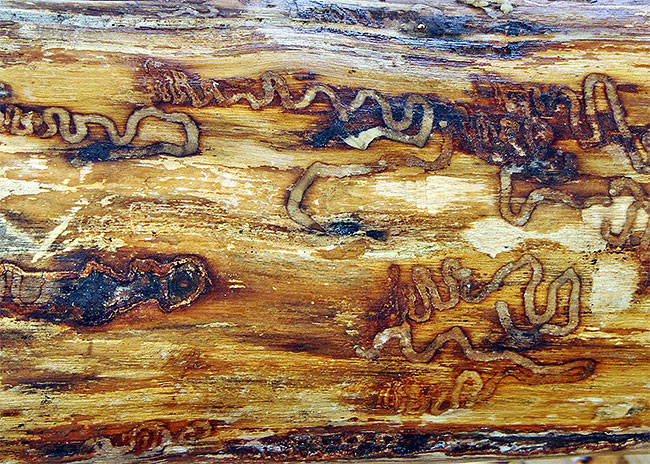 Eggs are laid in crevices in tree bark, and when the larvae/grubs hatch out, they bore down through the bark into the nutritious cambium. There they feed until they’re about an inch long in mid-fall. They appear to overwinter as larvae under the bark and pupate in spring. Adults emerge by late June, exiting through a characteristic “D” shaped opening in the bark. Adults are active during summer but are gone by September. It’s unclear whether they live one or two years. 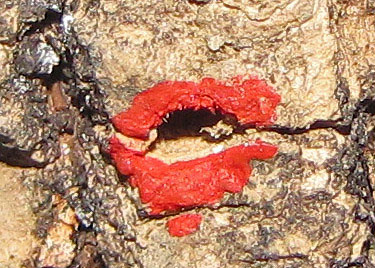 Woodpeckers make an occasional meal of the EAB, but it has no real enemies in this country. A few alien parasitic wasps are being tested as potential biological controls. When an infestation is discovered, quarantines on the movement of ash products, especially firewood, are imposed. Some states have tried destroying all ash trees, infested or not, within a certain radius of where the beetles were found, but this tactic has proved both unpopular and unsuccessful. There are a number of insecticides that show promise in preventing or treating an infestation. Since they are systemic and rely on being circulated via the same channels the larvae are interrupting, success in treating an infected tree is “iffy.”

This summer 8,700 large, purple sticky-traps will hang from trees in 71 of Wisconsin’s 72 counties. They are not a tool to control the beetle; they are an attempt to discover where the EAB is. They are baited with oil from the mankua tree, which smells like an injured ash tree. Last year 279 traps were deployed, and only one EAB stuck. The BugLady thinks this is a phenomenal opportunity to do general surveys of Wisconsin insect fauna and wishes that legions of entomologists were being deployed to record the non-EABs that meet their end on a purple sticky-trap. 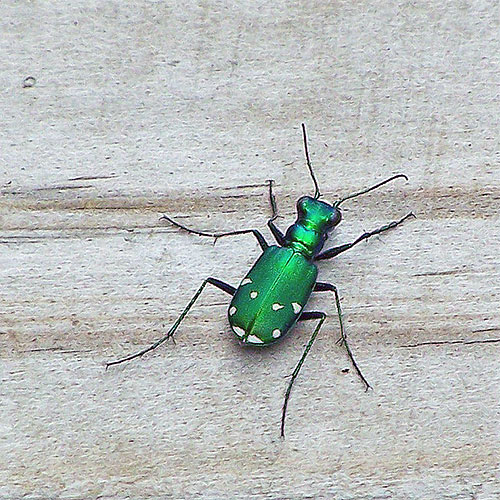 Kudos to Riveredge Nature Center, which has taken a leadership role in disseminating the information provided by the dizzying array of state and federal agencies that have been monitoring EABs since EABs hit the fan here in the summer of 2008. For more information try …

About the pictures. If the EAB adult and larva look like they might just have been poured out of small bottles of formaldehyde, there’s a good reason for that (Thanks, Mary). Also, out in Nature, the D-shaped exit holes do not come with tiny, red lipstick outlines.

Following closely on the heels of the EAB, of course, have been a number of “entrepreneurs” who misdiagnose infestations and sell bogus prevention, treatment and eradication services to worried land owners. Caveat emptor!