The BugLady and her camera have been out celebrating the fall colors (Mother Nature’s great, good, Technicolor gift before she turns the world monochromatic). She especially loves to photograph ash trees, which sometimes produce knock-your-socks-off reds and oranges but whose palette more commonly includes subtle, burnished, almost iridescent shades of amber, magenta, plum, and bronze (sometimes all in the same leaf). In honor of ash trees, here’s a slightly-tweaked rerun about Emerald ash borers from 2010 (updated facts and mostly new pictures because the BugLady has, alas, had ample opportunity to photograph the beetles in the past few years).

While the BugLady tries to inject a note of humor/irony/attitude into her insect biographies, there’s nothing funny about today’s Bug, the invasive and highly destructive Emerald Ash Borer (EAB). True, the EAB (Agrilus planipennis) didn’t ask to come here, and the dynamics of its expansion/explosion into uncharted, tasty, and predator-free territory follows the pattern of many previous invasive species. But, the BugLady is a lifelong fan of ash trees, so this one is personal.

Originally from Asia, the beetle was first discovered in the Detroit, MI area in 2002, but it had probably hitched a ride into this country as much as a decade earlier. Its strong flight typically allows it to increase its range by a mile or two per year, but it doesn’t have to depend on its wings to travel, since humans have been doing the heavy lifting for it. The EAB has traveled, hidden in shipments of ash tree products like nursery stock, firewood, and pallets, and it has now been recorded in most of the U.S. east of the Great Plains (plus Colorado and Kansas), and it’s found well into eastern Canada. 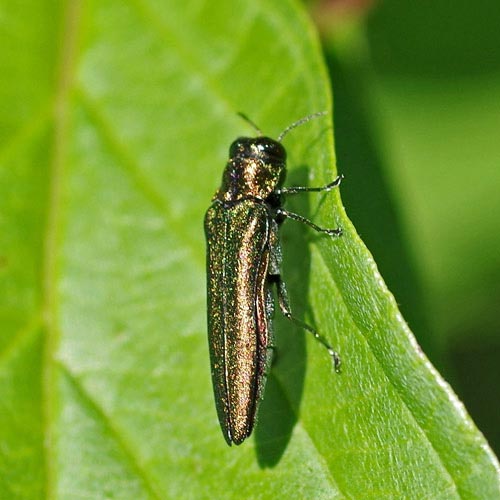 Wisconsin’s first EAB infestation was discovered in the summer of 2008 on property adjacent to Riveredge Nature Center, barely three miles from the BugLady’s home. EABs had been nibbling at the state’s north and south borders for several years, but their leapfrogging into Ozaukee County was a surprise. Since that date, they have been found in 39 Wisconsin counties.

Named for its sparkly green coloration, the EAB is in the Metallic Wood Borer family Buprestidae, a group of often-iridescent, sturdy-looking, bullet-shaped, short-legged beetles whose thorax and stiff wing coverings look pitted and tough. The EAB is one of several beetle species that makes its living on ash—a native long-horned beetle called the Red-headed ash borer, in a different beetle family, is not a pest of healthy trees. The BugLady is always surprised at how small these slender ¼” to ½” long insects are (females are larger than males). 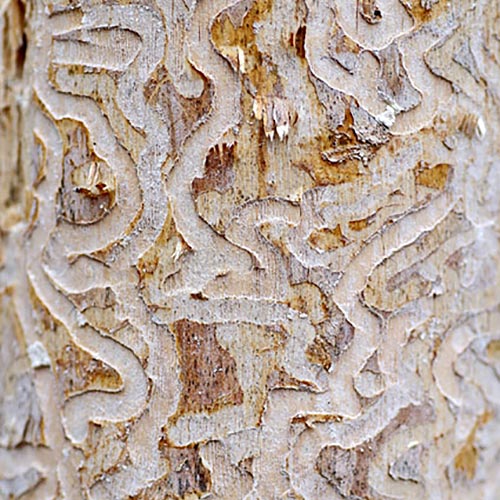 Males find females by hovering around ash trunks as the newly-minted females emerge. Eggs are laid in crevices in tree bark, and when the larvae/grubs hatch out, they bore through the bark into the nutritious cambium. There they feed until, by mid-fall, they’re an inch-plus long (double-to-triple the size of an adult). They overwinter under the bark as pre-pupae and pupate in spring. Adults emerge in June, exiting through a characteristic “D” shaped opening in the bark. Adults feed innocuously on ash leaves, are active during summer, but are gone by September. 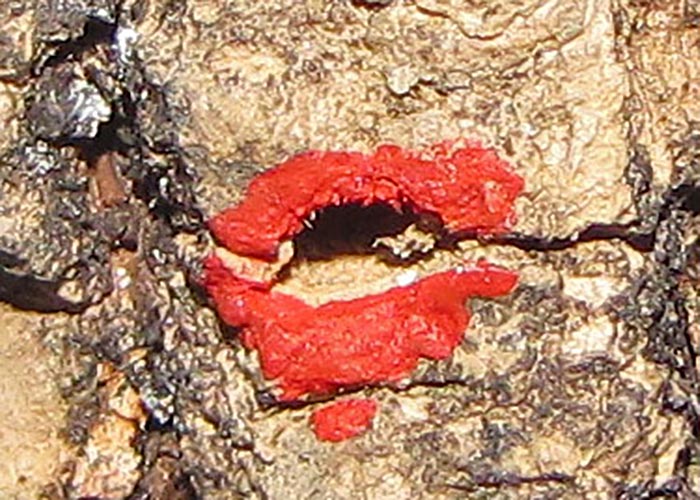 The EAB, which eats only members of the Ash family (though there’s an occasional report of non-ash feeding), is a grave threat to Wisconsin’s landscape. In the nearby Cedarburg Bog, between 10 and 12 percent of trees in the wetlands and uplands are ash. At Riveredge, between 20% and 25% of the woodland trees are ash. Sources estimate that in North America between 2002 and 2010, 15 to 40 million ash trees were killed by or were dying from EAB (most experts lean toward the higher number), and that right now, there are 50 million dead or dying ash trees in the Midwest alone.

To grasp its potential impact on Wisconsin, consider that the DNR estimates that there are more than 750 million ash trees in Wisconsin forests, towns, cities and countrysides (about 7% of our total trees), and the DNR predicts 99% mortality. On its home playing field in Asia, the EAB is uncommon and ash trees can fend off an attack, but North American trees have no natural resistance.

Unlike Dutch Elm disease, a beetle-spread fungal disease that killed the majority of American elms, the damage done by the EAB is mechanical. Larval ash borers (grubs) bore twisty tunnels called galleries and feed in the cambium and phloem just below the tree’s bark. The galleries block the flow of water and nutrients, starving the tree’s crown. Once infested, a tree is doomed, usually dying from the top, down within a few years. Dying trees often put up brushy new growth around the base of their trunk in an attempt to survive (epicormic sprouting). 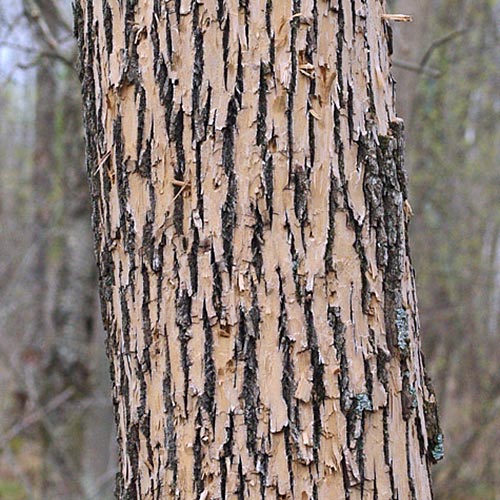 Populations of three species of woodpeckers (Downy, Hairy and Red-bellied) have increased as EABs move in, stripping off the bark to locate larvae below, but the EAB has no serious enemies on this continent. A few alien parasitic wasps are being tested as potential biological controls. Extreme temperatures during the winter of 2012-13 were expected to kill enough overwintering EABs to slow them temporarily (scientists all over the Upper Midwest were doing the math; Milwaukee and Chicago fell just short of the number of sub-10 degree hours needed for a significant kill), and winter temperatures are expected to be a problem for EABs in the far northern portions of their range. 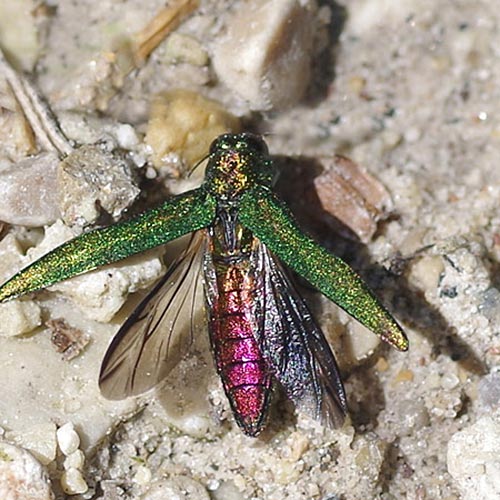 When an infestation is discovered, quarantines on the movement of ash products, especially firewood, are imposed. Some states have tried destroying all ash trees, infested or not, within a certain radius of where the beetles were found, but this tactic has proved both unsuccessful and highly unpopular. There are a number of insecticides that show promise in preventing or treating an infestation. Since they are systemic and rely on being circulated via the same channels the larvae are interrupting, success in treating an infected tree is “iffy.”

Kudos to Riveredge Nature Center, which has taken a leadership role in disseminating the information provided by the dizzying array of state and federal agencies that have been monitoring EABs since EABs hit the fan here in the summer of 2008. For more information try www.emeraldashborer.info (this site has some good links) and http://labs.russell.wisc.edu/eab/.

Following closely on the heels of the EAB, of course, have been a number of “entrepreneurs” who misdiagnose infestations and sell hope in the form of bogus prevention, treatment and eradication services to worried land owners. Caveat emptor!

About the pictures. If the EAB larva looks like it might just have been poured out of a small bottle of formaldehyde, that’s because it was (Thanks, BugFan Mary). Also, out in Nature, the D-shaped exit holes do not come with tiny, red lipstick outlines.