Hairstreaks are small butterflies (with wingspreads of just under an inch to about 1 ½”) of the eastern United States (they’re more common north of the Mason-Dixon line) that often take a second look to identify—and a third and fourth and—more about that later. There’s some similarity in the lifestyles of the various Hairstreaks, so although assorted hairstreaks will drift in and out of this episode, the Edwards’ hairstreak (Satyrium edwardsii) will be the hairstreak poster child. Hairstreaks are in the family Lycaenidae, the Gossamer-winged butterflies. While Hairstreaks are widely distributed, they are generally only locally common. There are a half-dozen hairstreaks that may be seen “regularly” throughout Wisconsin (Acadian, Coral, Banded, Edwards’, Striped, and Hickory). The Juniper hairstreak is typically found in the southwestern quadrant of Wisconsin, and the Gray hairstreak and a few others are rare visitors here.

Edwards’ hairstreaks (EHs) live in savannahs, sand barrens, limy ridges, and the edges and openings of oak thickets. There, the adults nectar on flowers of a variety of legumes, dogbane, sumac, milkweeds (there’s a reason they call it Butterfly weed (Aesclepias tuberosa)) and other summer flowers. The male EH perches on lookout posts, often high up in trees, to keep an eye out for females and will engage other males in territorial battles that spiral into the sky. There seem to be parts of the EH life history that are not completely understood. The consensus is that the eggs are laid in the summer in bark crevices or near the buds of young black, bur, white and other oaks. The eggs hatch the next spring, and the caterpillars feed and then pupate. Adults fly from the end of June to the beginning of August. But the BugLady also found various sources that said that EHs overwinter as caterpillars or as chrysalises.

EH caterpillars are oak-eaters, browsing first on the buds and later on the tender leaves. Young caterpillars eat during the day and apparently stay in the trees, but older caterpillars spend the day on the ground and feed in the trees at night. And here’s where things get interesting. It turns out that EHs get by with a little help from their friends. When you find an EH, you will find nearby a colony of Alleghany Mound Building Ants (Formica exsectoides) or of F. integra; both are species of large, red and brown ants that bite but don’t sting and who also protect themselves with formic acid. The BugLady once had an ant-eating teacher who said that on the red—red-and-black—black ant continuum, red ants are too spicy and brown/black ants are too bland, but red-and-black ants are just right. From what the BugLady reads, they have a citrus taste. The ants build their thatched mounds near the trunks of small oak trees, and they climb up into the trees to tend to “their” EH caterpillars and protect them from predators. Some people actually use the ant mounds to locate the caterpillars.

It gets better—at the base of an oak that is occupied by EH caterpillars, the ants build a smaller mound called byre or a chimney. Into this nest, the older EH caterpillars retreat at dawn and shelter during the day. According to some sources, the EH caterpillar will eventually pupate in the byre. What’s in it for the ants? Honeydew, which the older caterpillars secrete and the ants harvest. This kind of relationship, in which both parties benefit, is a kind of symbiosis called mutualism. Other Lycaenids, like the Azures, of previous BOTW fame, are also protected by ants. One researcher found that the caterpillars can communicate with the ants using both vibrations and chemical signals. 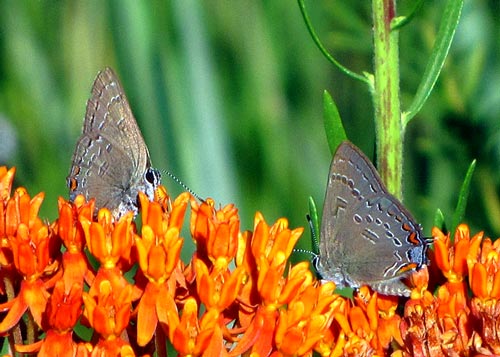 Hairstreaks are called “hairstreaks” because they have one or two hair-like tails near a noticeable eyespot on each hind wing (at about “five o’clock”). The theory is that a predator sees the tails and, confused, thinks they are antennae. If a predator does bite, the butterfly loses a chunk of wing, not gray matter. Most Hairstreak species have a single pair of tails, but banded hairstreaks have two pair and Coral hairstreaks have none. Hairstreaks tend to perch with wings closed, so you don’t often see the dark upper wing surface. The two cardinal rules in hairstreak identification are: 1) Hairstreaks don’t always have tails (due to age, wear-and-tear, and/or the above-mentioned predator); and 2) Check out the Eastern Tailed Blue, which is tailed but is not a hairstreak. Hardest to tell apart are the Striped, Edwards’ and Banded hairstreaks (and the BugLady hopes her IDs are right). Once again, the BugLady recommends Wisconsin Butterflies, Mike Reese’s great butterfly site, for Hairstreak information and pictures.

Limiting factors for the EH include natural forest succession, because the sun-loving food plants that are found in sunny forest glades die off as the forest canopy closes over, and the pesticides used in gypsy moth control. Fire suppression gooses the succession time-line. 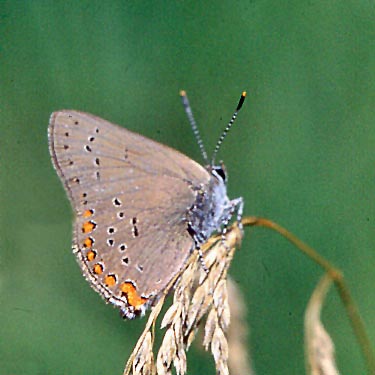 Santa brought the BugLady a book called The Butterflies of Iowa by Schlict, Downey and Nekola for Christmas (thanks, Santa). In it, each of the species write-ups ends with a “Questions” section, highlighting some unknowns about the species. The hope is that the observations of Citizen Scientists will help fill in gaps in our knowledge of these beautiful insects.