An old birding buddy in Texas once advised the BugLady that you should eat black-eyed peas on New Year’s Day and do a little bit of everything you hope to do during the New Year. To that end, the BugLady is dedicating the first BOTW of 2013 to a dragonfly. 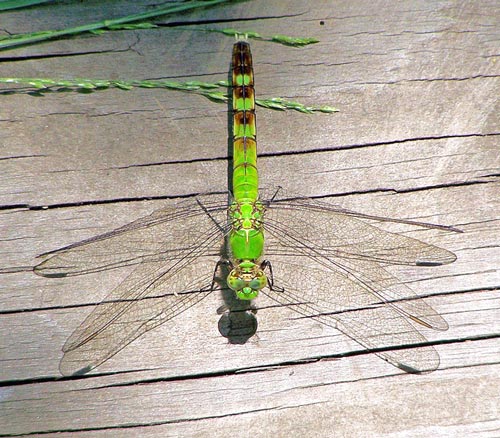 Female EPs and juvenile males are brilliantly green, with dark-tipped abdomens that are decorated by “square,” black spots/bands/chevrons. As they age, males develop a waxy surface layer called pruinosity that hides the green and makes them look blue (from the Latin pruinosus, meaning covered with hoarfrost). The color change starts at the tip of the abdomen and moves forward, and an almost-fully-adult male may have a green thorax and a blue abdomen. Legler, whose Dragonflies of Wisconsin is The Bible around here, notes that these young males suggest a (much larger) Green Darner. For a peek at all the EP’s different “plumages,” scroll down. Males have a pair of white claspers at the abdomen’s tip, and females’ terminal appendages are also white. Males, females and juveniles have green faces (they’re the only Skimmers that do), variably green eyes, an un-striped thorax, and three respectable spines on their second and third sets of legs (all the better to catch you with, my dear). They’re about 1 ¾ inch long.

Like all dragonflies, EPs are carnivorous both as aquatic youngsters (naiads) and as aerial adults. Naiads “sprawl” on pond bottoms or climb on submerged vegetation looking for invertebrates to eat. Adults hunt from the ground or from perches, snatching out of the air a variety of flying insects including butterflies and moths, damselflies, and other dragonflies (the practice of cannibalism, especially by females, is not uncommon). Mead, in Dragonflies of the North Woods, reports that EPs will cash in on the swarms of biting insects that follow large mammals, including humans. Though they usually perch to eat, they can feast on the wing.

Male EPs are territorial, defending about five square yards of floating vegetation, and they are among the fiercest of dragonflies. The visual cues they react to involve the color of the “intruder,” not its flight pattern or behavior; a green dragonfly elicits a different response than a blue one. Territorial males perform a kind of aerial sparing called “vertical circling.” Two males fly over the water’s surface; the EP in the rear ducks under his rival and pops up in front to take the lead. The first male flies under the leader and regains the lead. Repeat, up to a dozen times.

After mating, a female flies above shallow water, smacking the tip of her abdomen through the surface film to put her eggs into the algal mat. Males may guard females as they oviposit—she will mate several times a day, and if another male copulates with her, the first male’s sperm will be displaced. She lays about 900 eggs a day.

According to Paulson, in Dragonflies and Damselflies of the East  EPs habitually perch on the ground, a practice that makes them vulnerable to predation by Tiger beetle larvae (of previous BOTW fame), which hunt from tunnels in the earth and which may nab a resting dragonfly from below!

EPs are in the Skimmer family (Libellulidae)—a large group of common, often-flashy, mostly-pond-dwelling dragonflies. Regional names for EPs include Common Pondhawk, Green Dragon, Green Jacket Skimmer, and Green Jacket (the Western Pondhawk is now recognized as a separate species). They’re found throughout the United States east of the Rockies, near still waters that hold a load of floating leaves. According to Legler, a small component of the EP population may emerge in fall instead of early summer, and Mead says that northern adults are believed to be somewhat migratory; the BugLady wonders if they’re talking about the same bunch of dragonflies.

FYI, Dragonfly enthusiasts—the only place the BugLady knows of where you can buy Legler’s book is the UW-Madison Arboretum Bookstore.

The 12 Bugs of Christmas II