First off, the BugLady should just break down and hire BugFan Tom to proofread everything before she hits “send.” He points out that in the recent episode about Pygmy Backswimmers, she referenced the family of the more familiar backswimmers three times but only spelled it correctly once. Should be Notonectidae. Spell Check doesn’t care for any version of it.

They’re back. Some of the larger species of Hover/Flower/Syrphid flies are early feeders on pussy willow pollen, but the BugLady always looks forward to seeing their smaller relatives as the spring wildflower season gets rolling.

Syrphids are small-to-medium-sized flies that occupy flowers from spring through fall. They’re called “flower flies” because of the places we find them, “hover flies” because they do, and syrphid flies because they’re in the family Syrphidae. There are 800+ syrphid species in North America, and we have visited them before in the person of drone flies and of syrphid flies in the genus Temnostoma.

Some syrphids have bee-like bands or bars around/partly around their abdomens, while others, like today’s bug, the Eastern Calligrapher (Toxomerus geminatus), wear exquisitely etched patterns (the BugLady only found one source that gave this fly a common name, but isn’t it a fine one!). There are 13 species in the genus in North America; some are quite common, and a few other genus members are pictured here.

At 6 to 7 ½ mm long, the Eastern Calligrapher is mid-sized for its genus. Like many syrphids—even the mosquito-sized species—it mimics bees and wasps but has no stinger. Yellow and black are Mother Nature’s warning colors, but a quick wing-count will separate them (wasps and bees have four wings, and flies have only two). They add to the deceit by making a buzzing/droning sound. Unlike dragonflies, whose patterns may darken on a chilly day, adult syrphid colors are “set” by the ambient temperatures during their pupal period. According to bugguide.net, “if it was hot, the yellow/orange increases and the background becomes lighter, but if it was cold, the dark/black increases and the yellow/orange becomes darker like the background.”

Adult syrphids feed on pollen and nectar, especially on large, flat, pale flowers, and they are considered pollinators even though they don’t have specific pollen-carrying structures. They may also sponge up aphid honeydew that has fallen on a leaf. The BugLady found conflicting statements about the Eastern Calligrapher’s larval diet. Decaying vegetation (and sometimes, living bulbs) suffice for many syrphids, but there are a bunch of carnivores in the crowd, too, prized as biological controls of aphids (the aphid-eating larva pictured here is a different genus). There are a couple of maverick Toxomerus members known to eat pollen—one from South America and one, Toxomerus politus, from our back yard (and there may be more; one source suggested that all larvae on the genus are pollen feeders). Toxomerus politus, pictured here, feeds on corn pollen.

And speaking of South American syrphids, there is one that lives among sundew plants as a larva, stealing some of the prey that the sundew traps with its sticky leaves (it’s called kleptoparasitism). 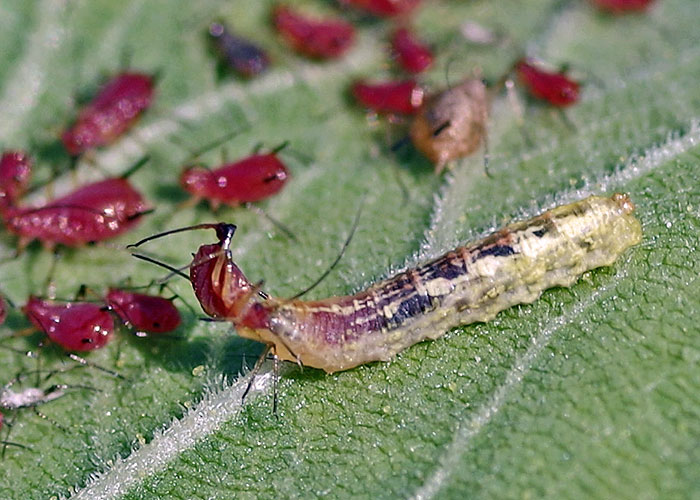 Males hover in the open in hopes of attracting a female, and males of some species defend a territory. Eggs are laid one at a time – in the case of carnivorous larvae, near flocks of aphid nymphs. They overwinter as larvae and complete their transformation in spring. When the BugLady was cruising the bugguide.net images of the Eastern Calligrapher, she found a picture of its puparium, and it looked like a picture she had stashed in her “x files”. A puparium is the larva’s final skin, hardened. The pupal case is formed inside the puparium, but not many insect groups bother to create this extra layer. In order to exit the puparium, the flies have to inflate, by blood pressure, a small and temporary “balloon” (the ptilinum) on the front of their face to butt through it. Adult syrphid flies are good flyers, but they tend to stay near their larval habitat. 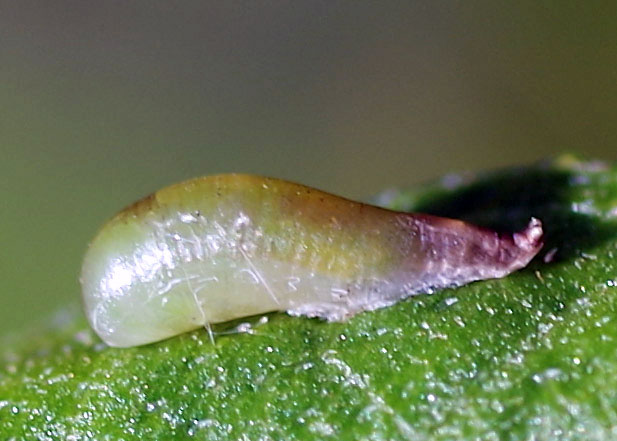 On an unrelated (and vertebral) topic—click here for everything you ever wanted to know about bird eggs: see Hilton Pond Center for Piedmont Natural History web site.