The weatherman keeps saying “Mixed precipitation” and it’s making the BugLady plenty crabby, so she’s going to think about dragonflies, instead. Here’s a little bit of sunshine on the wing.

Several BugFans have asked the BugLady how she selects the stars of BOTW, and she answers that first, she needs a decent picture to spin the tale around. Well, the Eastern Amberwings have posed prettily (some of them), so the failure is on the BugLady’s side of the camera. She’ll just have to keep trying, but meanwhile, this tiny dragonfly has some interesting stories to tell.

At just under an inch in length, the Eastern Amberwing (Perithemis tenera) is the second smallest dragonfly around (the very-uncommon Elfin Skimmer is a bit smaller and is not yellow). Their flashy wings make them look bigger than an inch to the BugLady. The male EA’s wings are pure gold; the female’s wings are brown-spotted on a sometimes-amber background (she resembles a tiny Halloween Pennant, of previous BOTW fame). Males and females have yellowish legs and have rings around the segments of their abdomens. The abdomens of both are thick (the female’s looks especially swollen).

Because of their coloring, their rapid, erratic flight, and the way they twitch their wings and abdomens when at rest, EAs are considered wasp mimics. Their wasp disguise may save them from aerial and terrestrial predators, but the BugLady found a website instructing fly fishermen on how to tie an EA fly; apparently fish are willing to take a chance.

Where do you find them? Over most of the U.S. east of the Great Plains and south into Mexico. Here in God’s Country they fly in mid-summer, but they grace the landscape year-round in the southernmost parts of their range. Look for them near quiet or very slowly-moving waters. Look for them, too, far from water, hunting at grass-top-height over weedy fields or perched on vegetation at a woodland’s edge.

Where do you find them, entomologically speaking? In the order Odonata (the dragonflies and damselflies) and in the family Libellulidae (the Skimmers). Perithemis apparently is a reference to Themis, a figure in Greek mythology, and a number of other Skimmer genera incorporate Themis’s name. According to Berger and Hanson in Dragonflies, tenera is Latin for tender, delicate, or soft and implies youth (a dragonfly is called a teneral during the first few days of adult life).

They are “perchers,” and unlike most dragonflies, may be seen sitting on flowers (they are not considered pollinators). On hot, summer days, they may lower their wings to shade their thorax and point their abdomens skyward to reduce direct contact by the sun’s rays. EAs find food by patrolling or by perching and watching; they catch insects in flight, but they generally perch to eat them. Females often raise their abdomens while in flight.

The aquatic young (naiads) eat tiny fellow-aquatic invertebrates, and unlike the more specialized naiads of other dragonflies, they use all parts of their habitat, hunting at any depth in their pond’s water column. For their carnivorous ways, EAs and other dragonflies are given a thumbs-up by a Florida pest control service, which says,

From the tiny Eastern Amberwing, to the flamboyant Halloween Pennant, dragonflies are some of the most important and charismatic beneficial bugs. They’re indiscriminate predators of many pest insects, including mosquitoes, flies, ants and wasps… Next time you see one zip across your yard, consider saying thanks to the dragonfly for helping to control the pest population. 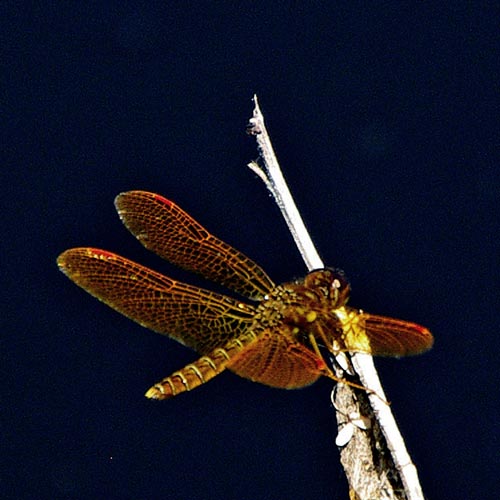 EAs sure know how to court a gal. A male flies low over the water, patrolling a territory about 20 feet wide of choice egg-laying turf (weedy aquatic sites) and defending it vigorously darting out at intruders and displaying with those spectacular wings. When a female approaches, he follows and courts her, swaying back and forth, abdomen raised. If she’s agreeable, she follows him home. He hovers over his territory while she evaluates it, and if she likes it, she gets him along with it. After mating, she lays eggs usually alone, but sometimes under his watchful eye. The blob that she releases from the tip of her abdomen explodes as it enters the water, releasing as many as 150 eggs over the water’s surface. In his zeal to protect his “investment,” the male sometimes grabs an intruding male and flies in tandem with him, keeping him away from the female.

It’s not surprising that a critter that’s as flashy, as unmistakable, as widely distributed, and that has so many interesting behaviors has attracted the scientific community. A number of different studies have demonstrated, at least, that EAs have attitude. Here’s what has been discovered about them: