OK, there are two ways to approach earwigs. Intellectually and Emotionally.

Intellectually, Earwigs are interesting little insects, classified in the order Dermaptera (skin-wings) a reference to their short, smooth forewings. Some species have 4 wings, some have only short, leathery forewings, and some are wingless. They max out at just under 1 ½ inches. Earwigs metamorphose simply, shedding, growing wings and adding segments on their antennae until maturity. They are harmless nocturnal omnivorous scavengers whose chewing mouthparts allow a diet that includes organic debris, other insects (they stalk aphids by night), and plants (with some fruit and garden plants thrown in occasionally). Bland and Jacques, authors of How to Know the Insects, reveal that there are tropical earwigs that act as ectoparasites (external parasites) of both bats and rodents. Twenty of the 1,100 earwig species occur in the U.S., including the alien European Earwig. 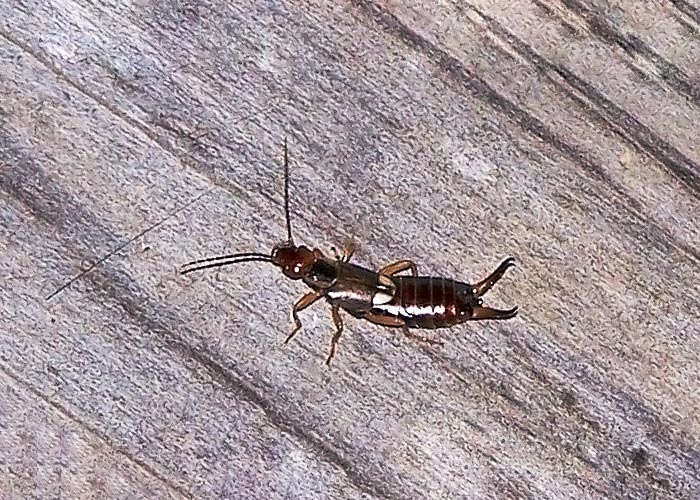 Forceps-like appendages (cerci), more prominent in males than females, decorate what the BugLady’s Sainted Grandma called “the part that goes over the fence last,” giving them a scorpion-like appearance. They can, indeed, pinch with their cerci, and 4-winged species also use cerci to assist in folding the soft hind wings under the stiff forewings after flight (few kinds of earwigs fly). Some can also defend themselves by spraying a noxious fluid described as smelling like creosote.

In some species, Mother Earwig has uncommon, among arthropods, anyhow, maternal instincts. She protects her eggs (laid in a nest in the ground) and may also care for and feed her newly-hatched young until they can fend for themselves. Skeptics may check out a photograph in The Audubon Society Field Guide to North American Insects and Spiders by Lorus and Marjory Milne.

Old Wives falsely accuse earwigs (sez them!) of many crimes. Their name may come from an old English superstition that they crawl into the ears of sleeping people in order to bite them (an occurrence that one entomology book dismisses as “rare”) (!!!) This notion was enhanced by the fact that earwigs used to shelter in wigs that the be-powdered English gentlemen and gentlewomen stored on wig stands, presumably ready to pounce the next time the wigs were worn. Too, they have no real interest in destroying the hearing of or entering the brains of humans. Allegedly. Eric R. Eaton and Ken Kaufman in the Field Guide to Insects of North America, attribute “earwig” to a corruption of “ear-wing,” a reference to the ear-shaped wings of some species.

Emotionally—YUCK!!! Really! It always creeps the BugLady out when masses of photo-phobic earwigs dart for the dark as she picks up a flower pot or opens her mailbox (the Jumping spiders that also occupy her mailbox undoubtedly make inroads on the populations of both the earwigs and the ants that wait for the BugLady’s mail). The nadir of her earwig interface came when she flipped up the cover of the garage-door-opener keypad and 7 or 8 earwigs dropped out. Earwigs as ectoparasites—ICK! 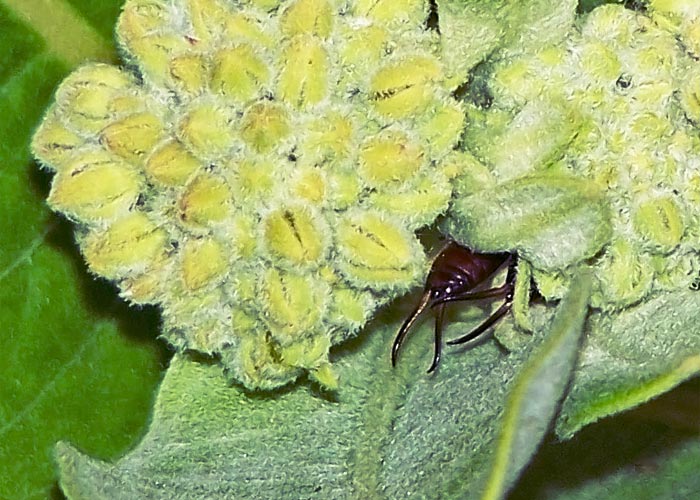 The BugLady can only hope that the pair of earwigs in “earwigs 1” are hewing to the old dormitory rule of “four (or, in their case, six) feet on the floor.

And so, as we celebrate holidays of all persuasions, the BugLady wishes you the best and leaves you with seasonal Visions of Earwigs (um) Dancing in your Head…