The BugLady is departing (again) from the confines of the entomology book for this “bug” (fyi, new BugFans, our definition of “bug” is closer to that of a first grader than that of an entomologist).

In her childhood, the BugLady was deeply moved when a character in the play Teahouse of the August Moon said “when you kill a worm, you kill a friend.” Worms, we are told, honeycomb the soil with their tunnels, letting in air and rain, and they build new soil with the deposits (worm castings) that mark their passing. Happy earthworms make happy gardens. So, in the ensuing decades, when it “rained worms” (rained so hard/long that their tunnels flooded and worms hit the streets), she rescued road-worms and deposited them in the moist grass instead of leaving them for the noonday sun or for the birds. Now, she has learned, Wisconsin earthworms are aliens that are damaging to forest ecology.

Earthworms live in u-shaped tunnels in the soil. They stay indoors during the day because sunlight’s UV rays immobilize them and ultimately dry out the moist skin through which they breathe. They live in the dark. Eyeless, they sense light with their skin, and earless, they are very sensitive to vibration. Their senses of taste and touch are well developed.

An earthworm’s smooth, moist skin, with its rows of bristles, overlays an impressive muscle system. Progress through the dirt (or resistance to potential predators) is achieved by extending their front end, swelling it so it fills/jams the circumference of the tunnel and its bristles grip, and then contracting its rear half. And, yes, if enough of the front half of an earthworm is separated from its rear half by a shovel or a tug-of-war, the front can regenerate a portion of its “tail.” 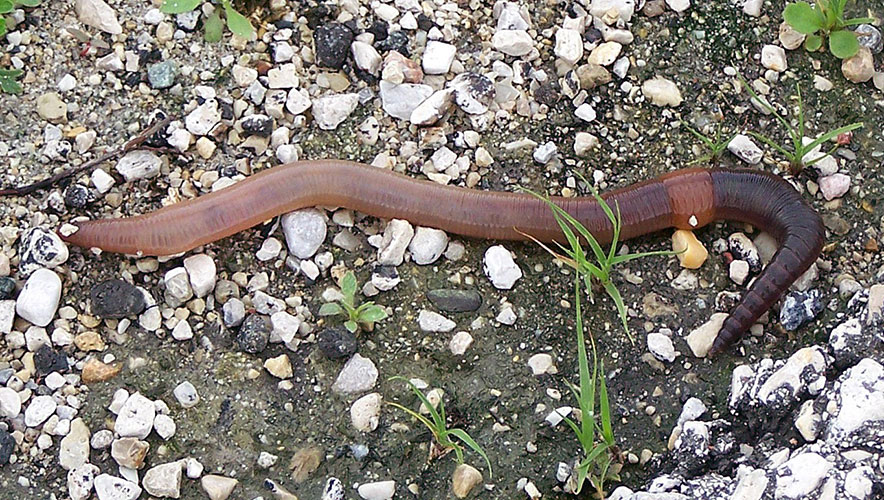 Diet consists of organic material which they ingest as they move through/excavate their tunnels. In loose soil, they are picky about what they eat; in compacted soil, the only way they can move is by ingesting everything. As a result of its trip through an earthworm, material is broken down into smaller pieces and its pH is brought closer to neutral before the residue is deposited on the surface as a worm casting. Check out Life in a Bucket of Soil, by Alvin and Virginia Silverstein and Discover Nature Close to Home by Elizabeth Lawlor for great descriptions of the earthworm lifestyle.

The soils that the glaciers chewed up, froze, compacted and re-deposited ended up earthworm-free, and the plant communities that became established in those post-glacial soils evolved free of the considerable impact of these alien worms. The BugLady still hasn’t heard a satisfactory answer about Wisconsin’s Driftless Area (which, although it was un-glaciated, was still exposed to the permafrost conditions that existed south of the actual ice sheet). Statements like “We have no way of knowing whether earthworms existed in Wisconsin before the glacier;” “Terrestrial ecologists in Wisconsin note earthworms are native to the farmlands, savanna and prairie lands in southern Wisconsin, but there is little research to determine which worms were native in formerly glaciated areas;” and “One of the greatest misconceptions about earthworms, is that they are native in northern hardwood forests” exist side-by-side in the literature.

At its maximum, the most recent glacier extended into Iowa and central Illinois. According to the people who measure these things, earthworms move at a top speed of about 5 ½ yards a year. They did the math and found that on their own, earthworms might have trekked north approximately 35 miles in the last 11,000 years. So, they had help. Alien earthworms were introduced to the upper Midwest when settlers imported fruit trees whose root-balls were bundled with soil and soil critters (often, alien), and worm repopulation continues through landscaping projects. Fisherpeople take note – earthworm populations are dense near lake shores where bait buckets are emptied at the end of the day.

Earthworms live up to their reputations as soil builders, and their contributions to farming and gardening are not argued. But their impact on forests is profound and negative. Pre-earthworms, the decomposition rate of organic matter on the forest floor was slow, accomplished by bacteria and fungi that made big pieces into little ones, creating below the trees a soft, deep, nutrient-rich “duff” that sheltered small animals, acted as an insulator and provided a mulch for seedlings and wildflowers to grow in. In contrast, worms compete with some important fungi, and they mix, rearrange, compact and eat leaf litter, duff and top soil, making conditions hostile for seeds. In the process, worms also eat the seeds, depleting the seed bank and hampering future regeneration. With the character of the forest floor altered, ground-dwelling animals both tiny and large lose both home and food, setting the stage for more alien “generalists” and lowering biodiversity.

For more information, try Project Worm Watch. And, if you’re not familiar with the Wisconsin DNR’s excellent kid’s website, check out/google EEK! Click on “critter corner” and then on “alien invaders” for a good article.

As for you, little earthworms—you’re on your own, bon chance. And bon appetit little birds!