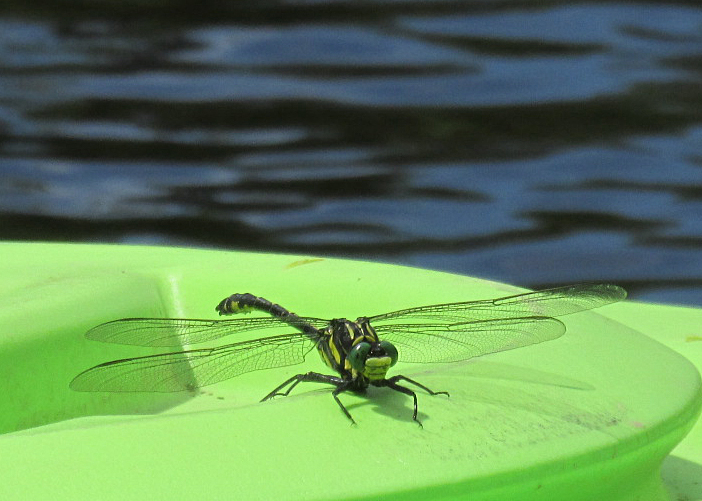 Dragonfly July is drawing to an end.

The BugLady’s younger daughter and her friends have been taking to our northern woods and lakes this summer (where the cool bugs are), and she’s sent tantalizing pictures of her encounters. A large Emerald dragonfly perched in the middle of her campsite, a spectacular darner, and this guy, a Dragonhunter, which apparently checked them out as they paddled, sat on a kayak, and even sat on one of the paddlers. Shout-out and photo credit to BugFan Laurel.

The BugLady thinks of this species, like loons, as the voice of the north woods, and while it is true that it occurs in the northern half of Wisconsin, its range actually extends from the Maritime Provinces to Manitoba to Texas (except for southern Wisconsin/northern Illinois and the south end of Florida). Look for it along sunny rivers and streams with a moderate/fast current, on lakes and bays, or foraging over open roadways or along woodland edges. 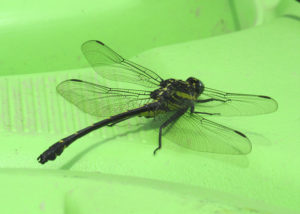 This is one spectacular dragonfly, and everything it does is larger than life; Kurt Mead (Dragonflies of the North Woods) calls it “a legendary insect.” It is 3 ½” long and is often called our bulkiest/most massive dragonfly. Its coloring is a stark yellow and black with black legs and black-veined wings (its naiad is unique, too). Its behavior is aggressive – and inquisitive – and its choice of prey is startling. Even its pedigree is unusual. The Dragonhunter, aka the Black Dragon (Hagenius brevistylus), is the largest of our clubtails (family Gomphidae) and is an American specialty, the only member in its genus (its closest, relatives, equally large, are in the genus Sieboldius on the Asian continent).

Here’s what they look like when they’re not perched on the bow of a lime green kayak – an adult male, and a face to face. The club at the end of the abdomen is pretty narrow, and the downward-curved tip of the abdomen is typical, even in flight. 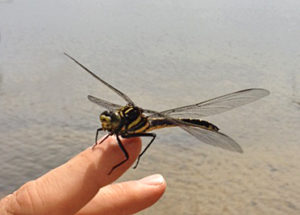 Their long, strong wings allow them to chase fast-flying prey (they can hit about 25 mph) and their legs are equipped with stout spines so they can hang onto it. Legler, in Dragonflies of Wisconsin, says, “When feeding it perches on dirt roads waiting for other dragonflies, including darners, to fly down the road. The Dragonhunter then swoops up after the darner from behind. Or it may perch on branches high in treetops. It then swoops down on passing dragonflies and back up to the treetop to eat.” Dragonflies (sometimes even other Dragonhunters), make up a respectable proportion of their menu (here’s one with a Widow Skimmer).

So, too, do large butterflies. One author reported seeing a pile of swallowtail wings beneath a perch frequented by a Dragonhunter, and they also hunt for monarchs, especially when monarchs are numerous. Monarch butterflies, of course, are poisonous due to the milkweed sap they ingest as caterpillars; the highest levels of toxins are in their wings, but the Dragonhunters discard those, preferring the butterfly’s thorax and abdomen. When pressed by Dragonhunters, monarchs change their behavior, eschewing their preferred sunlight and feeding in the shade that Dragonhunters avoid.

And then there are hummingbirds. The BugLady found a note in the journal of a Welsh dragonfly society about one of its members who, while on vacation in Canada, came across a Dragonhunter attempting to subdue a Ruby-throated Hummingbird that was about the same size. He managed to separate them (carefully and with some difficulty), and they went their separate ways. (Yes, there’s a picture. Scroll down.)

They seem impervious to the stings of bees and wasps, which they also catch.

The dark, quarter-sized naiads, disguised among the fallen leaves on the river’s floor, eat small invertebrates including other dragonfly naiads, and young amphibians and fish. 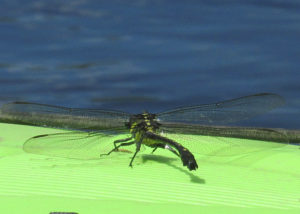 Male Dragonhunters are territorial, showing off along the sunny edges of their waterways. They mate in the treetops and don’t do a lot of tandem flying, and the female often emerges from the experience a little the worse for wear (as Ohio nature writer Jim McCormac says, “The courtship is Neanderthalish, no gentle New Age insect here.”). Males have short, strong claspers, and his firm grasp often punctures her head or eyes. Both male and female are polygamous.

Females fly across short stretches of open water, ovipositing by tapping the tip of her abdomen into the water or by tossing eggs in from above (Legler again, “Or, most remarkably, she sometimes swings her abdomen rigidly like a golf club knocking little a globule of eggs and water up onto the bank!”). Eggs are gel-covered and sticky and are soon camouflaged by a layer of silt. The naiad stage is a long one, lasting from four to seven years, depending on the water temperature, and not surprisingly, the naiads are pretty freeze-tolerant. Like some other clubtails, they stage large, synchronized emergences in early summer, with naiads leaving the water en masse and crawling up onto the shore and even up tree trunks. Adults live about three months.

Females are colored similarly to males, and unlike many other dragonfly species, are found around the water when not breeding (no one messes with her).

The Twentieth century brought an unneeded complication into the lives of Dragonhunter naiads, in the form of alien zebra mussels, immigrants from Europe that like to fasten to stationary objects (for more about zebra mussels). Their round, flat shape and the fact that, unlike other clubtail species, the naiads don’t burrow makes them an attractive substrate to the mussels. A small load of mussels doesn’t affect the naiad’s feeding but can hinder its final molt. 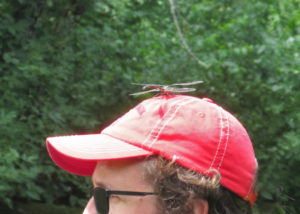 Paulson, in Dragonflies and Damselflies of the East, says that “Adults at water usually approachable“, and the Dragonhunter is sitting on the kayaker’s head, and that brings us to the BugLady’s friend Joe, who walked to the shore of a northern lake, put out his hand, and a Dragonhunter came in and sat on it.