It’s been a remarkable year for dragonflies in southeastern Wisconsin. They made the print and television news in early August, when green darners, appearing in huge swarms, were hailed as saviors from the flood plain mosquitoes that had just emerged in cosmic numbers. These impressive sights only happen when the ecological “planets” are aligned just right, and they may not recur for years. 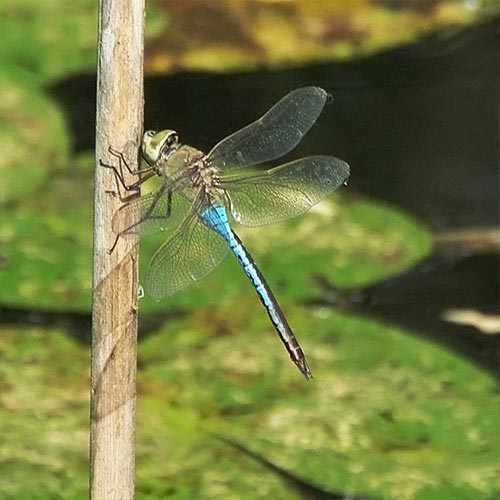 Green darners are powerful, hummingbird-sized dragonflies that patrol the air for insects and never seem to land (at least not when they see the BugLady’s camera, a sad story BugFans have heard in these pages before). Some of our green darners migrate here, ushering in the dragonfly season during the early days of spring. These migrants, nearing the end of their journey both geographically and cosmically, lay eggs in the warming waters and soon die.

Their eggs hatch into young called naiads, which spend the summer under water, preying on their fellow aquatic invertebrates (including quantities of equally aquatic mosquito larvae). The naiads emerge as adults in late summer and migrate south in fall, and their offspring will make the return journey to Wisconsin the following spring.

Another population of green darners is home-grown, and their watches are not synchronized with those of the migrants. Naiads of the resident green darners spend the winter under the ice, feeding in slow motion on small critters in the frigid water. They emerge in early summer, replacing the dying adults of the migrating population, and they lay their eggs by mid summer.

Dragonflies hunt for mosquitoes on the wing, and they eat moths, beetles, flies and wasps, too–100 and more per day. Dragonflies can fly at speeds of up to 30 mph, and because they have the option of working each wing independently of the rest, they are remarkably maneuverable.

Unusually large summer dragonfly swarms were not unique to Wisconsin on 2010. The phenomenon was reported from Iowa to Vermont to Florida, and points in between, with green darners a major player in most accounts and with local experts offering a variety of explanations and assuring their audiences that dragonflies are harmless to people, pets and livestock. In general, weather gets the credit for producing huge numbers of insects. There was an early, deep, insulating snowfall here before the wetlands froze, which was favorable for the naiads and their prey. There was an early spring–it got warm and it stayed warm, favoring abundant food for growing naiads. July was hot and wet, and the rain filled low lying areas, creating impromptu, fish-free nurseries for aquatic insects. The adult dragonflies emerged a bit early, simultaneously with an explosion of dragonfly food.

So, what were all those dragonflies doing up there? An aquatic entomologist who blogs under the name of “Dragonfly Woman” is collecting reports of dragonfly swarms (she invites people to send their observations to her website at http://dragonflywoman.wordpress.com/). She writes that where last year she was getting 30 hits per week on her swarm pages, this year she is getting 500 hits. Dragonfly Woman divides swarming behavior into low-altitude, static (mostly feeding) swarms and high-altitude migratory swarms. Static swarms tend to be localized, with groups of dragonflies of several species circling or flying in figure-eights, no higher than about 20 feet off the ground. Static swarms happen in mid-summer. If you look closely, you might see their small prey just above the grass-tops. If there are lots of small static swarms, they may be part of a larger super-swarm.

Dragonfly Woman describes migratory swarms as fast-moving “rivers of hundreds of thousands of dragonflies all flying in a single direction and covering large distances.” There may be several species present, but one species dominates. Only about a dozen of the 400 or so dragonfly species in North America migrate; the rest live and die near their natal wetlands. The same species that form migratory swarms are found in static swarms.

Scientists who study dragonfly migration find that dragonflies and birds are on the same page. Tiny tracking devices that were glued to the abdomens of green darners allowed the dragonflies to be tracked by air. It was discovered that like birds, dragonflies use weather fronts to initiate migration and will take advantage of a tail wind associated with a cold front (but both avoid really windy days). Both will alternate flying and resting days, and both follow visual landmarks. The cool weather in the first week of September got both the dragonflies and monarch butterflies started. 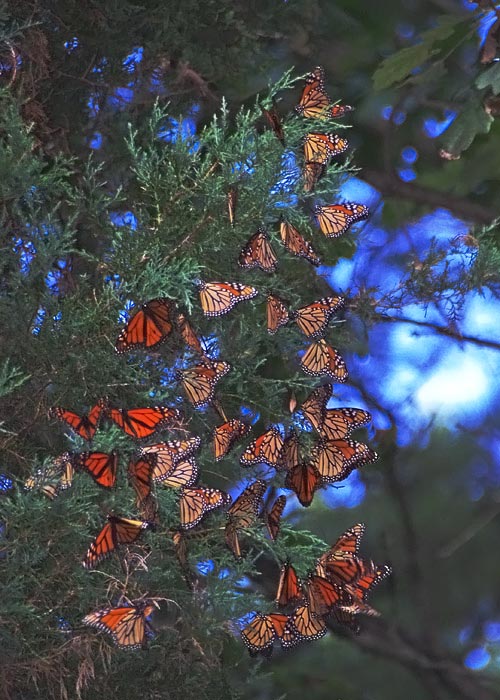 The Lake Michigan shoreline provides an excellent pathway for migrating dragonflies. The BugLady spent an exhilarating hour recently in the midst of a bunch of dragonflies (mostly darners) and monarch butterflies at a beach near Cedar Grove, WI. It was late on a cool afternoon, and the monarchs were packing it in for the day, flying up into the darkness of the cedars to roost overnight. Some dragonflies were garnering the last bit of warmth from the sand, and others were snatching a few more insects from the air. Still others were tucking in for the night, like the immature darner with its head in the juniper (darners perch vertically). The BugLady crept along the sandy trail with her camera, trying to spot darners before they saw her–the final score: Dragonflies–lots; BugLady–zip. It’s possible that they were thumbing their tiny noses at her as they exploded from plain sight among the beach grasses. 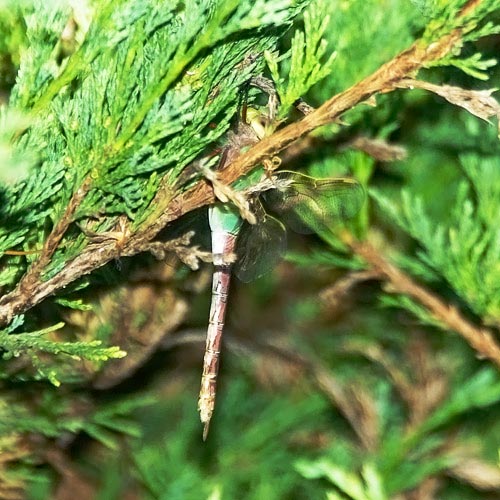 An hour at the bluff-top parking lot at Concordia University, near Mequon, on a calm, warm migration day in September is a religious experience, with thousands of darners and saddlebags floating past at eye level. 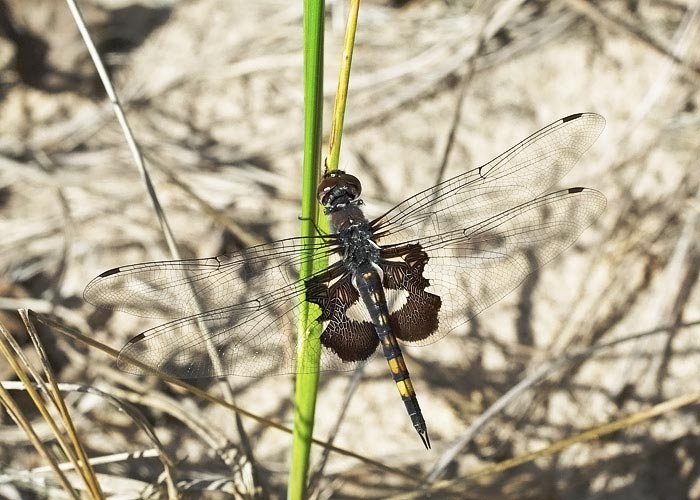 Hawk watchers report that the migration of America’s smallest falcon, the kestrel, coincides with green darner movements. Dragonfly calories–and so, indirectly, mosquito calories – fuel the Kestrels on their journey south.