After a recent BOTW episode about dragonflies, the BugLady was asked about the origins of the names “dragonfly” and “damselfly,” and whether the psyches of male damselflies are damaged by bearing a petite and maiden-like “girly” name, or if female dragonflies are bothered by having the “burley” name of a husky predator. In short, are scientists—and the etymology of entomology—politically incorrect? Whew! The BugLady is almost positive that the questioner was sincere and not just trying to make trouble, and although it is a query better suited to Dr. Phil, she will attempt to address it. 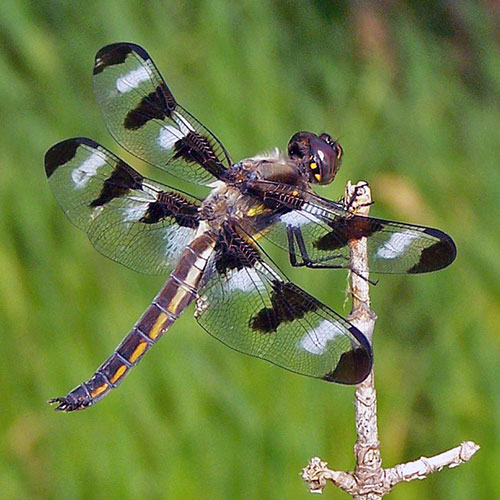 The BugLady loves to ferret out the stories lurking behind the names (wait till you hear about caddisflies!), and here’s what she found in Broadsides from the Other Orders by Sue Hubbell. The word “Dragonfly” is probably taken equally from mythical dragons and from the Greek dragon, drakos—the dragon of fly, which had a “terrible eye” (Dragonflies seem to be all compound eye, and some of the darners have an eye-shaped mark on the top of their heads). Hubbell also says that the translation of Anax junius, which is the huge Common Green Darner, is “Lord of June.” And, she points out that both immature and adult dragonflies are voracious carnivores, snatching up prey “in a dragon-like way.”

Anyway, the Dutch name for the Odonata, the dragonfly/damselfly group is juffer (little miss); the Germans call all Odonates “Wassernymphe” (no umlauts, thank you); and the French name demoiselle, from the Old French (AD 1520) word dameisele, means a young lady/damsel (unmarried), a damselfly, and a damselfish.

True to their German name, the nymphs live in the water. There they spend their allotted days, scarfing down anything that’s smaller and slower-moving than they are; they’ll even take tadpoles and fish. They are “sprawlers,” crawling on pond bottoms and plant stems looking for prey. When they need speed, dragonfly nymphs can practice jet-propulsion. They take in a gulp of water and expel it abruptly from their abdomens, causing them to move forward rapidly (the BugLady is trying to be delicate here). In some parts of Wisconsin the nymphs are called “Thunderbugs” and are sold to fisherpeople as bait.

When the nymph has had enough (time and food, that is, which may take from one month to five years, depending on the species and the environment), it climbs up on some vegetation above the water level, splits the skin on its back, pulls its adult body out of the nymphal shell, pumps up its wings, and never enters the water again (except maybe for the tip of its abdomen at egg-laying time). Adults hunt, often from regular perches, by scooping into their legs the insects they spy flying across sunny spots.

The Pennant, White-tail and Twelve spotted dragonflies are all examples of sexual dimorphism, from the Greek, dimorphos, having two forms.

Patches on the wings may shade the thorax on hot days!

The BugLady is considering getting a dragonfly tattoo, but not in a spot any BugFan will ever see.