This Dogwood twig borer (Oberea tripunctata) missed the recent “Dining on Dogwood” episode simply because it wasn’t foraging among the dogwood’s white flowers; the BugLady found it in early July on a prairie plant (there was probably a red-osier dogwood nearby). 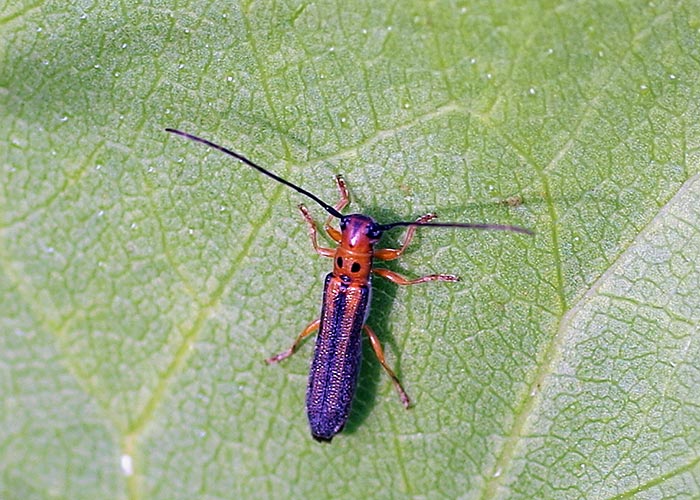 The Dogwood tree borer’s name is a study in confusion. Despite its common name, its larvae have catholic tastes and are at home on a variety of woody plants including plum, viburnum, willow, mulberry, elm, laurel, dogwood, fruit trees, and blueberry and it’s also called the Elm twig girdler. Although it received its scientific name (Oberea tripunctata) in 1787, that name was inadvertently given to a second beetle (the Raspberry cane girdler) in 1847, and the two beetles shared it until someone caught the mistake 30 years later (there’s also a Dogwood borer that’s a moth). It is a Cerambycid (long-horned beetle) in the subfamily Lamiinae, the Flat-faced longhorns.

It’s a trim little beetle, a little less than a half inch long, and it can be found from the Atlantic through Kansas and the Dakotas. In the East, it lives where Flowering dogwood grows, and although it’s not considered a serious pest, much of the on-line literature about it comes from Extension/Exterminators in the Southeastern states, where they take their Flowering dogwood seriously.

The Report of the State Entomologist on the Noxious and Beneficial Insects of the State of Illinois (1908) chronicles the “twig borer” part:

Among the insects whose nice and elaborate instincts connected with the placing of their eggs are the wonder of entomologists, we must class the twig girdlers, for their careful preliminary operations are such as to suggest a knowledge of vegetable physiology and the prevision of possible difficulties in the way of the development of their young certainly quite beyond the powers of insect intelligence, and an unsolved puzzle if regarded as a product of natural selection. The twig-girdler of the dogwood is an example. … prepares a chosen twig for the reception of the egg by first cutting a groove around it a few inches from its tip in such a way that the twig presently breaks off at this point, and afterwards making a second girdle, not so deep as the first, and from two or four inches farther back. It then makes two parallel cuts, about a half an inch long, lengthwise through the bark between the two girdling incisions, and at the proximal end of these makes a short transverse slit in a way to form an angular flap, beneath which it pushes its egg. The effect of all this surgery must be to stop the growth of that part of the branch operated on, and to check the flow of sap to the section where the egg is laid. … The eggs hatch within a week or ten days, and the young larvae penetrate the twig, burrowing downwards toward its point of attachment, and making holes to the surface at intervals thru which to discharge their excrement.

Why the slicing and dicing? The various cuts ensure that the larva will live in a sap-free zone, and another benefit is listed in an account of the Raspberry cane borer in the Forty-second Annual Report of the New York State Science Museum (1888), which says “It is supposed that the purpose served by the girdling is the arrest of the circulation of the cane in the portion thus treated, to the extent that the tender egg deposited therein may not be crushed by the vigorous and rapid growth of the tips at just this season.”

The result of all this slitting and chewing and boring can be defoliation, death of the tips of the shoots, girdled stems, wilting leaves, and separation of internal layers of the twig. In smaller shrubs like blueberries, the larva may continue its journey down the stem into the root crown, killing the above-ground portion of the plant.

Adults feed on dogwood leaves (including those of red osier dogwood), making small holes along the leaf veins. To see some beetle work, click on the pictures to magnify them Bark and Wood Boring Beetles of the World.

Not only do the legless larvae jettison their frass through holes in the bark as they tunnel, they get rid of the sawdust created by their excavations in the same way. They overwinter as larvae within the twig, in tunnels that are plugged with frass at both ends, and when it’s time to pupate in spring, they do so in a chamber that is similarly sealed. Depending on where they live, Dogwood twig borers’ life cycle may be a year (the South) or two years (Minnesota) or even three, mostly spent in the larval stage.

Despite being hidden in twigs, the larvae are found by woodpeckers and are parasitized by several wasps. In one study, between 50% and 80% of larvae were parasitized.

Thanks, Becca and Joe and Mary.